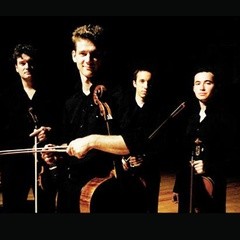 The Ebene String Quarter offered a mixed program of jazz and classical music.

They started with Mozart’s “String Quartet No. 15 in D minor, K.42” and Tchaikovsky’s “String Quarter No. 1 in D, Opus 11.” The performances were followed by warm applause and a sprinkling of Standing O’s.

We noted a stream of patrons exiting during intermission. It seems that they were just not interested in the second half of the program “Fiction” which featured jazz improvisations.

This divided classical/ jazz programming is a part of a major rebooting of Tanglewood. With great dismay, the decision was made to terminate the annual, season ending, Labor Day weekend Tanglewood Jazz Festival. It has not been clear whether this is an end or hiatus for the festival which provided a mix of mid level and emerging artists. Part of the  struggle to sell tickets was a lack of commitment to booking major artists.

While we greatly miss the loss of the Tanglewood Jazz Festival some of that sorely missed star power has now been programmed into the regular season. Labor Day Weekend will feature a more Pops/ Rock high profile mix in the Shed. If all goes well it has the potential for a stronger box office than the struggling festival.

A major difference is that for this Labor Day there are three strong bookings in the Shed compared to fewer seats for a Jazz Festival in Ozawa Hall.

A couple of years ago we enjoyed Herbie Hancock in Ozawa Hall and, before that, a mid week, fairly light attendance for the perennial Tony Bennett.

Recently, we attended a sensational performance by Chris Botti for whom jazz is an aspect of his music which also includes classical and pop inspired arrangements. But he floored scoffers with some hard bop and a séance evoking the shade of Miles Davis.

For the most part we enjoyed the ersatz jazz of the classical Ebene Quartet. But it underscores one of the problems of the now defunct TJF. Every effort was made to book artists conflating jazz and classical. That often made for tepid listening.

To quote Duke Ellington “It don’t mean a thing if it ain’t got that swing.”

On Monday, August 20, we are excited to anticipate hearing the Wynton Marsalis Quintet on a program including Christian McBride with Christian Sands and Ulysses Ownes, Jr. That should be just sensational.

Jazz pianist Chick Corea is paired with vibes player Gary Burton for Sunday, August 26. The Harlem String Quartet (more of that ersatz, jazz/classical bit) will serve as the opening act.

Over the rock accented Labor Day weekend Pops will feature Michael Feinstein, Betty Buckley, and Christine Ebersole in a season-ending “American Songbook” concert on Sunday, September 2.  That will be awesome.

The jazz efforts of The Ebene Quartet were charming, heart felt, and utterly entertaining. Cellist Raphael Merlin’s conversation with the audience was quite seductive. There is that je ne sais quoi about a French accent.

He described how it is “pretty cool” to return to Tanglewood for its 75th anniversary season. This followed a performance of “Footprints” by Wayne Shorter.

Playing pizzicato on cello Merlin recalled the approach of bass player/ cellist Ron Carter. In addition to plucking the strings and laying down a walking bottom line he also occasionally strummed the cello with guitar like flourishes. Through the “jazz” portion of the program Merlin proved to be the heart and soul of the quartet with the other three  players supporting him in unison or taking turns at riffs and solos. By far, Merlin has the most pure jazz feeling.

There is a  venerable tradition of French jazz artists- Django Reinhardt and Stephan Grappelli- as well as accompanists for ex-pats like Sidney Bechet and Coleman Hawkins. But French jazz has its own distinctive Gallic flavor as was the case with the Ebene Quartet. Part of it is being too schooled rather than gut and blues based. Great jazz isn’t cerebral. You have to feel it.

Corea, and Burton, however, can think like crazy and still blow your socks off.

The Ebene cats followed with a nice take on the standard “Nature Boy.”

Again, Merlin spoke with the audience. He described how French television does a so so job promoting classical music, including  an annual special. They were invited to participate but the producers wanted them to perform music from the sound track of Pulp Fiction. It seems that the theme of the broadcast was a focus on American music.

Initially, they balked, but when we heard their arrangement it was actually pretty groovy.

That was followed by an arrangement inspired by another quartet “Four lads from Liverpool.” Their version of “Come Together” was intriguing.

It seems it was getting late and the quartet hadn’t had dinner. So Merlin announced a couple of Miles Davis standards then see yah.

It was an interesting arrangement after the Miles classic album Kind of Blue. We caught some tasty phrases of “So What.” Chris Botti had made a similar Davis tribute during his recent gig. So there was some interesting compare and contrast.

The audience insisted that they return for an encore.

Humorously Merlin said “Didn’t I tell you we were starving?” He then described a CD that included four female singers. The quartet broke into an a capella chorus of falsetto “Some Day My Prince Will Come” from Disney’s Snow White. Then they wailed into it with spoofy fun on their instruments. Camping it up and sending us home with a smile.

Yeah, ok, it was wicked cool. Those French dudes were, hands down, chick magnets.