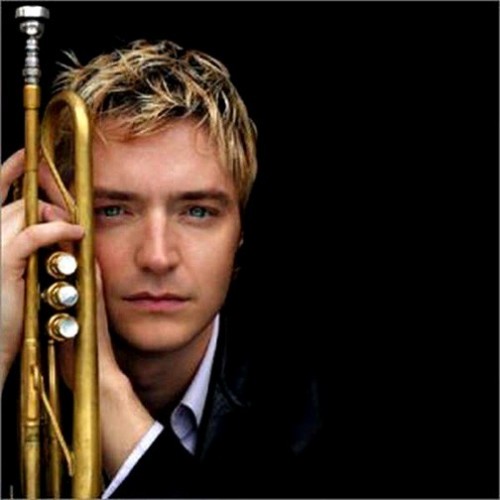 Chris Botti and his band returned to Tanglewood for a stunning performance. 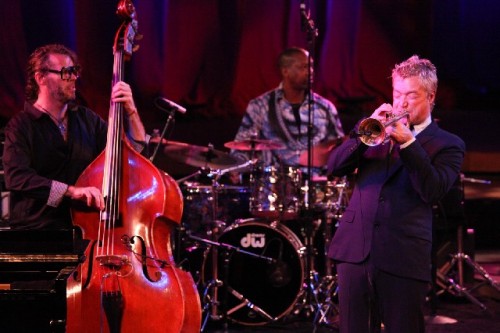 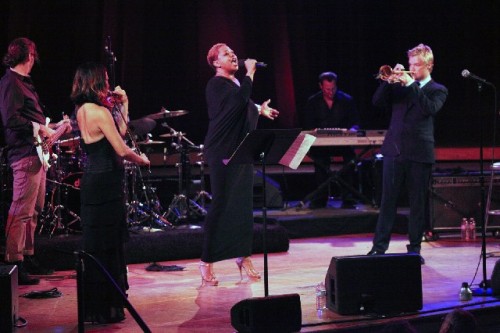 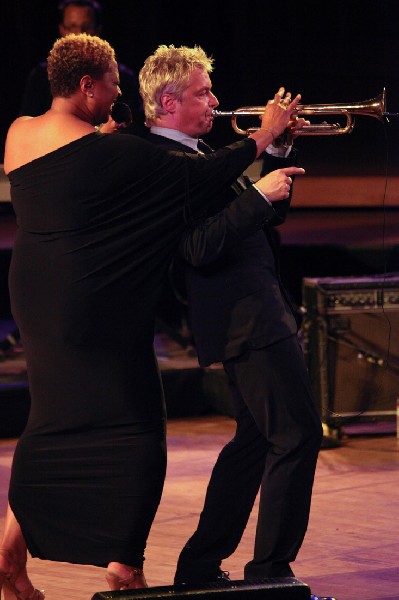 A playful Fischer and Botti.

The two hour and fifteen minute set by trumpeter, Chris Botti and his all star band, delivered a torrid performance in Ozawa Hall as well as the mayhem of forces of nature unleashed in an intense downpour.

Arriving early we enjoyed a Sunday stroll of the manicured Tanglewood campus. There were a large number of fans spread out on the hill that slopes over the open end of Ozawa Hall. We paused to visit  a family with two toddlers hunkered down under a large umbrella/ tent. They seemed well prepared with an eye toward the ominous sky.

Just about show time the heavens unleashed; oddly conjuring The Tempest in performance at Shakespare & Company just down the road. Even in our seats near the stage we felt a soft spray from the torrential but fortunately brief downpour.

Without blocking exit lanes ushers allowed as many as possible to take shelter on the steps under the overhang or standing room at the back of the balconies.

It made for a tight, densely packed, cozy and damp Ozawa Hall when Botti came on stage just after 8 and departed at 10:15 pm. The varied program began and ended with arias closing with a stunningly sensual “Nessun Dorma” from Turandot with an aspiring, musician, a nine-year-old girl, invited from the audience to sit in on percussion. It was typical of  playfulness throughout the evening which charmed and delighted the audience.

With CD sales of three million plus Botti is regarded as the currently most successful and popular jazz artist. But he is both more and less than that. Jazz purists quibble about his populism. Artistically his range of interests expand far beyond the niche of jazz to embrace film scores, arias, standards like “Ave Maria” to arrangements for Pops and adaptations of classical music. In each of these seemingly disparate genres, however, there is no debate regarding his passion, gorgeous tone, technical prowess, insight, and commitment.

During the long program he often spoke with the audience offering respectful anecdotes and cameo introductions for his remarkably skilled accompanists. This started early in the set when a sensual ballad “If I Fall in Love” was followed by an extended piano solo by Grammy winner, Billy Childs. He kicked it around trading accents with what Sting described as the “Badass drummer” Billy Kilson. We learned that the superb bass player, Tim Levebvre, who switched off between acoustic and electric instruments, is a native of Foxboro. The keyboards and sythensizer player, a one man orchestra, Andy Ezrin, is a native of Newton, Mass.

While in the studio to record the recent Impressions Botti recruited the renowned Brazilian guitarist Leonardo Amuedo. He was convinced to stay on with Botti’s band which will reach its 9th year of touring in February. For this occasion special guests were Lisa Fisher, for 19 years a backup vocalist for the Rolling Stones, and classical violinist, Serena McKinney.

During Childs’s segment Botti laid back roaming the stage and allowing his sidemen to cut loose. Then he faded back in trading rhythmic riffs clustered around a flurry of High C’s. That slipped into a few bars of the jazz standard “Moanin,” but just a flirtation, then out again for jamming improvisation. Botti flashed his bop chops setting to rest any doubts about his jazz bona fides.

Botti’s Italian father took the family to Italy for several years when he was a boy. Perhaps this explains his love of opera and classical music. At the beginning of his career he toured as the opening act for Sting with whom he has enjoyed an artistic relationship. He informed us of the joy of touring in Europe. He revealed a vow to spend time in Poland where he has performed some 13 times with his band.

This led to a commission for a Chopin anniversary which resulted in an arrangement of his “Prelude No. 20 in C Minor.” For this he was accompanied by McKinney. It sounded just gorgeous given the rich acoustics of Ozawa Hall. The Chopin is included on the new Impressions CD from which he played several selections. Including “Per Te” performed by Andrea Boccelli on the CD and the versatile Fisher at Tanglewood.

As a twelve year old, Botti first heard a Miles Davis recording of “My Funny Valentine.” It inspired him to study trumpet. He introduced a tribute to Miles with two selections from his finest albums Kind of Blue and Sketches of Spain. Both had a flamenco tinge with Amuedo providing galvanic passages particularly excerpts from the Rodrigo “Concerto for Guitar and Orchestra” which inspired the Davis/ Gil Evans arrangement of Sketches of Spain.

From the 1959 Davis classic Kind of Blue Botti performed “Flamenco Sketches.” You could shut your eyes and swear that is was Miles on stage. There was that same, loving, note-for-note homage to the greatest of all jazz artists. This went beyond simulacrum to reincarnation. The playing was just sublime. What started as a pure tribute then took off in a jam when Botti and his band blew it open.

He would return to Sketches but separating them was an interlude featuring Amuedo. With humor Botti recalled asking the renowned Brazilian guitarist what they might add to the Impressions album? The answer was something from Michael Jackson. I’m not sure whether that was a joke. I didn’t recognize what followed but it wasn’t a Jackson standard. That led to a more familiar tune, the lovely “Hallelujah,” by gravel voiced poet/ songwriter Leonard Cohen. It also set us up to appreciate Amuedo’s Rodrigo inspired playing in a passage from Sketches.

For another change of pace Botti introduced Fisher. She opened with the Gershwin’s “I Love You Porgy.” It compared favorably with the version of Audra McDonald which we heard, just a year ago, at ART on its way to Broadway. Fisher has that kind of chops.

Playfully, Botti and Fisher took “The Very Thought of You” out into the audience. He asked in vain for some house lighting. At one point he was so close we could have touched him. A tall, large woman, she literally landed in the lap of an elderly but clearly delighted gentleman who gave her a juicy kiss. Never missing a beat Botti leaned over to the woman next to him and asked “Are you his wife?”

Back on stage they continued with “La Belle Dame Sans Regrets” from the Sting album Mercury Falling. Botti spoke of his collaborations with the opera tenor Andrea Bocelli and upcoming plans to perform together. He performed “Italia” the title track from a best  selling CD.

Again displaying eclectic diversity, Botti told us of his love of film scores by the composer Ennio Morricone. “I go back and forth on my favorites” he said before performing from Cinema Paradiso.

It had been a long evening but the audience was still hungry. He obliged with dessert in Puccini’s “Nessun Dorma” one of the most sensual arias in all of opera.

We drove home completely satisfied after an intimate, charming, and magnificent evening with one of our greatest living artists. In particular, thanks for that séance with Miles. Haunting.