Arlo and the Guthrie Family Headline 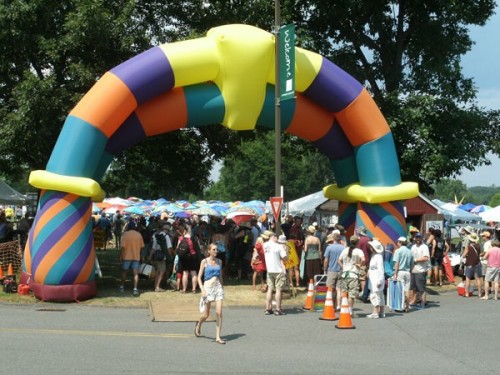 Off the bus and ready to dive in... 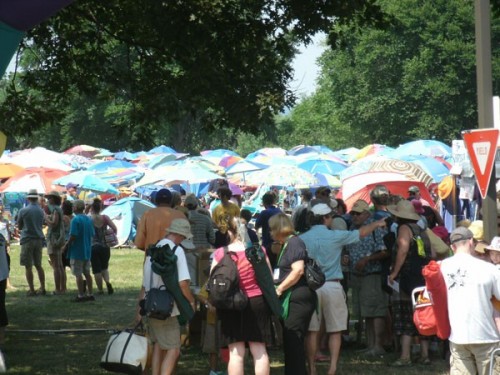 Yikes! It is too much to take in all at once. 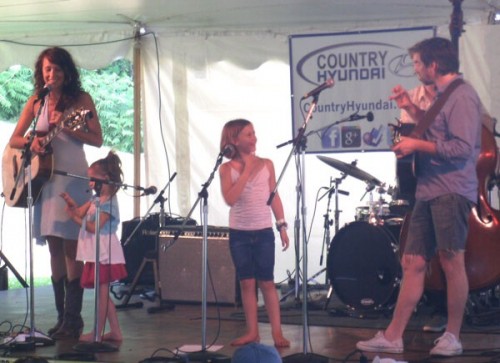 Sarah Lee Guthrie and Johnny Irion with their daughters. Since I last saw them in October the young-uns have picked up a lot of stage craft and stage presence. 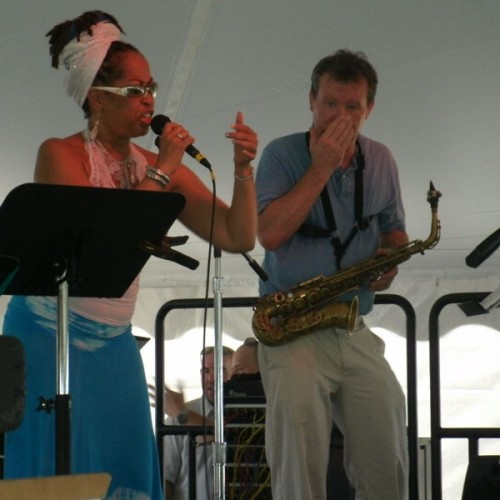 Samirah and one of her Handsome Devils. 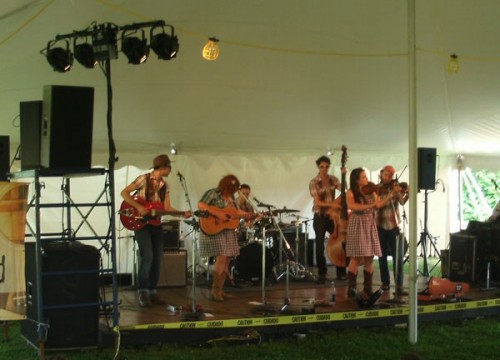 Emily and Zara wailin' out Yonder 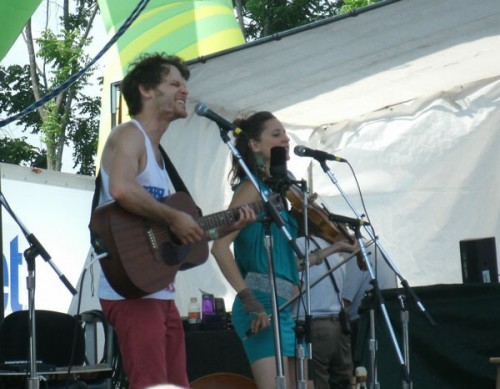 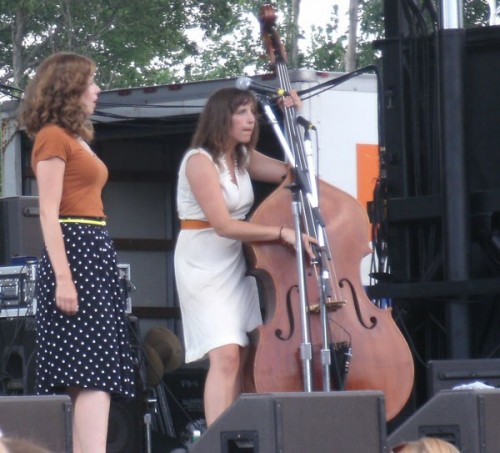 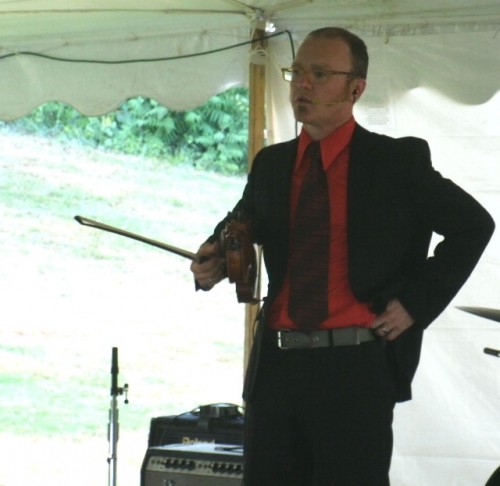 Casey Driessen contemplates some string theory of his own conception. 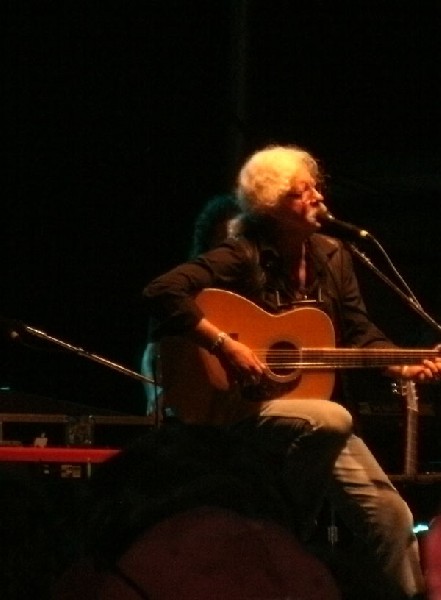 Arlo, now the patriarch of the Guthrie Family, paying tribute to his dad and closing out Saturday's performances. 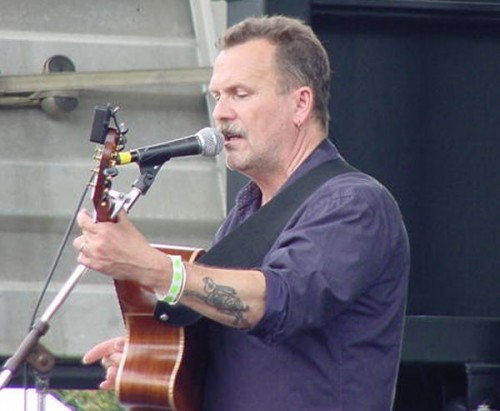 Martin Simpson, guitar royalty, opened the Sunday performances and set the mark high for those to follow. 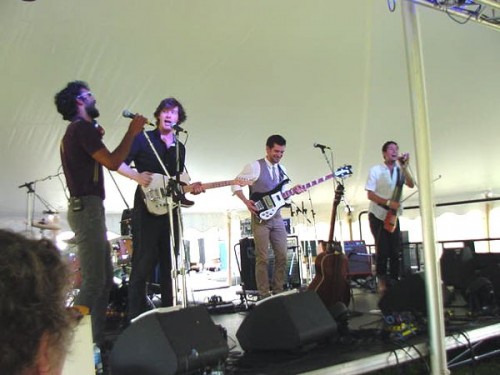 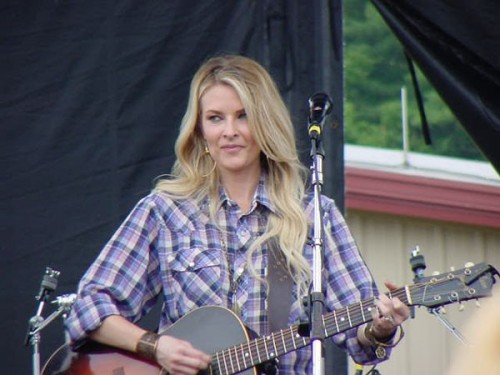 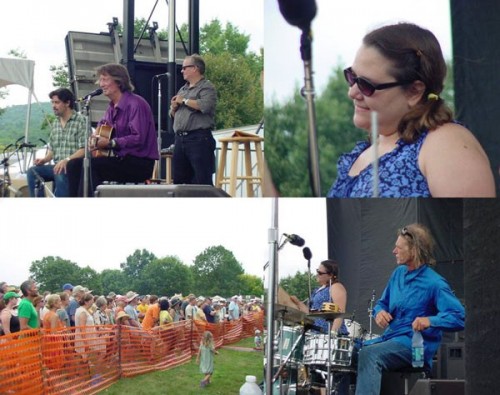 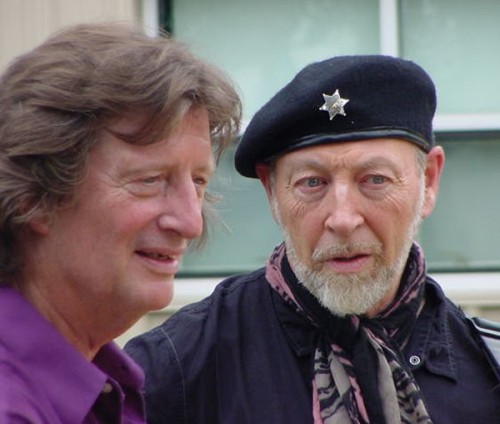 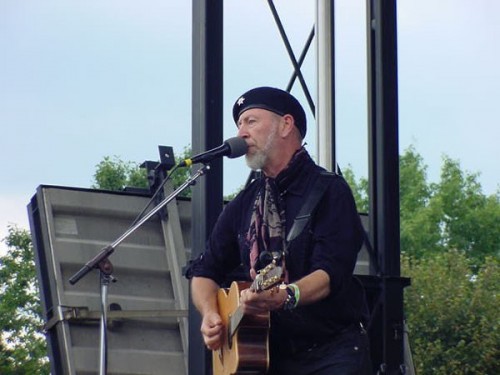 Take stage, take command of audience, nothing to it... 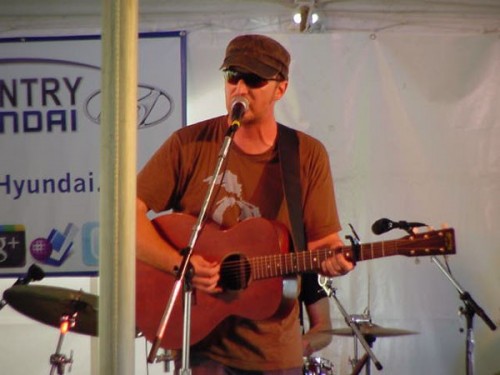 Peter Mulvey on the Meltdown stage. 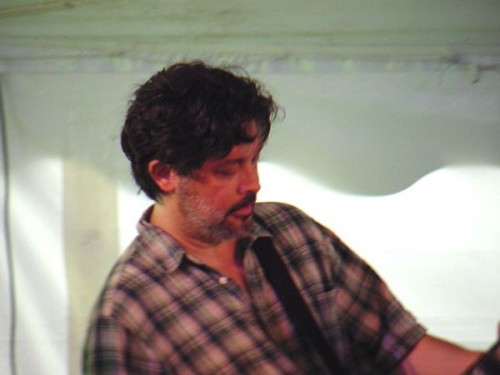 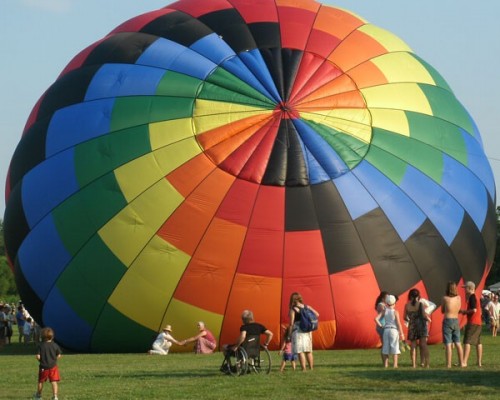 a balloon comes to life 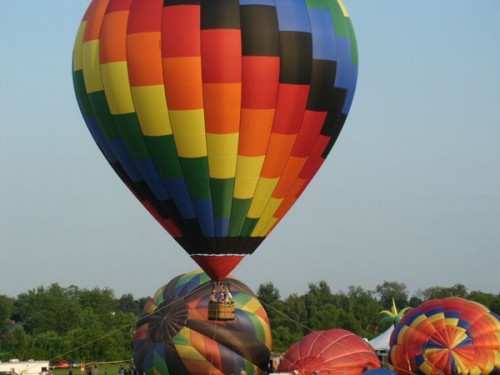 soon to be joined by its brethren... (all photos by David Wilson)

In the past, long in the past, I regularly attended music festivals as a matter of course and was involved in the production and running of several. With a “been there, done that” attitude I have long avoided them as a matter of course. When I unexpectedly came across the line-up for last weekend’s Green River Festival in Greenfield, MA, my reservations about festivals dissolved and I inquired of the organizers the possibility of press credentials. After some back and forth-ing , I managed to get on one list for Saturday and another for Sunday. Within hours of settling all that, I began to wonder if I could find the stamina to meet the task. I was by that time committed to trying.

Arriving at the Festival’s parking lot and shuttle service, I was immediately impressed by how efficiently the buses were loading up and moving out. My bus had a guitarist sitting up front serenading us all for the 10 minute ride to the festival entrance. My fellow riders were burdened to the extreme with all manner of picnic accoutrements, coolers, umbrellas, chairs, canopies, all organized in such a way that I realized they must be seasoned veterans of such events.

Disembarking the bus and turning toward the Festival entrance I was confronted by a field of colors, row after row of primary and pastel shades incorporated into the already erected aforementioned accoutrements. I felt the excitement even before I was issued my admission bracelet and walked through the gate as Sarah Lee Guthrie and Johnny Irion performed on the main stage. It all felt quite magic and I felt that way for most of the weekend.

Before I tell you about the music and the musicians let me say a few things about the Festival and its organizers. I know a little bit about what goes into running such events and this was hands down, the best managed festival I have ever attended, with the friendliest and most helpful staff that I have ever encountered, and probably much for those reasons, the best mannered attendees with whom I ever shared an event of this magnitude. From infants to seniors, all were there to enjoy the music and the ambience and to contribute to it as well. This does not occur by chance. It comes from careful planning and by examples set by an administration that knows how to lead, instead of drive, their staff. It is no wonder that this festival has been an annual event now for 26 years.

It was certainly a coup to have Arlo and the Guthrie Family headlining the opening day of the festival on the actual 100th anniversary of Woody’s birth.  Arlo’s daughter, Sarah Lee with husband Johnny Irion kicked off the day on the main stage, reappeared mid afternoon with their daughters at the smaller Meltdown stage, and again in the evening with Arlo and the rest of the family for the day’s closing  performance. The mix of Woody’s tunes and some of their own originals was a delight.

In-between, I visited all three of the venues catching the fetching down home harmonies of the Sweetback Sisters and the rowdy, bluesy, Samirah Evans & Her Handsome Devils.

Heat and exercise taking its toll, I jumped the shuttle back to the parking lot and snagged a folding chair I carry in the back of my truck and shuttled again to the festival. I was just in time to catch David Wax Museum, a name of which I still can make no sense, but a duo of David Wax and Suz Slezak with a third stream roots synthesis that is Mexican flavored, quite stirring and begs repeat listening. I will be looking to hear more of them in future.

I set up my chair in the tree shaded surrounds to the right of the main stage and found that I could easily hear the performances. Sound was excellent if a bit loud at all of the venues, but “wall of sound” seems to be the rule rather than the exception for most performing acts these days.

Of further note on Saturday I would mention Lake Street Dive with their jazzy contemporary songs and  a big band sound surprising for their limited numbers. LSD is comprised of drummer Mike Calabrese, vocalist Rachael Price, trumpet-wielding guitarist Mike “McDuck” Olson and to my surprise, bassist Bridget Kearney, whose work with the Bluegrass band, Joy Kills Sorrow has long delighted me. I have no idea how she manages commitments to both schedules.

One other performance I found noteworthy Saturday was that of Casey Driessen with his 5 string fiddle and high tech accessories who offered  a mesmerizing percussive  performance notable enough to  convince me to follow up on his work after this weekend.

I left at the end of the day, plain tuckered and hoping I could recover in time for the Sunday schedule, the one which had tempted me from the beginning.

If not fully recovered, a night’s sleep had at least restored me somewhat and I was off, this time with the company of my wife, to Sunday’s program.

Now as a veteran, and with a partner to help in the lugging we arrived and set up in the shade before the first performance.

At the end of his set we trudged off to the Yonder stage to catch Darlingside. This local group from Amherst had released an EP almost two years ago that intrigued me with its synthesis of a number of world music themes and pop/rock style. Sunday’s performance showed me they had become much tighter and coherent, though they designed their set to appeal to a broader and less attentive audience than that on their EP. Their choice was validated by a steady stream of arrivals drawn mostly from the main stage audience where Elizabeth Cook was performing. Fun, high energy, interesting lyrics and musical blends, Darlingside is a band to keep your eye on.

Back at the main stage, Elizabeth Cook, was being warmly received and finished her set with a gospel tune, Samson and Delilah. I have always associated the tune with Rev Gary Davis and found Elizabeth’s version pale in comparison, especially since recently hearing Rory Block’s sensational cover in her recent Gary Davis tribute album, I Belong To The Band.

Chris Smither up next, accompanied by his rarely appearing side band, The Motivators, tore the house down, if you can say that about an outdoor concert. The fence in front of the stage was bowed with people pushed up against it to get a closer look and to take pictures. His performance engendered the loudest and most sustained response of any I heard the whole weekend long.  Featured of course was the title tune from Chris’s new CD, Hundred Dollar Valentine which we recently reviewed here. Few performers were permitted an encore, but Chris was one of them and only the promise of living legend, Richard Thompson, to follow quieted the audience’s call for more.

Richard, in turn, captivated the crowd with selections reaching nigh back to his Fairport Convention days as well as with more recent compositions and again the audience was loathe to letting him go. Richard remains one of the strongest and most consistent genre performers to come out of the ‘60s and it was a genuine pleasure to hear him live again.

We hustled then to the Meltdown stage to catch the always intriguing Peter Mulvey with side band Crumbling Beauties, strangely enough including main Motivator, Dave, Goody. Goodrich. He does get around. Peter was as gratifying to hear live as his recordings had suggested and I look forward to hearing a lot more.

By this time, my stamina was a memory and we forsook some fine acts to follow, Winterpills, Rubblebucket , Ozomatli  and CJ Chenier in favor of finding our way home to unwind and for me to figure out just how I could describe coherently such a wonderful musical weekend.

I would, given time and space, love to ramble on about the great food booths and a Bart’s Ice Cream stand just a few yards walk from wherever we might situate. I would talk about the kids playing in plenty of space with kites and Frisbees and all manner of spherical objects and with nary a squabble that I witnessed. I marveled that only once in the course of the weekend did I catch a whiff of the weed and though I looked all around carefully was unable to identify the source nor was their any obvious imbibing of alcohol. The only other thing I did miss was the once common clusters of musicians and jam sessions that I used to associate with music festivals. That is something I will have to ponder.

…and the balloons, big balloons, the kind you take rides in… beautiful, lovely, blossoming on the ground and rising into the sky balloons. Well I will let the pictures speak to that.

Meanwhile I am already marking my calendar for next year and Green River Festival 27, and thinking I may have to go into training a few months in advance.