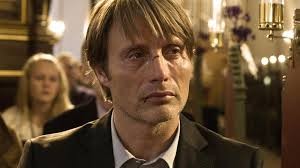 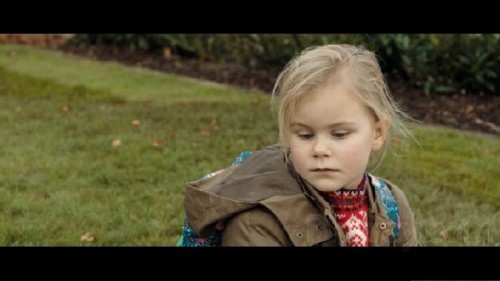 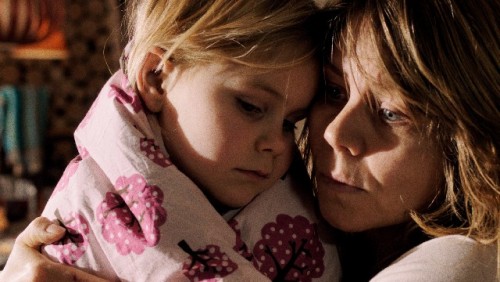 Klara comforted by her mother. 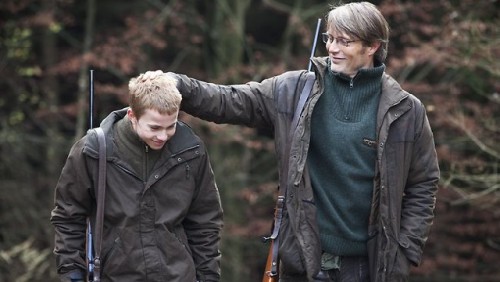 Lucas is a good father to Marcus. 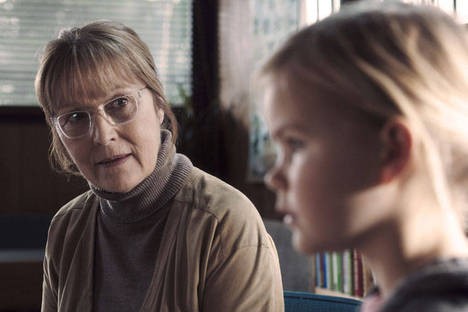 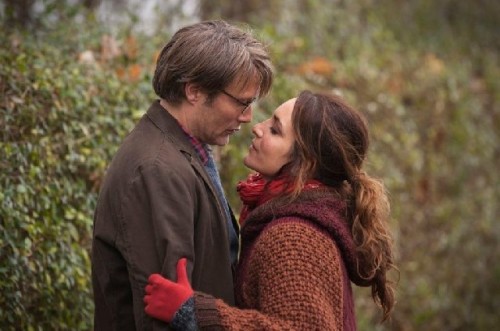 Briefly Lucas has a girl friend whom he rejects when she doubts his innocence. 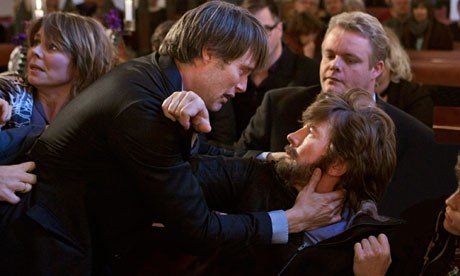 A conflict during Christmas mass.

The stone faced, handsome Mads Mikkelsen is most familiar to audiences for playing James Bond’s nemesis in Casino Royale and as Hannibal Lecter on the television series Hannibal.

Restraining a sang-froid persona behind a chiseled, sculpted mask of a face this seemingly inscrutable actor portrays a compelling criminal or serial killer. He conjures the keen intelligence of a Hannibal Lecter with the cunning and manipulative skills to deceive and disarm all those who would mess with his characters.

In the compelling Danish film, The Hunt, director by Thomas Vinterberg we find an astonishing depth and range to his creativity.

Here, he plays not a menacing criminal, but a nice guy and kindergarten teacher, Lucas, who is wrongly accused of sexual abuse by the daughter of his best friend. The child has confused feelings and makes a devastating comment overheard by the school’s principal.

As the plot unravels there is a chilling resemblance to sensational cases of alleged sexual abuse in day care centers and kindergartens. There were many similarities to the hysteria and media witch hunt of the Amirault family which ran Fells Acres in Massachusetts.

Later in a playful moment, as Lucas the teacher likes to fool around with the kids during recess and playtime, she impetuously kisses him on the lips. Carefully, he tells her not to do that with anyone other than mommy and daddy. Klara (Annika Wedderkopp) confuses this with rejection and tells the principal that she hates Lucas.

Lucas is sent home because of an alleged incident. The principal refuses to be specific and protects the identity of the child. The girl is later questioned in a manner that is so leading and graphic that the principal vomits in a waste basket. The principal calls a meeting with parents and paranoia spreads resulting in numerous false accusations.

We know that Lucas is innocent and are horrified by the manner in which he never is allowed to defend himself or face accusers. He is assumed to be guilty before being proven so. The entire village turns against him including his best friend. When he attempts to shop for food he is assaulted. Rocks are thrown through his windows and his dig is killed.

We see that Lucas is a nice guy and caring father of Marcus his teenage son caught up in a nasty divorce. There is a friend, the godfather of Marcus, who stands by him. A new girlfriend has doubts when the accusations surface and Lucas throws her out.

This horror story, a life ruined by a confused child, is all too plausible. We wonder about the principal and her motivations. Rather then seek the truth her leading questions and unprofessional approach fan the flames playing into the worst nightmares of parents.

The stories of his assaults grow ever more outrageous. Multiple children vividly describe the basement room where Lucas has assaulted them. When the police come with a search warrant it is discovered that his home does not have a basement. This is crucial in dismissing the charges.

While exonerated by the courts Lucas is not forgiven by his accusers.

There is an improbable confrontation between Lucas and his former friend during Christmas mass in the village. That leads to a less than credible, ersatz happy ending, then a surprise twist.

In 1984, a four-year old student at the Fells Acres Day School wet himself while taking a nap. Upon direction by the child’s teacher, Gerald Amirault changed the boy into spare clothing. Later, the boy was discovered playing sexually-suggestive games with his cousin. After being questioned about this by his mother and uncle, who himself had been molested as a child, the boy said that Amirault had sexually abused him. Shortly thereafter, Amirault was arrested.

The police instructed parents to question their children for signs of sexual abuse. These included bed wetting, changes in appetite and nightmares. The children were also questioned by police, social workers, therapists, and others.

Eventually, Amirault was charged with molesting more children, and charges were brought against his mother, Violet Amirault, and sister, Cheryl Amirault LeFave.

Gerald Amirault was convicted of assaulting and raping nine children and sentenced to 30 to 40 years in prison. His mother and sister were convicted of similar crimes against four children and sentenced to jail for eight to 20 years. Interviews claimed that the children were raped with knives, sticks, forks, and magic wands. They were assaulted by a clown (allegedly Gerald) in a "secret room" and a "magic room" where they were forced to drink urine and tied naked to a tree.

The bulk of the evidence was developed through videotaped interviews conducted by Susan J. Kelley, a pediatric nurse. The children repeatedly told interviewers, including Kelley, that nothing happened to them, that there were no secret rooms, and there was no clown. Eventually the children claimed all these things happened. One police officer, John Rivers, said at a seminar that interviewing the children was "like getting blood from a stone."

Consistent with this case history Klara attempted to state that Lucas had not harmed her. Eventually her father believed her. Significantly, the principal, parents and authorities, believed what they wanted to believe.

If an examiner insists on repeating and rephrasing leading questions the child wants to cooperate by giving the “right answer.” When rewarded and encouraged by having given the “correct” and “brave” response a child is likely to elaborate and give more detail as it is suggested.

In The Hunt the principal, who may indeed have sexual conflicts, asked the child to confirm vivid and graphic details of the alleged erect penis. Clearly, she lacked training and oversight resulting in a biased and amateurish inquiry.

When pursuing fact finding in the Amarault case an interviewer told a child that her friend had already testified that the clown had them take their clothes off. The girl being interviewed denied this happened. The interviewer said that she believed what the child’s friend told her. Kelley also rejected alternative explanations for events and ignored the children’s denials of abuse. The chief prosecutor of both of the Amirault cases maintained that "the children testified to being photographed and molested by acts that included penetration by objects ... the implication ... that the children's allegations of abuse were tainted by improper interviewing is groundless and not true."

Superior Court Judge John Paul Sullivan reduced Violet and Cheryl’s sentences, but the Massachusetts Supreme Judicial Court reversed that ruling in 1993. In 1995, after serving eight years in state prison, Violet and Cheryl were freed on appeal. A Lowell Superior Court judge ruled that their convictions were wrongful because they were not able to directly confront their accusers.

The Massachusetts Supreme Judicial Court reinstated the conviction, citing the need for "finality." While awaiting this verdict, Violet Amirault died. After this, another judge, the Honorable Isaac Borenstein, granted two separate motions for new trials. Judge Borenstein held that the children's interrogations were so tainted by "grave errors" in the investigation process that they could not be used in any new trial.

However, the MSJC once again ruled to send the women back to prison. In October 1999, the new Middlesex County District Attorney Martha Coakley and Cheryl Amirault LeFave reached an agreement whereby Cheryl would be sentenced to the time served and she was released from prison. In exchange, Cheryl agreed to 10 years probation, and also could not give television interviews, contact families of the victims, could have no unsupervised contact with children, or profit in any way from her trial and imprisonment.

The Massachusetts parole board recommended the commutation of Gerald Amirault’s sentence in July 2001. Acting Governor, Jane Swift, rejected the decision in February 2002. He was ultimately released from the Bay State Correctional Center on April 30, 2004.

The Hunt is in a field of five films nominated for Best Foreign Film. During the recent Palm Springs International Film Festival our correspondent Jack Lyons reviewed The Broken Circle Breakdown (Belgium), The Great Beauty (Italy) and Omar (Palestine). The fifth film is The Missing Picture (Cambodia). In the recent Golden Globe Awards the winner in this category was The Great Beauty.