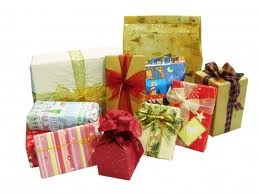 The joy of giving followed by many happy returns.

Some years ago I curated a video installation by a former student who went on to complete a graduate program at the Museum School.

Given her limited resources I was impressed by all of the equipment in the project. Some she borrowed from the Museum School. A number of large, then state of the art, Sony Trinitron, analog TVs were purchased for the exhibition.

She explained that they would be returned after the show.

That struck me as both amazingly clever as well as somewhat alarming.

Just what were the moral and legal implications of such a strategy? Was there an element of fraud or even criminal liability?

Of course, when purchasing Christmas presents my wife has emphasized the importance of keeping the receipts.

Post Holidays we are now in the thick of the season of returns.

The evening news reported that Holiday sales, which had been anticipated to increase some 2.5%, in reality proved to be a modest and disappointing .7%. There was spin on just why. In the Northeast, which represents a large chunk of retail sales, homeowners were spending on repairs from Sandy. That meant less cash for gifts. There was also the somber impact of the massacre at Newtown which put a dark cloud over the national spirit.

In the give and take between the anchor desk and the field reporter there was banter about how annual sales figures might further be adjusted. What wasn’t spelled out was the impact of the ritual of returns. If there is a Black Friday, the traditional day after Thanksgiving which launches the feeding frenzy of Holiday shopping, might there also be a Blue Monday when stores are mobbed by returns.

During  these tough times consumers return gifts for cash, store credit, and the chance to snag post Holiday discounts as deep as 50 to 75%.

There is a strategy to all this but nobody wants to talk about it.

After almost twenty years together I find it ever more difficult to find gifts for my wife. The first decade was fairly easy. There were the predictable presents of jewelry from earrings to pearls. It helped that we were living in Boston which was noted for the amazing Filene’s Basement. She still wears the wonderful purple Irish sweater which was a real score.

But having run through all the obvious items each passing year gets ever more challenging.

The day before Christmas I finally made it to the local mall. Everything was on sale. But it was daunting and somewhat embarrassing to work through rack after rack of chick stuff.

A friendly sales lady initially inquired if I was looking for the plus sizes? Good grief, did she assume that I was a jumbo drag queen snapping up bargains? It was like so embarrassing.

No, I was actually looking for medium.

After a relentless, frantic, desperate search I found four items.

More or less assuming that they might be returned.

Cashing out I noticed that one might purchase special Holiday boxes with ribbons.

I asked that saleslady for some help.

She was too busy and passed me along to a nice young man.

Politely I implored his help.

Here was an opportunity to avoid one of my shortcomings.

For me, wrapping stuff is a nightmare.

Between the two of us we managed to get the items nicely boxed.

With the receipts inside.

On Christmas morning I was thrilled to hand over my colorful boxes.

But nervous as hell.

To my utter astonishment she liked all four items.

Not so with our friends who have developed returns into an art form.

So much so that I have suggested that they develop a reality TV show.

They think it’s a good idea and came up with a list of possible titles.

I suggested Many Happy Returns.

It entails not just strategies but a complex philosophy.

All about gaming the system as established by corporate America.

Playing by their rules but coming out on top.

Part of the strategy is working with a number of venues.

In rare instances purchasing a discounted item in one store and returning it for full price at another branch.

Really, I just wouldn’t have the nerve to be able to keep a straight face.

There is method acting involved.

Some standard lines include “The product was not what I expected.”

Like an expensive dress worn for a fancy occasion and returned the next day.

Or the former girlfriend who made me take back an expensive blouse to Ann Taylor.

The fun and exhilaration of a purchase followed by buyer’s remorse.

In my friend’s opinion I don’t mind getting screwed by corporate America.

You wonder if there aren’t counter strategies on the part of the merchants.

Like getting banned from Vegas casinos for getting caught counting cards.

Are there hidden cameras at the returns desks?

Our friends are from New York so they have a vast terrain to work with.

Not that they are poor.

They can afford to buy all this stuff.

But not to keep it.

Really it’s not about the money.

It’s consumer anarchy and a means of expressing rage.

You get to enjoy all that stuff for awhile.

After the Super Bowl party the  60” flat screen goes back to the store.

Where it goes on sale as an “open box” item.

A win win for the next consumer along the corporate/ retail food chain.

It’s another way of saying “a gift that keeps on giving.”