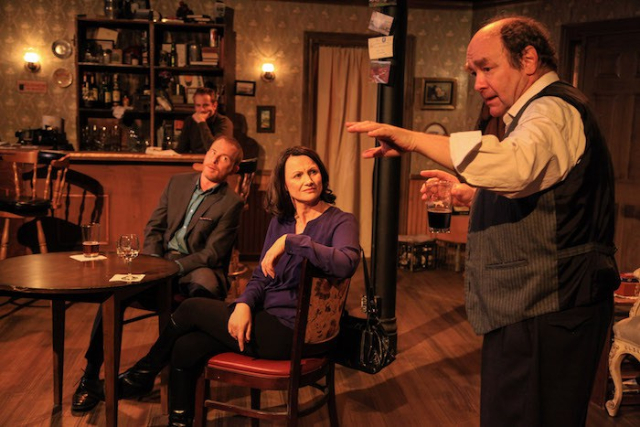 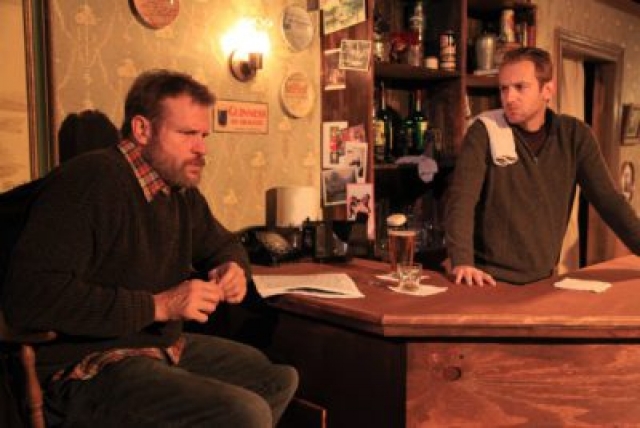 The Guinness tap may not be working tonight at the local pub, but the stout flows freely anyway in this tale of ghost stories and real-life emotion at Irish Theatre of Chicago.

Conor McPherson’s The Weir isn’t your typical Christmas play, but I’ll take it any day over any of the traditional treacly tales that grace our stages this time of year. Like McPherson’s The Seafarer, which this company (then known as Seanachai Theatre) staged in 2013, The Weir has a holiday season background.

When a new resident, a young woman from Dublin, visits the pub, the locals tell haunting stories to impress her, but it turns out she has a personal story that surpasses theirs and leaves them quieter and a bit sorrowful.

Finbar (Dan Waller), a local entrepreneur, escorts Valerie (Sarah Wellington) to the pub after taking her on a tour of some of the village’s highlights. Clearly he has an eye for her, even though he’s married. A sense of discontent permeates the mood of the pub, despite the overall jollity. Brendan (Bradley Grant Smith), the publican, feels a bit stuck because he can’t leave his bar, which is connected to his home, to do anything else. Jim (Jeff Christian) owns some property but doesn’t feel he can get enough for it to make a sale worthwhile.

The cast of this 105-minute spellbinder, directed by Siiri Scott, features some of Chicago’s finest actors. Brad Armacost, fueled by what I was sure was four bottles of Guinness plus a few “small ones,” plays Jack, a car mechanic and jovial gossip. At the end, he relates his own poignant story of a lost love in a quietly stirring monologue.

The Weir is a story of losses and missed connections, with a hint of hope at the end. The pub itself is a classic example of what urban sociologists call “a third place,” neither home nor work, but essential in community building. Through the course of the play, four of the five characters tell their own stories, in a tour-de-force demonstration of the Irish talent.

Merje Veski’s set design is a cozy pub, with bar, stools, a table and armchairs at the fireplace. Historic black-and-white photos line the walls and play a part in the story. Eva Breneman’s dialect coaching results in flawless dialogue.

There’s no credit for the bar creations, but I understand that the authentic-looking stout, poured from Guinness bottles, is actually dark, aerated iced tea. Truly a magic trick for the production stage manager, Jen Bukovsky.

McPherson’s 1997 play won the 1999 Laurence Olivier Award for Best New Play. The title refers to the name of the pub, which is named for a dam over a local river. McPherson’s other plays have often been produced in Chicago; they include This Lime Tree Bower, Port Authority, Dublin Carol, Shining City and The Night Alive. His new play, Girl from the North Country, featuring the music of Bob Dylan, will open in 2017 at the Old Vic in London.

The Weir, staged by the Irish Theatre of Chicago, continues at the Den Theatre, 1333 N. Milwaukee Ave., through January 22. Tickets are $26-30. Performances are usually Thursday-Sunday, except for holidays. See the website for the schedule.