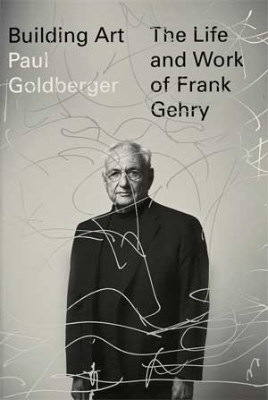 Paul Goldberger, former architecture critic of the New York Times, will receive the Architectural Journalism Award from the Society of Architectural Historians here Friday night. The award ties in to the release of Goldberger's new book, Building Art: The Life and Work of Frank Gehry.

This is Goldberger's eighth book, but his first on an individual architect. I had a chance to review his book and interview him recently. Goldberger spent 4.5 years and many hours in conversation with Gehry and his clients and colleagues in writing the book, published last month by Alfred A. Knopf.

The 528-page book tells the story of Gehry's life, growing up in Canada and moving to Los Angeles with his family when he was 18 because his father's health required a change in climate. In the preface, Goldberger tells how he became acquainted with Gehry in 1974 and wrote articles about his work over the years, which were published in the New York Times, Vanity Fair and the New Yorker.

Frank Gehry is probably best known for buildings such as the Guggenheim Museum in Bilbao, Spain (completed in 1997), and for the Walt Disney Concert Hall in Los Angeles (completed in 2003). Those buildings express the exuberant style of his later work, in which "he expresses forms that didn't exist before," in what Goldberger describes as "a mix of pragmatism and poetry."

You can view a slideshow of some of Gehry's spectacular buildings here (and click through the popup ads).

Can Gehry be categorized in one style or another?

How was living and working among artists in Los Angeles key to Gehry's career?

Living in LA, Gehry knew and worked with many artists and filmmakers and developed as an artist as much as an architect, Goldberger says. Gehry thought of his work as built art and was more interested in "creating highly expressive buildings." After the opening of Bilbao, "his name was all but synonymous with expressive form making."

Some architects are famously temperamental and difficult for clients to work with. How does Gehry work with his clients?

Goldberger said he found that the book project was almost as much about Gehry's clients as about the architect himself. Gehry's client relationships are really important. He's very flexible if he likes and trusts a client, Goldberger says. He'll use an iterative process and for some buildings, there could be hundreds of variations. He would show a client something at an early stage and then they work together to develop the ideas further. Gehry often wants to keep tweaking and changing the design, sometimes to the point of frustration for his client. Most important for Gehry is to have a sense of simpatico with his client. He wants to work with clients who believe in his type of work.

Goldberger mentioned several clients with whom Gehry has had great relationships.

How does Gehry create designs and use technology?

The Society of Architectural Historians presents its Awards for Architectural Excellence Friday at the Women's Athletic Club, 626 N. Michigan. The event begins at 5:30pm with a tour of the 1929 building designed by Philip Maher. Awards will be presented at 7pm, after a 6pm cocktail reception and auction. Tickets are $175.