At Ashby Stage in Berkley 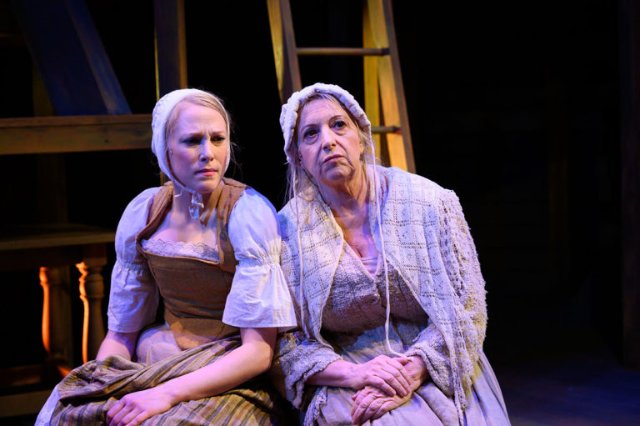 Two of the saddest commentaries about humanity throughout history and among most societies are the persistence of misogyny and never-ending prejudice with its associated discrimination. Caryl Churchill’s Vinegar Tom pulls no punches in its searing indictment of men as controllers of both sword and pen, and of the women who enable them. The play lacks emotional traction through its first half, but once the incidents that lead to accusations of witchcraft occur, it grips. For Churchill fans and those who appreciate the provocative and off-center, its insights will reward, though it will not please all.

The setting of the play is 17th century rural England, a time and one of the places where the witchcraft frenzy emerged. The central character, Alice, is the victimized lusty young woman, whose independence is resented by the standards bearers. Megan Trout plays Alice. Once a mainstay at Shotgun Players, she returns after a three-year hiatus to deliver her best performance in memory as she dominates the stage. Even before her somewhat choreographed litheness, she employs every bit of her body in an acting tour de force as a woman whose greatest sin is to want to enjoy life.

Alice and her mother Joan, portrayed by Celia Maurice, are accused of witchcraft after a dispute with their neighbors Jack (Dov Hassan – the only male in the cast) and Margery (Jennifer McGeorge). The small-minded sheep of society often attribute social troubles to non-conformists, and in this case, they blame Alice and Joan for Jack’s impotence, the sickness of their cattle, and even the failure of cream to clot into butter. Like witch hunts of all varieties, this shares the common theme of demonizing people who don’t fit the common mold. And the “good folk” of the community are only too happy to condemn the victims on trumped-up (this term chosen with intent) charges.

The plotline then follows a somewhat expected course, with baseless accusations and betrayals. The accused make false admissions resulting from exhaustion, frustration, and promises that admission will lead to mercy and redemption. Physical tests with no basis in science are applied to the accused like pricking to find insensitivities and finding scarring in the nether regions. The famous “dead-if-you-float, dead-if-you-sink” water test is contemplated in song. These events evoke the scapegoating of minorities in many historic tragedies perpetrated by sanctimonious but hypocritical and evil majorities in various populations – the Holocaust, the Inquisition, the Communist witch hunt by the U.S. Congress after World War II, and lynchings of African-Americans in the South come to mind. Note the predominance of purported Christian males behind each of these disgraceful movements.

The playwright populates the proceedings with colorful and distinctive characters, and Ariel Craft assembles and ably directs one of the finest groups of female actors in the Bay Area to noteworthy performances. Amanda Farbstein is Alice’s hysterical friend Susan with birthing troubles; Sam Jackson is the herbalist Ellen, whose magical potions draw their own unwanted attention; Sharon Shao is Betty who suffers the consequences of refusing to marry; and Melanie DuPuy and Sarah Mitchell play the foul inquisitors, intent on uncovering witches.

Churchill integrates disparities into her narratives in highly innovative ways – sometimes dictating very particular requirements, but conversely granting free reign elsewise. In other plays she depicts characters from different eras coexisting at one time (Top Girls); presents separate eras with the same characters in an illogical time warp (Cloud 9); and prescribes casting actors with demographics inconsistent with their characters (also Cloud 9) or assigns no names or demographic role characteristics at all (she leaves it to each director to self-define over 50 characters in Love and Information).

In Vinegar Tom, she marries the central plot with songs presented in contemporary time concerning feminist issues – not subtle, but showing how the marginalization of women persists. She insists that the 17th century characters must switch into modern dress, and costume designer Brooke Jennings has chosen the contrast of bright, seedy, strumpets’ apparel. What’s more, Churchill insists that her lyrics remain unchanged but allows any musical score to accompany the words, with the result that different productions will have very different feels depending on the style of music. The themes of the songs add heft to the intellectual canvas. Sexuality of older women that society wants to deny and criticism of doctors for guessing diagnoses of women’s diseases are among the topics.

This production uses Diana Lawrence’s composition which has influences of piano rag, music hall, blues, and more. At first, the songs seem like incongruous intrusions, but in time they are anticipated with appreciation. Some of the performers really demonstrate their versatility with powerful singing, especially Mitchell, Farbstein, and Shao. Though the music generally works well, one knock is that an opening musical phrase that is repeated in multiple songs seems that it will break into the song “New York, New York.”

Production values excel. The story plays on Nina Ball’s timeless but primitive lumberyard set, with stairs, ladders, and catwalks of unfinished mill wood. The staging works to provide a loft for the band and also to facilitate movement by characters and to enlarge the visual panorama by lifting the observers’ eyes off the small stage floor. Ray Oppenheimer’s stylistic lighting mimics Churchill’s playful mixing of contrasting themes. Finally, a shout out goes to dialect coach Nancy Carlin for training the actors with a consistent and clear accent and to the actors for delivering the goods.

Despite some elements that don’t hold as well as one would like, this play offers worthy ideas, and the production exceeds expectations.

Courtesy of For All Events