World Premiere in Chicago at Steppenwolf 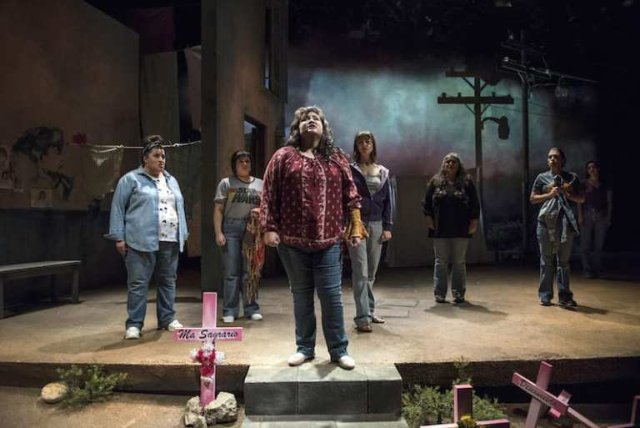 Pink crosses spread across the front of the stage. Many of them are marked “Desconocida” (unknown). Unmarked graves of young women who wanted to better their lives by working in the new maquiladoras on the Mexico/U.S. border.

Steppenwolf Theatre is staging La Ruta, an important world premiere play by Isaac Gomez, based on his own research on the women of Cuidad Juarez, played by an eight-member all-female Latinx cast. Sandra Marquez’ careful direction recreates the work and home lives of these women—and the dangers they live with—in a powerful, emotional way.

La ruta is the bus route that many women take in the dark after working 12-hour days at the factory. It’s the story of mothers and daughters–women who were kidnapped and murdered or used in sex trafficking. The play is set in the years 1998-2000; the femicides continue and hundreds of women disappear each year.

Two mothers—Marisela (Charin Alvarez) and Yolanda (Sandra Delgado)—are the heart of the story as they mourn their losses and yet hope their daughters will return. As the play begins in 1998, Mari’s daughter Rubi has been gone for two years. Late in the play, Mari is in the street, protesting police and government failures. She wears a dress of handmade posters about Rubi’s death.

Yoli’s daughter Brenda (Cher Álvarez) is a bright, lively 16-year-old who has just begun work at the maquila. She’s befriended by Ivonne (Karen Rodriguez), a worldly young woman who teaches makeup and other skills to Brenda. In the scenes in the year 2000 (projected captions date each scene), Brenda has disappeared and Yoli looks and waits for her frantically. Ivonne, who played a role in Brenda’s disappearance, has her own complex set of guilty feelings because her sister was taken too.

Scenes in the factory show the female workers pantomiming the operation of their machines and their casual conversations and arguments during breaks.

Marquez’ cast assures La Ruta’s dramatic power. Charin Alvarez and Sandra Delgado will break your heart as the mothers. Cher Álvarez is a sweet and winning 16-year-old. Karen Rodriguez succeeds as a young woman who has already been through too much for her years. Mari Marroquin has a few strong scenes as Zaide, a coworker at the maquila.

Music is a key component of La Ruta. Desamaya (Laura Crotte), a singer/guitarist, is part of almost every scene, softly playing and singing or accompanying the other performers in a song. The tracks are all public domain works, such as “Cielito Lindo” (Lovely Sweet One), a Mexican staple from 1882, and “Son Del Obrero” (Worker’s Song) from 1975. “La Bruja” (The Witch) is a traditional song that warns children to behave or the witch will take them and suck out their souls. Zacbe Pichardo is music director and Mikhail Fiksel is sound designer.

Projection design by Rosean Davonte Johnson highights Regina Garcia’s scenic design. The projections include images of actual Missing Girls of Juarez; their photos are mounted on walls. Lighting design is by Jesse Klug.

Playwright Gomez is a native of the El Paso/Cuidad Juarez area, the setting for the play and the location of the Desaparecidas or Missing Girls crimes. In his essay in the playbill, Gomez tells how he wasn’t aware of the incidents until he was in college and then became obsessed with the crimes. He interviewed women whose lives were affected, bus drivers who saw women taken, and a newspaper editor who reported on the missing and murdered women. The women in La Ruta are based on his research. (One segment of the recent Goodman Theatre play, 2666, adapted from the Roberto Bolaño novel, is based on the feminicidios or femicides. It’s set in a police station and makes clear how much police incompetence and corruption contribute to the crisis.)

Police corruption is one element of the continuing femicides. The machismo Mexican culture, and its sexual assaults and violence against women, is another. But an important root cause is economic: The development of the maquiladoras or twin plants that developed on the Mexico/U.S. border as a result of NAFTA. The 1994 trade agreement made it possible for companies to build factories on the side of the border, hire low-wage Mexican labor, export raw materials to without duties, and import finished goods to the without tariffs. The maquilas drew young women from nearby villages and from as far away as to work in the factories. And they are perishing, on their way to and from work.