The Christians at Mark Taper Forum

To Hell in a Handbasket 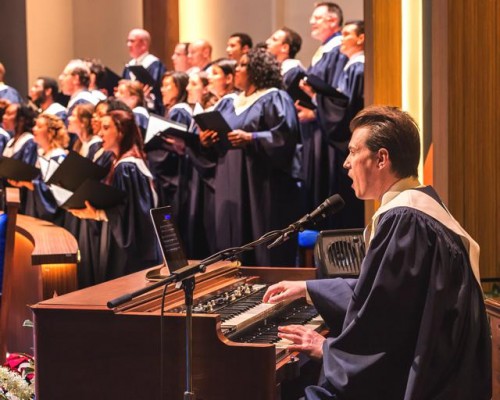 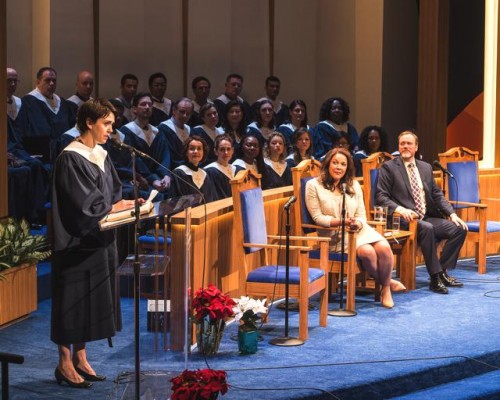 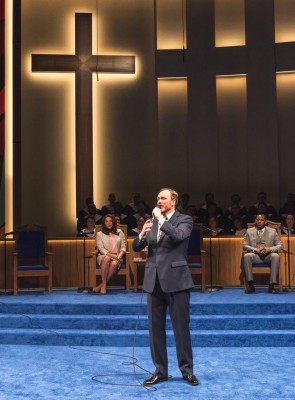 As the old saying goes, two subjects considered to be off-limits for discussion by polite people and friends at social gatherings or at dinner parties, are the prickly subjects of religion and politics.

But what if the highly-charged subject of religious beliefs and tenets is introduced by none other than the founding pastor of a highly visible mega-church during Sunday services, who claims to have experienced a religious epiphany when it comes to certain passages in Biblical scripture?

If that’s the case, then you must have been sitting in the audience watching a performance of the Mark Taper Forum’s (MTF) provocative, new, religious shout-out play “The Christians”, smartly written by Lucas Hnath and deftly staged by award-wining director Les Waters. Waters also staged two earlier productions for Center Theatre Group. “Marjorie Prime” at the (MTF) in 2014 and “Girlfriend” at the Kirk Douglas Theatre in July of this year.

“The Christians” revolve around a charismatic and highly successful Pastor Paul (an absolutely mesmerizing Andrew Garman) of a Christian congregation who suddenly announces during his Sunday homily that he has had a change of heart concerning the Bible’s representation of the place known as “Hell”. In fact, he claims there is no such place.

This stunning declaration throws the church and its followers into a tizzy. Sides are taken. Should the church elders, led by Elder Jay (Philip Kerr) ask Pastor Paul to leave? What for instance, is the position of the associate pastor Joshua (sensitively and intelligently played by Larry Powell)? Joshua sadly disagrees with Pastor Paul’s position. Even Pastor Paul’s loyal wife Elizabeth (nicely underplayed by Linda Powell) waivers on which side of this explosive and dividing religious issue she will come down on. Will she support her husband’s new position? Or will she stand with the majority of the congregants? Everyone is faced with being on the horns of a dilemma. Hobson’s choices are rampant in the church.

Choir congregant Jenny (earnestly played by Emily Donahoe) is a young divorced mother who is searching for guidance and answers from Pastor Paul on how to explain to her young son all this turmoil voiced by the congregation. Her character acts as sort of a Greek chorus where every question that Jenny asks, is followed by a response from Paul, which then leads to new and more probing questions from Jenny. When Paul realizes he cannot give her definitive answers to her questions anymore, their discussion may be over but the basic core issue still remains unresolved. At this point Jenny silently leaves the stage, signaling the exit of congregants leaving Pastor Paul’s church to Join Pastor Joshua in his new church.

The play as written by Hnath is a serious investigation into the nature of faith. It’s also clever in how it challenges some Protestant core beliefs in the Bible without offending too many believers. Any kind of change is always troubling even disturbing when deviations occur that threaten the status quo. Just ask Martin Luther and Pope Leo X about change and its after-shocks. Their little ecclesiastical ‘dust-up’ produced the Protestant Reformation in 1517.

The staging of the play itself, by Waters, becomes a ‘character’ in the production, thanks to Scenic Designer Dane Lafferty’s creation of an onstage church complete with choir singers drawn from local Los Angeles churches and choirs. They begin each performance with rousing gospel music conducted by Scott Anthony, which lends an air of authenticity to the story and the action that takes place on stage.

If one wants to know how convincing the setting is and the services being conducted in the faux on-stage church, at the point where Pastor Paul says to the congregants “Let us pray”, heads in the audience lowered as if to join in the prayers with the actors. Now that’s really being caught up in the moment with the onstage performers.

All of the verisimilitude of “The Christians” is accomplished without any of the actors raising their voices when stating their feelings or positions, except for a two minute scene between Pastor Paul and his wife Elizabeth near the end of the play. This is just good, old fashioned inspired direction on the part of director Waters who wonderfully orchestrates the all the voices and their pacing. The power of the play comes from the writing and the actors. It’s an interesting intellectual think piece that explores the complexities of religion, performed by a stellar cast of six actors and a choir of twenty on-stage singers that are drawn from a pool of forty-four who rotate their performances.

Playwright Hnath explains in program notes what he’s getting at in the play. “It’s true that there is no resolution in the play”, he says, adding “Here’s something I believe: a church is a place where people go to see something that is very difficult to see.” It’s a place where the invisible is – at least for a moment – made visible.” I would categorize that play synopsis in one word – Faith.

Hnath asks true believers to process this intellectual religious dichotomy of information without waiting for the ‘Godot moment’, so to speak, saying that this is why there is no resolution to his play. That may be the case but it sure is a provocative and entertaining journey while we’re observing everything from the audiences’ point of view.

This splendid production is performed without an intermission and runs at the Mark Taper Forum through January 10, 2016.