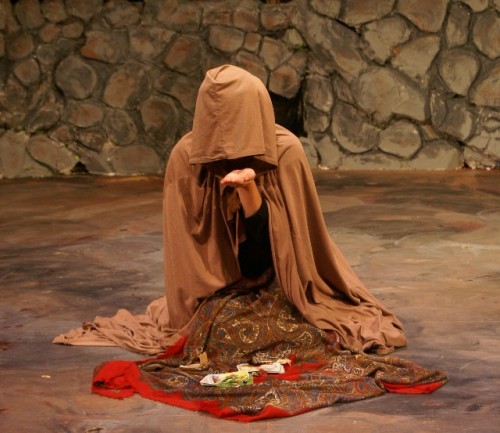 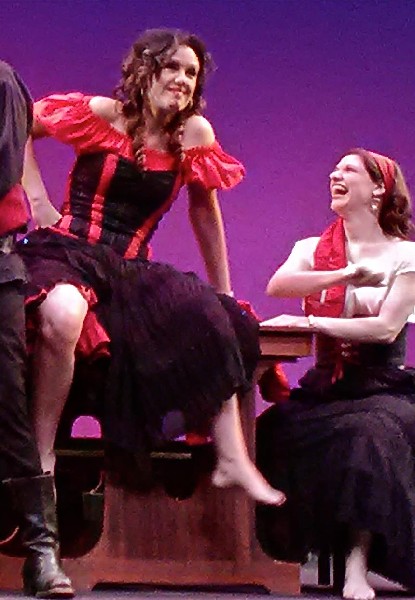 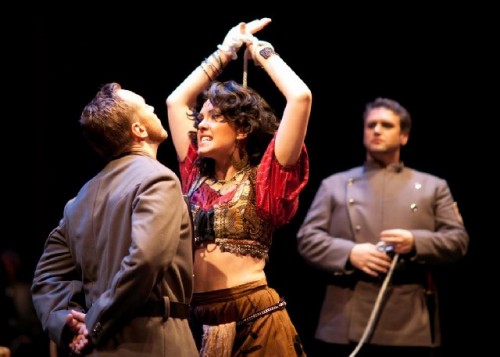 Hubbard Hall Opera Theater (HHOT) will present a travelling piano production of Bizet’s Carmen, Saturday, February 1 at 7:30 p.m. at the Dorset Playhouse, and Sunday, February 2 at 3pm at The University of Albany Performing Arts Center.

Thrilling but dangerous, the captivating Carmen is one of the most vivid characters in all of opera. Carmen tells the story of a beguiling gypsy who sets her sights on a naïve but passionate young corporal, tracing a tale of seduction, obsession, and deadly betrayal. HHOT will treat you to all of Carmen’s sizzling hits, including the famous “Habañera” and the irresistible Toreador’s song.  Coming in at 75 minutes this Carmen will be semi-staged and sung in French with supertitles, musically directed by Elizabeth Bonomo and directed by Jason Dolmetsch whom The Edge, Boston credits as either “The luckiest young director in the region or simply one of the most talented”.

Thomas: Can you speak about why HHOT is choosing to reprise this particular opera, having already done it once?

Jason:  Well, I haven’t had the chance to direct it yet!  Anyway, this Carmen is actually a different production than the Brooks’.  We stick very close to the original story line and are just trimming away some of the fat making a tight series of vignettes which actually gives it a great sort of modern day Criminal Minds appeal.

Thomas: Is there anything you want to share with us about the concept behind this particular production?

Jason: This is a story that crosses cultural boundaries.  It can apply to any exclusive group, and not just the disenfranchised ones. The gypsy could just as easily have been the escaped slave, the Cherokee scraping by in a government camp, or a fallen cheerleader (if we are thinking outside of the box).  But there has to be a reason to make these kinds of choices and basically what I have discovered in Carmen is that changing the time or place ultimately has little effect on the story line.  You are dealing with a woman who has spurned everyone to be her own person.  You may see her as confident or insecure; you may say she is digging her own grave or that she feels she has no choice.  In a show like this, my job is less about setting and all about character development, and that is what excites me.

Leading the cast is mezzo-soprano Kara Cornell, who hails from Feura Bush, NY and has performed Carmen around the country, including her debut of the role in Brooke’s version at Hubbard Hall in 2009.  Reviewers for that performance heaped praise on Cornell as an electric singing actress, comparing her to Denise Graves and ultimately helping to make the dark gypsy her signature role.

Thomas: How will this Carmen be different from other Carmens you have done?

Kara: Jason is really good at getting to the heart of a character and I’ve wanted to work with him for a while.  I'm hoping this version will bring out sides to Carmen that I have not yet discovered.

Thomas: Do you find this kind of production with piano and small cast to be more difficult to perform?

Kara: Yes.  When all of the chorus and smaller roles are eliminated, it leaves less of a break for the title character. I doubt I will have much time offstage.

Thomas: What is something you are most excited about in this process?

Kara: I'm actually most excited to show my local audience how I perform Carmen. Since I first did the role in "The Tragedy of Carmen" with HHOT in 2009, I've sung it a bunch of different cities, but not again around here.  I think some of my local audience is curious to see me in action and I would love their feedback.

Playing across from Cornell as Don José is tenor, Russell Andrade, a Dubai native currently residing in Georgia who has performed in opera houses across the world. Andrade's “big and brilliant voice is perfect for heroic roles” (Times Argus) and he is excited to debut his “liquid, clear-as-a-bell tenor quality” (Vermont Seven Days) as the love-sick soldier with HHOT.  Patrick McNally, who rocked the HHOT summer audiences with his explosive and devilish Figaro in Barber of Seville, will be applying his vibrant bass-baritone to Zuniga, the captain of the guards.  Charles Martin, who was last seen as Zarastro in HHOT’s Magic Flute, will be flexing his muscles here as the imposing bullfighter, Escamillo.  Alexis Rodda, a young artist with HHOT this past summer and a recipient of the Hand Motor, Vermont Country Store and Golub Foundation fellowship, will be debuting the role of Micaëla - the girl next door.  Rodda was the 2013 winner of the Metropolitan Opera National Council competition for the Boston District and her strong voice and earnest acting earned her a place as a New England finalist.

HHOT’s touring piano operas are an annual outreach event, showcasing different young performers each season and building excitement for what the rest of the season has in store including the summer orchestra productions of Marriage of Figaro and Gianni Schicchi.   Founded in 2008 by Artistic Director Alexina Jones, HHOT has consistently presented critically acclaimed shows including the 2013 production of La Traviata at Proctors Theater which was awarded the prestigious American Prize for conducting and the 2012 production of Magic Flute which was hailed by the New York Times as "…the best by far. It was an exhilarating event. You couldn't monetize it; you couldn't commodify it ... you could only experience it." For Carmen, Alex Brooks of the Eastwick Press says it best:

This production is by no means lesser than larger productions of the traditional version, because of an extraordinary performance by Kara Cornell as Carmen. She is by turns imperious, sultry, passionate, and devious - everything that a great Carmen should be…so by all means at some point in your life catch a production of the traditional Carmen with all the bells and whistles. But when you do, you will not get the experience offered at this Hubbard Hall opera - of experiencing in an intimate setting a first rate portrayal of Carmen by a performer of Cornell’s immense talent.

On Thursday, January 30, HHOT will open the Hubbard Hall mainstage doors for a “pay what you will” viewing of our final dress rehearsal.

Dorset Playhouse: $40 general admission including a wine and tapas reception

Building off of the rich tradition of arts in the Cambridge Valley, Hubbard Hall Opera Theater seeks to bring yet another element of culture to an already bustling center.  HHOT strives to give young artists opportunities to perform key operatic roles in a nurturing environment alongside seasoned professionals through mainstage productions, the conservatory student training program and outreach performances.  HHOT also engages and builds rural audiences for opera through offering affordable, intimate high-quality musical and theatrical performances.