Preservationists Save Unique 1952 House From Demolition 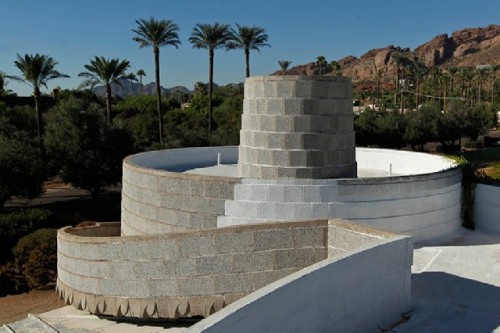 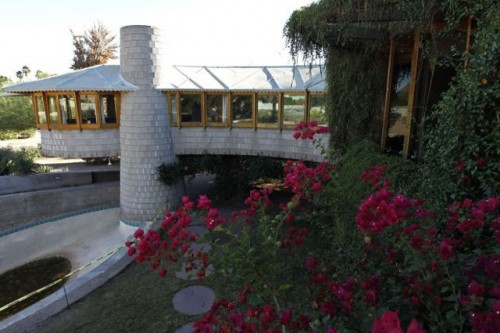 Side View of David Wright House 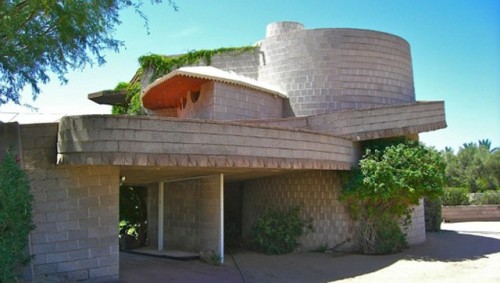 View from Below of David Wright House Another View of the Curved Form of the David Wright House. This design was priopr to the Guggenheim Museum’s design. 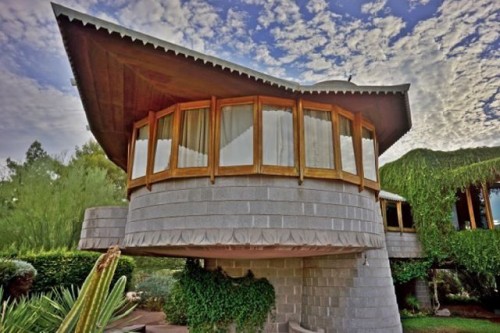 An Earlier Image of the Front of the David Wright House in Phoenix, Arizona. 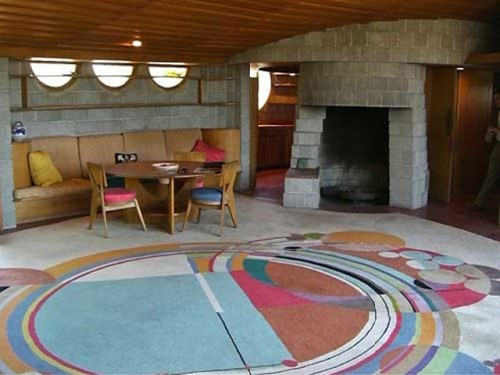 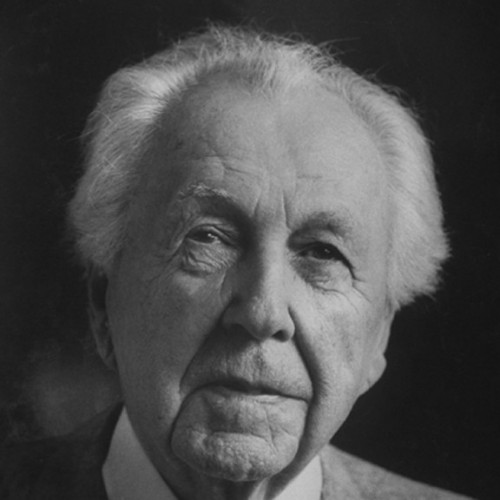 Frank Lloyd Wright in Later Years Around the Time He Created the David Wright House for His Son.

We can hear the echoes of rousing hosannas from the architectural preservation community all over. Instead of a time of sorrow and lamentations, this has become a time of triumph and celebrations. In a way, it is a Christmas architectural miracle!

At the end of the Mayan Apocalypse Calendar, preservationists saved a Frank Lloyd Wright house in Phoenix that was designed and built for the architect's son David and daughter-in-law Gladys.

Designed in 1950 and completed in 1952 for his fourth son from his first marriage, the house was intended as a desert dwelling. The 2,250-square-foot concrete and steel structure is strategically lifted off of the desert floor in a spiraling design. It has a rampway to provide access. Wright's design engineering allowed for systems placement and concealment as well as to catch a gentle desert breeze.

Gracefully curling on itself, a reinforced concrete floor cantilevers the living space. The elegant interiors are made from Philippine mahogany. Built at an elevation that provides panoramic views of Camelback Mountain, it was intentionally sited at a height above the surrounding citrus orchards. Unfortunately, these are all but gone due to build-out of other residences.

David Wright was involved with the design, manufacture and marketing of concrete block. So his father's original design was modified to accommodate the concrete construction. A custom concrete block frieze elegantly adorns this structural gem.

The David Wright Residence was the last Frank Lloyd Wright designed home continually used by his family in Arizona. Yet, this structurally unique residential architectural treasure by the American master was freightenly nearly scheduled for certain demolition.

The fear was that another Wright building would be razed. Incredible as it might seem, about 100 of Wright's buildings, about one of every four he built, have been demolished. Houses, apartment buildings and recreation and business structures all were lost to real estate pressures, changing tastes and/or just sheer neglect.

ed the house was left, no longer pristine, to less-than-interested granddaughters.

Some of Wright's most monumental achievements are no longer around. These include Tokyo's Imperial Hotel (demolished in 1968), Chicago's Midway Gardens (razed in 1929) and Buffalo's Larkin Administration Building (destroyed in 1950). Large numbers of formative, early designs by the young Frank including a boathouse, a golf club and a courtyard apartment building have also been destroyed.

The spiral David Wright house was under severe threat of demolition to allow developers to sub-divide the plot and build two or more new houses. This caused architecture buffs, critics and preservationists to panicky question how such a house could be at such extreme risk.

The story follows that David and Galdys Wright didn't want their home in a residential neighborhood to become a museum. I guess this is a bit of reverse snobbery from the children of FLW and the longtime residents of one his notable houses.

The house was left, no longer pristine, to less-than-interested granddaughters. So,when they died they sold it. They, in turn, subsequently sold it to a buyer who promised to fix it up and live in it. The buyer did neither. Then the house went back on the market. At that point, it was noticed by developers who bought and owned it until December 20, 2012. And because it had been uninhabited for four years, it wasn't on any preservation watch list. So, the developers could do anything that they wanted. And they almost did.

As time marched on, panic and feelings of inevitable failure set in for architectural preservationists when the City of Phoenix did not quickly designate the building and site as an architecturally significant structure, and two previous attempts to purchase it from the developers failed to result in a sale. The dissipating situation looked like the David Wright Home would be torn down, and two McMansions would be built there instead.

The Chicago-based Frank Lloyd Wright Conservancy was finally able to find a preservation benefactor, an LLC owned by an anonymous benefactor, that will transfer the structure to a not-for-profit entity to supervise the restoration and maintenance of the house. It is estimated that the cost of the property of the two bedroom structure was around $2.3 million.

The previous potential buyer of the historic home backed out for unknown reasons in late November. The clock was ticking. So yesterday's sale came not a moment too soon. The new owner will be requesting the City of Phoenix to grant landmark designation to the house. After restoration, the structure will be made available for tours and educational purposes.

Uniquely, this house is the only residence by the world-famous architect that utilizes a circular spiral plan similar to New York's Guggenheim Museum. The iconic museum started construction six years later than the residence. Many architectural historians and critics consider the David Wright House to be one of ghe architect's most significant buildings. Saving it is a wonderful accomplishment.

We survived the Mayan Apocalypse. The David Wright House survived its own in Phoenix as well. It was the Wright thing to do.