The Plot at Yale Rep 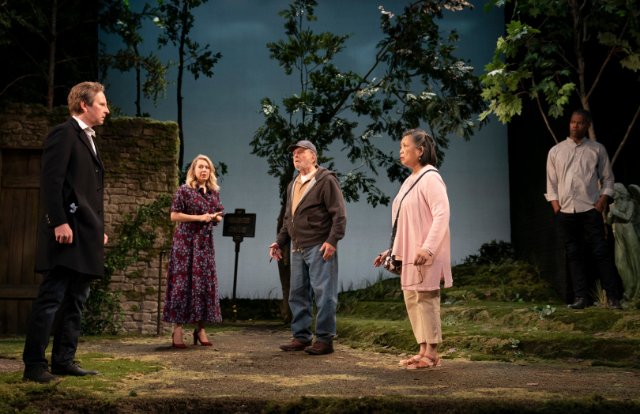 Playwright Will Eno has a unique way of blending reality, perception and expectations. This talent is on display at the Yale Rep in the world premiere production of The Plot through Saturday, Dec. 22.

Audiences may recall his last world premiere at Yale – The Realistic Joneses—went on to win the Drama Desk Award for best play and was named the best play on Broadway by USA Today. Another Eno play, The Underlying Chris,  just opened in New York to excellent reviews.

As with most world premieres, The Plot needs work; too many threads are left dangling and too many questions unanswered.

What’s good about the work is that you want those answers.

The play opens with Joanne, an older woman played beautifully by Mia Katigbak, entering the stage and telling us she is looking for her husband Righty. He’s wandered off again, and she is visiting his favorite spots, one of which is this dilapidated graveyard. He has Alzheimer’s.

Righty is there, checking out the cemetery plot that he has recently bought without Joanne’s knowledge. In fact, they already have a deposit on two plots in another cemetery. After they go home, the characters change to Donna, the efficient personal assistant to Tim, whose profession is somewhat unclear. Is he a developer, a contractor, a speculator or just a sleeze? He’s got an option to buy the graveyard so that some sort of transfer station can be built. Tim expects to make a lot of money on  the deal but he also borrowed a lot to make it happened. Plus there is Grey, a landscape architect and landscaper whose purpose in the play seems muddied at best.

It appears that Donna has gotten the next of kin of those long buried souls to agree – for cash – to have the bodies moved. But now there is Righty and Joanne. Neither are as unsophisticated as Donna and Tim might think.

As the machinations to get Righty and Joanne to agree to sell this plot progresses, our perspectives on them and reality switches. What does happen is that we begin to question everything we think we know about the characters. Perhaps even their own perspectives of themselves change.

Who really are Righty and Joanne – the low income older couple or other people? Does Righty have Alzheimer’s? Is this all a scam to fleece Tim? If so, is Grey in on it?

That we are left with so many questions may irritate some theater goers but others will find they return to the questions and possible answers multiple times, playing over the possibilities in their heads.

Oliver Butler has directed this one act show with skill. He is blessed with a set by Sarah Karl that perfectly captures the old, almost abandoned graveyard with decaying stone markers and a gazebo that is falling down.

But it is the cast that helps bring the play to life. Mia Katigbak has a quiet dignity as Joanne, Righty’s wife; she seems worn and plain spoken. Jennifer Mudge is fine as Donna, the efficient assistant who can’t break away from her boss, no matter what he does or how he disappoints her. (They are having an affair and he tells her that his wife and he are getting back together). Stephen Barker Turner as Tim is an enigma; is he the successful wheeler-dealer? A wannabe? Or an inept con artist? Grey is the least developed role; he seems like a passive observer most of the time which gives Jimonn Cole very little to work with.

At the hub of the play is Righty, played brilliantly by Harris Yulin. It was great to see him back on the Yale Rep stage; I can remember his outstanding performances many years ago. In this performance he shows what a consummate theater actor can do with a role. He adds dimension to Righty.

The more I consider the play, the more ideas I have about what it is all about. To me, that is often the mark of a fine work of theater.

I’m looking forward to seeing the next iteration of The Plot as Eno continues to develop and refine this work.