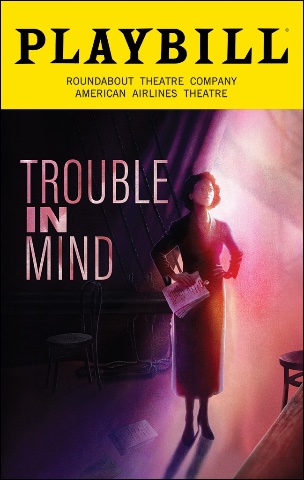 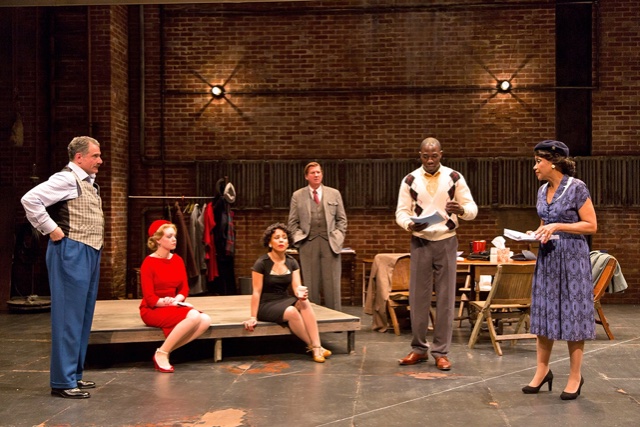 Difficult. rehearsals for a difficult play within a play. Trouble in Mind by Alice Childress

Roundabout Theater is mounting Alice Childress’ play, Trouble in Mind. It premiered off Broadway in 1957 to excellent reviews. Transfer to Broadway failed when the producers demanded changes the playwright refused to make. Now we get a look.

“No” has probably welled up in every African American Actor who is asked to play a Mammy and other offending roles.

Hattie McDaniel is the most famous of them all. She was the first Black person to win an Oscar for her depiction of Mammy in Gone with the Wind. She remarked, "I can make $7 a week as a maid and $700 a week playing one."

McDaniel sat near the stage at the Oscar ceremony, but she was way wide and separated from everyone else. She thought the Oscar would make her life easier. It didn’t. Ruby Dee and Cicely Tyson would rise up and refuse the offending roles.

In Childress’ play, the play-within-the-play is never performed. Bits are read. Yet Wiletta’s role becomes clear. She is having the classic struggle to say No to a part she finds offensive, rocking the baby to the tune of Yessa, Yess’m. Wondering why a mother would allow her son to go out and be lynched.

Set in the worn and un-glamorous reality of a rehearsal studio, we watch the rehearsal of a play with a cast of actors of different races. The drama is about lynching, with a white director (Michael Zegen) who wants to tell audiences that these murders are bad. Perhaps more that needs to be said.

LaChanze as Wiletta Mayor bubbles though this work like a seething volcano. Her voice, both as a singer and as a dramatic actor, is riveting. The piece is enhanced by original music by Nona Hendryx and sound design by Dan Moses Schreier. Costume design (Emiio Sosa) and Hair and Wig (Cookie Jordon) highlight 1950s fashion.

The play is set in 1955, placed strategically between the anti-communist hysteria of the HUAC Hollywood investigations and the outcry of a new generation demanding voting rights and an end to segregation. Is the play they are rehearsing a reflection of the stereotypes of the past, or a true call for social equality? Childress has prophetically asked questions which resonate today.

Chuck Cooper, as Sheldon Forrester the senior member of the cast, brings a deep pathos and ironic humor to the journey that bridges old ways and the new. As the play-within-the-play’s director, Al Manners (Micheal Zegen) tries to justify both his authority and his credentials as a un-biased and forward thinking professional. Dramatic tension grows. His play, he believes addresses prejudices and negative racial representations.

Yet would a woman placidly sing spirituals as she ironed while a posse prowled the streets to lynch her son for voting? Would she turn him over to the authorities? Would he beg for his own imprisonment?

Judy Sears (Danielle Campbell) and John Nevins (Brandon Micheal Hall) reflect the younger generation, both white and Black. They are poised to shed the past. But stereotypes and pigeonholed image intrude their present. Bill O'Wray (Don Stephenson), the bad guy of the play-within-the-play, stumbles repeatedly into misogyny, and self-segregating superiority. He is unaware that he is part of the very problem the play is purportedly addressing.

Millie Davis (Jessica Frances Dukes) offers the 'looking out for number one' option for success, with a delightful sense of both its truth and its constraints. Eddie Fenton (Alex Mickiewicz) is the assistant who scrambles to make it all OK. Henry (Simon Jones), an old Irishman, lends a supportive voice to Wiletta's struggle for dignity and independence. “We are a nation of fighters,” he tells her. In her own way, she too has become part of that nation.

People of the theater world are less prejudiced and more concerned with merit than their fellow citizens outside. Members of the play-within-the-play production reflect this. Outside citizens of course encompass producers and the governors of product. Getting an insider’s view of both worlds helps us better understand the difficult path to acceptance and integration. Trouble in Mind provides an opportunity for insight stimulated by terrific performances across the boards.

It ends on a high note: Wiletta delivers Psalm 133.  Behold, how good and how pleasant it is for brethren to dwell together in unity!