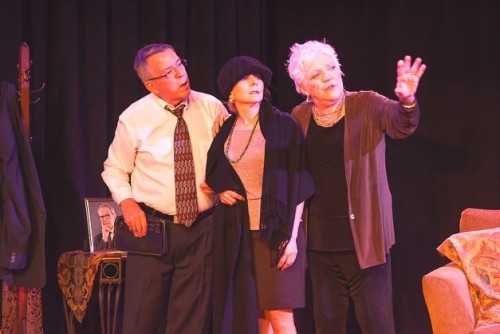 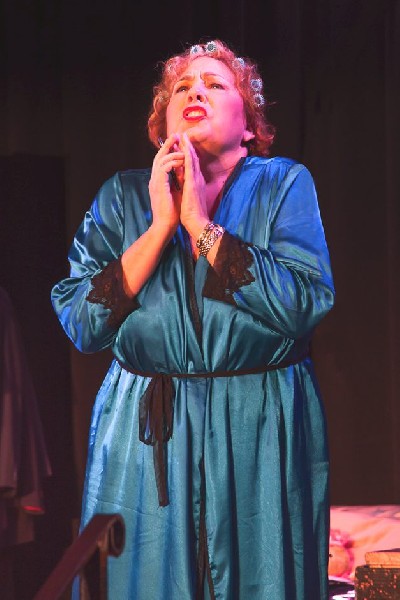 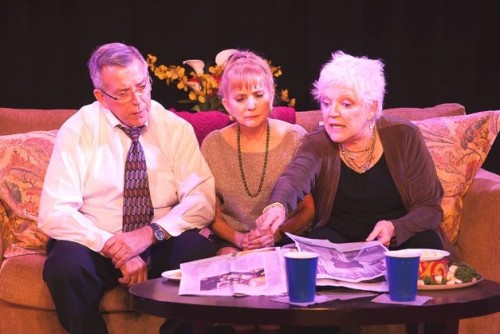 Everyone loves a winner.  Everyone loves to laugh.   Well, if that’s the case, then everyone had better scoot over to the Palm Springs Woman’s Club at 314 S. Cahuilla Road on the corner of Baristo and Cahuilla.   Why?  Because the Dezart Performs acting company, now in its fourth season, is presenting an hilarious and highly entertaining program of three One-Act plays called “The Mating Games”.

Dezart Performs’ Play Reading Series is an annual event held every spring in Palm Springs and receives playwright entries from all over the country.  This year the organization received 121 submissions.  The three One-Acts in this year’s festival are: “Feeding Time at the Human House”, written by David Wiener and directed by Lenny Ripps.  “The Blind Date”, written by Tanis Galik and directed by Don Cilluffo, and “Mourning Glory” written by Rich Orloff and directed by Dezart’s artistic director, Michael Shaw.

The festival selections on stage this year come from the ballots and scores judged by the audience members in April of 2012.  All play scores were recorded and calculated, and the plays with the highest scores were declared the Audience Favorites – the plays now onstage at The Palm Springs Woman’s Club.  “The Mating Games”, cleverly and comically address the eternal vagaries of life concerning the topic of love, dating, and the longing for companionship.

In “Feeding Time”, set in a zoo in a large city, the zoo’s two Orangutans, Fran (a delightful Sherry Lubov Ripps), and her mate Bernie (a burly and huggable Paul Buxton), share Orangutan opinions and philosophy about the humans that stare back at them in their enclosure.  If you have ever been to a zoo and stared into the Monkey and Gorilla enclosures, then you are well aware of their proclivities when it comes to their personal hygiene… if you get my drift.  It’s a hoot of a One Act.

“The Blind Date” can be a youthful horror story revisited, depending on one’s own experience, or at best, a cautionary tale about dating for seniors in the here and now.  Ron Young as Stanley, a sixty-year old bachelor, has a blind date arranged by friends with Alice, played by Kitty Garascia.  It isn’t easy for seniors, who once more find themselves trying to cope with the thrill or pain of testing the dating waters, especially when they’re well past their primes.

Do you remember the old, shaggy-dog story of the salesman who’s car breaks down on a lonely road at night and is in desperate need of a jack-handle in order to change the blown tire?  If you do, then this hilarious One-Act is for you.

In “Mourning Glory”, the final selection of the evening, it seems that sex rears its head at the most unlikely of times.  Hey, it’s a primal human emotion, and it’s hard to control one’s feelings.  Well, that’s the rationale, at least for widower Milt (an ever-so-proper appearing Hal O’Connell) and his dead business partner’s wife Aggie, a new widow (deliciously played by Valorie Armstrong).

Armstrong’s droll, at times, double entendre’s finally push Milt over the edge of propriety, and both share their marriage secrets about their spouses of forty-seven years.

O’Connell is the perfect foil for Armstrong’s exquisite comedy timing and delivery.  Everything, it seems is on-track for a little late night heavy breathing, until Aggie’s niece Beverly (Dolly Dupree), appears from another room to console her favorite Aunt following the funeral services. Armstrong and O’Connell’s onstage chemistry is spot-on and the controlled mayhem of the moment is beautifully choreographed and executed by director Shaw.