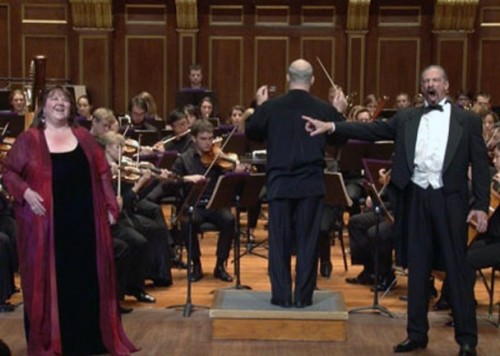 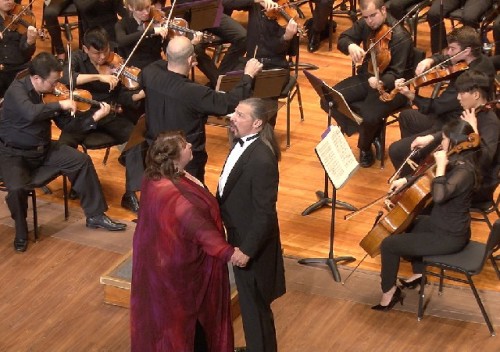 What a way to throw a gala to raise money for a new dormitory! From the first note to the last, the New England Conservatory student orchestra and vocal soloists, led by distinguished conductor Robert Spano and headlined by opera stars Jane Eaglen and Greer Grimsley, put on a thrilling performance. And this from a Wagner skeptic who is particularly unconvinced by his 16-hour epic “Der Ring des Nibelungen,” known familiarly to English speakers as “The Ring,” which I find objectionable for just about every reason you can think of - except, perhaps, musically. I’m sure I was not the only member of the audience at Jordan Hall, however, who sat for an hour and a quarter in rapt attention to the seamless wedding of music, text and drama, all executed with equal measure of precision and passion.

Of course, “Die Walküre” is the least problematic of the three dramas and prologue that comprise the Ring, and Act III is probably the single act in the entire four-night ordeal easiest to excerpt, which explains why it is frequently performed in concert form. That it concludes with a scene of touching almost-human intimacy between the angry Teutonic god Wotan and his favorite daughter, the Valkyrie Brünnhilde, whom he must punish for her disobedience by stripping her of her divine status, goes a long way to making it accessible to mere mortals. (The Valkyries are daughters of Wotan who bring the dead bodies of fallen heros to Valhalla, the Teuton heaven.)

Before we get to the particulars of the performance, a few words about the evening’s purpose. The benefit was not just for a new dormitory. In case you haven’t been paying attention, the Boston area is going through an economic boom of a scale not seen locally since before the First World War. It is fueled by research in medicine and technology, but it is backed by the region’s deep field of educational and cultural institutions. Not just Harvard and MIT, but all the other schools that want to survive in the current climate of grow or die are in a race to produce the biggest and best facilities possible in order to attract the best international talent.

That competition includes the music and art schools. In just a few blocks bounded by Mass Ave, Boylston Street and Huntington Avenue are three of the leading music conservatories and colleges in the country: the Boston Conservatory, the oldest independent music school in America; Berklee College of Music, the leading jazz school in the world; and the New England Conservatory, long one of the most prestigious conservatories in the country. All are in expansive mode, turning those few blocks, which also include Symphony Hall and Jordan Hall, into a music campus arguably unequalled in the United States. And if you factor in the two art schools a few blocks down the street, not to mention the Museum of Fine Arts and the Gardner Museum, you can understand why former mayor Tom Menino renamed that stretch of Huntington Avenue the Avenue of the Arts.

The NEC’s new awkwardly named Student Life and Performance Center – isn’t it just begging for a donor to put his name on it? – will house a library, a dining commons and a rehearsal and performing complex complete with recording studio in addition to dormitory space. Designed by the local firm, Ann Beha Architects, it will fill an empty space, currently used for parking, on St. Botolph Street just West of Mass Ave.

The New England Conservatory has always had a strong faculty, but in this race to be the best, it has beefed up the roster of teaching artists on its staff. One of its starriest recent hires was Jane Eaglen, one of the few Wagnerian sopranos who can also persuasively sing Bellini. One of the outstanding Brünnhildes of her generation, Eaglen was the impetus of the fund-raising gala, casually suggesting it to NEC president Tony Woodcock, who came back to her almost immediately with a date.

In short order, the team responsible for a reportedly memorable 2005 Ring in Seattle reassembled. Bass-baritone Greer Grimsley, who starred at the Metropolitan Opera as Wotan in the controversial Robert Lepage 2013 production, has connections to the conservatory. His wife Luretta Bybee is on the faculty and he has given master classes at the school. Conductor Robert Spano, music director of the Atlanta Symphony Orchestra, was the Boston Symphony Orchestra’s associate conductor for a number of years. All three artists donated their time for the gala.

Other than those three, however, everyone else on stage – a huge mob of young instrumentalists and vocalists that required the stage to be extended – were students. The wonderful sound they made speaks well of the training they are receiving as well as of their own innate talents.

The thrills began with the first blasts of “Ride of the Valkyries,” one of the most familiar orchestral passages in the entire operatic literature. Following Spano’s lead, the student orchestra played loudly but with crispness and precision, and the horns, which would be put to heavy use, played with brilliance. The excitement was brought to an even higher level with the entry of the eight Valkyries, singing their battle song like banshees, punctuating their “ho-jo-to-ho’ s with weird unearthly laughter. (BTW, their cry has nothing to do with Howard Johnson’s, the late turnpike restaurant chain.) The sound the eight student Valkyries made was extraordinary. With only a couple of exceptions they seemed ready to reprise their roles on the stages of major opera companies. Among them, soprano Nataly Wickham as Helmwige deserves a special shout-out: her voice was powerful but fluid and even sweet, hallmarks of a future Brünnhilde. Hers is a name to remember.

The entry of Brünnhilde and Sieglinde brought matters to a yet higher level. Sieglinde - one of the Wälsung twins, with her brother Siegmund, children conceived by Wotan like the Valkyries, by a woman other than his angry wife Fricka - was sung by soprano Kirsten Hart, an Eaglen student, with rapturous tone. (Warning: I will stop trying to give plot summaries here. The Ring cycle is ridiculous with plot complications, and if you want to know more, there are a thousand sources to access. Probably no opera has been so written about.)

As Wotan, Grimsley was in blistering form. Entering in formal attire, his gray hair tied back in a ponytail, he glowered from the start, his eyes narrowed to slits, his long nose suggesting a dangerous weapon. He thundered, he raged like the god of the Old Testament. He stalked the lip of the stage like a caged animal. Grimsley sang throughout with passionate intensity, his anger at his daughter’s disobedience never, however, making him a monochromatic performer. In his direct interaction with Brünnhilde he expressed tenderness and lyricism with the same passion. This is a guy – a god – who is always on, never indulging in down moments. Grimsley’s voice was nearly perfect for the role, attentive to the text, stentorian when necessary, but also sweetly lyrical when he is so moved. There is a reason he is the go-to bass-baritone if you’re mounting an important Ring cycle, as Seattle and the Met, as well as opera companies in Berlin, Cologne, Venice, Barcelona and Tokyo, have decided. That he appeared in Boston, a city without an opera house, is a blessing to those who attended.

The big question of the night was Eaglen. Sidelined by health problems in recent seasons, she had a big reputation to live up to. Possessed of a huge voice capable of blowing her colleagues off the stage, as she did the one time I heard her previously as Brünnhilde in San Francisco – I’m sure her entrance woke up more than a few San Francisco socialites who attend the opera out of obligation rather than love - she also had to demonstrate to her detractors that maturity had brought her a broader palette of tonal color and a greater dynamic range.

Not to worry. Eaglen’s time-out might have been good for her. She sang with the bright sound she is known for, and there was an admirable sheen to her voice. Her lower voice was a little ragged at times, but not enough to detract from a brilliant performance. Her extraordinary volume was in evidence, but she also showed that she was able to tone it down for relatively small-scaled Jordan Hall. (Which equally big-voiced Portuguese soprano Elisabeth Matos was not in a concert performance of Wagner’s early hit, “Rienzi,” presented last year by Odyssey Opera.)

She also demonstrated a wide dramatic range. She was commanding as the dominant Valkyrie, bringing Sieglinde, a living mortal, to their hallowed rock, but she reacted like a child being reprimanded when Wotan strips her of her divinity. She also demonstrated Brünnhilde’s desperation as she bargains with her father to insure that only a hero wakes her from her imposed sleep.

The audience included at least one opera company impresario. If she doesn’t engage Eaglen soon to sing with her company, she’s crazy.

Although it was not its purpose, the evening brought to the fore another issue: Boston’s lack of an opera house with the resources to put on large-scale 19th century operas by Wagner, Verdi, Puccini, Strauss and others. It’s a subject that has bedeviled the city for decades. It looked as if Sarah Caldwell had solved the problem with her purchase of the opulent RKO Keith Theatre, but with the dissolution of her company, that theater, still called the Opera House, is basically, with the exception of the Boston Ballet, a rental venue for touring musicals. The issue of building a new opera house has returned as Boston reclaims its position as a major cultural center. The new mayor has said that an opera house is on his agenda – how far down the list exactly remains to be seen. The danger is that a theater too big to be sustained gets built. What’s needed is a larger pit for a larger orchestra and a larger back stage for sets. What’s not needed is a theater with greater seating capacity. Cities that have them are finding them to be albatrosses. And that includes New York City, where the estimable New York City Opera went down in flames only a couple of years ago and the Met is having a hard time selling enough tickets to fill its cavernous space. It will be interesting to see how a new Boston opera house gets played out if it should ever come to pass.