At the Ahmanson Theatre 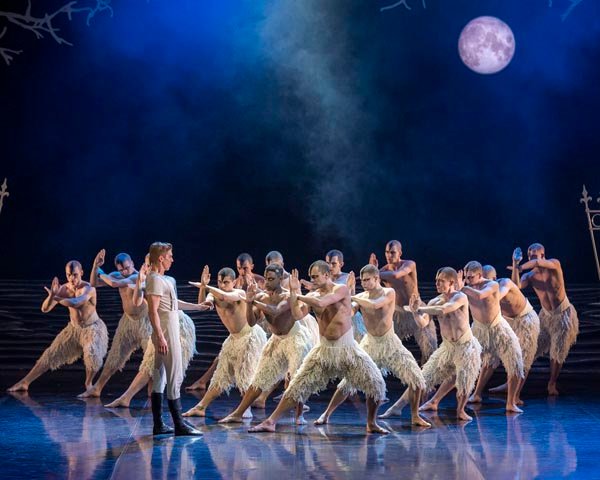 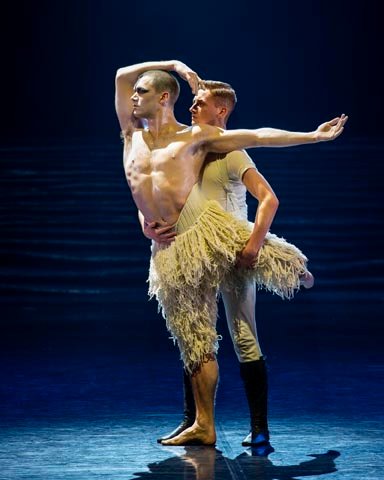 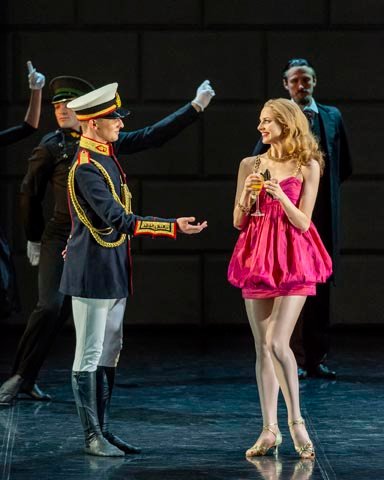 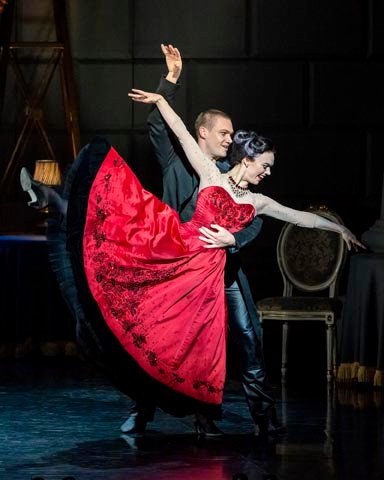 Opening nights in the theatre be they musicals, comedies, dramas, opera’s, or in this case, the world famous Tchaikovsky “Swan Lake” ballet, are always eagerly awaited.  On opening night the air in the Ahmanson auditorium fairly crackled with electricity in anticipation waiting for the curtain to rise.   When it did, a silence fell over the audience and the magic and thrall of the production swept through the audience of 2000 transfixed and rapt patrons.

Internationally acclaimed Director/Choreographer Matthew Bourne returned to Los Angeles on December 5th with a reinvigorated and a brilliantly reimagined production of his most celebrated work that originally burst onto London’s Saddler Well’s stage in 1995; taking the world of ballet by storm.

The iconic Tchaikovsky ballet production traditionally had been staged by female corps de ballet companies.  In Bourne’s audacious version of twenty-four years ago, his production featured an all-male company of dancers.   The production received raves from the London newspapers the next day causing a sensation within the world of ballet. And, as they say, the rest is history.

Bourne’s 2019 directorial vision, once again features an all-male company of dancers to perform Russian composer Pytor Ilyich Tchaikovsky’s fairytale story of a troubled Russian prince, who in Bourne’s version falls in love with a male Swan.  What the movie “The Red Shoes” did for ballet, Bourne’s “Swan Lake” production does for ballet-oriented stage productions.   It’s just flat-out sensational in its originality.

This was my second viewing of Bourne’s triumphant “Swan Lake” ballet. This 2019 version is like a breath of fresh air, and is just as engaging, and sublimely performed as when I first saw his production a decade or so ago. With no disrespect to the original version, I feel the 2019 production is more richly textured and more creatively executed by Bourne with his new company of young dancers. This new company is listed as a “New Adventures production”.  Fans no doubt will discuss, debate, and evaluate both past and present versions of Bourne’s “Swan Lake” production for years.

His genius lies in his boldness, audacity and a willingness to think outside the traditional ballet box.  Ballet, as an art form has been with us since its beginning in 15th century Italy.  It has served society well as an art form to be enjoyed and appreciated, thanks to the artistry and talent of the performers over the centuries.  During the 20th century, stars such as Rudolph Nureyev, and Mikhail Baryshnikov, had the talent and charisma to attract new audiences – both men and women – to the ballet art form.

His latest version now on stage of the Ahmanson Theatre, in downtown Los Angeles, boasts a company of 38 performers  – both men and women – who will rotate both principal, supporting and ensemble roles  throughout the limited run.

The principal cast I saw perform on opening night includes an absolutely spellbinding, gravity-defying, astonishing, performance by Will Bozier as the Swan and as the Stranger. Andrew Monaghan, as the Prince, who falls in love with a male swan in the dream sequences, is drawn toward this party-crashing Stranger dressed all in black amid the colorful Royal Ball sequence in Act Two, where all are all dressed to the nines with Tiara’s, jewels, and gowns that fairly sparkle courtesy of Set and Costume designer Lez Brotherstone.

The Queen, the prince’s beautiful mother, regally and flirtatiously played by Nicole Kabera thrives on all the attention being paid to her much to the displeasure of her son the Prince.  It’s an open question that is still being debated in ballet circles as to whether the Prince has an unhealthy attraction toward his mother, or that he’s just peeved and jealous of her popularity. The role of the Queen’s private secretary is smartly played by Jack Jones, who keeps all the protocols of the Royal household in working order. Alas, every household can’t be as fortunate.

Enough, however, cannot be said in praising this ensemble.  These young, gifted, energetic and dedicated dancers are the backbone that this production also relies on.  Dance companies worldwide depend on similar “rocks” upon which productions either succeed or fail.  Without them “ballet” would be just a series of dance recitals performed by two, perhaps, three glittering world class artists in solo or in pas de deux performances.

The beautifully performed breathtaking sequences involving the ‘company of swans’ are almost Mozartian in their precision, graceful movements, and stamina; especially in the centerpiece sequence that takes place at the Lake.  It involves the lead swan (Will Bozier), the Prince, the cygnets, the medium swans and the big swans that ends in the total capitulation of the Prince to the lead swan.  One could hear a pin drop in the emotionally drained audience at that point.

It’s great stuff.  And that’s just Act One.  But no more spoiler alerts from me.  One will just have to see this magnificent production for oneself.  The final curtain call received a richly deserved three minute sustained, standing ovation and applause (I checked my watch).

However, I wouldn’t wait too long to purchase tickets.  Once word of mouth gets around, “Swan Lake” will become a very hot ticket event to see in Los Angeles.  If this superb production catches on with regular legitimate theatre audiences, there’s no telling where the future of ballet and/or dance productions, in general, will lead.  Game-changing “Hamilton” debut only four years ago.  Now gifted young theatre and ballet professionals, along with playwrights, directors and performers moving into positions of power and influence, it’s obvious that changes in subject matter and presentations are coming down the pike.  Welcome to the 21st century.

Matthew Bourne is a creative, innovative, trail-blazing, Impresario with solid gold credentials and a winning track record.   Word on the street has it that Bourne is contemplating a production of “Romeo and Juliet”, as a possible next production.  That will be one gender-bending, diversity-infused production that I can’t wait it to see.

“Swan Lake”, currently on stage at the Ahmanson Theatre will perform through January 5, 2020.