In Transit on Broadway 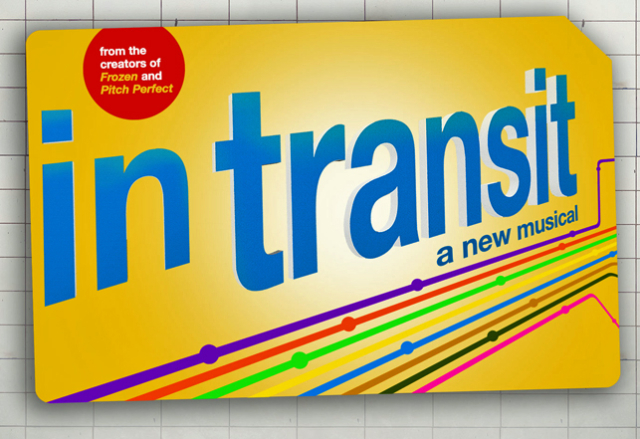 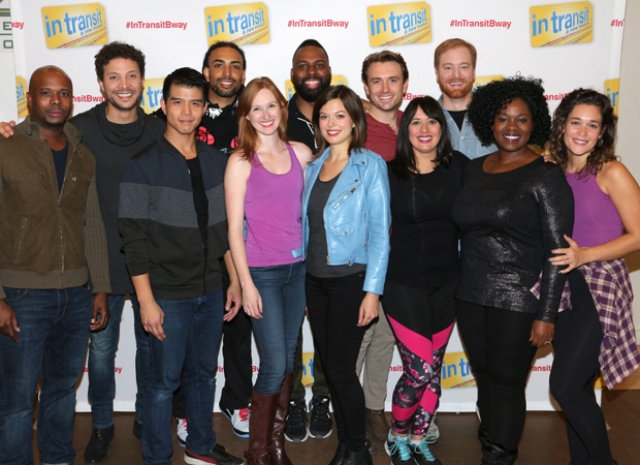 In an elongated U shaped configuration the audience of Circle in the Square is seated around a long thrust platform with an anchoring wall at its end.

For the new musical In Transit the set by Donyale Werle evokes a New York subway station with entrance and cashier’s box, turnstiles above leading down to a platform.

In a prologue we meet the amazing vocal impressionist Boxman (Chesney Snow or Steven “Heaven” Cantor). Using a mic and portable amp he works commuters for spare change by entertaining them with amazing sound and syncopations. He also sketches in a bit of the back story of the where, what and why of this distinctly urban creation.

It may be lost on tourists who take cabs and busses around Times Square but anyone who is familiar with the NY transit system will identify with this fresh new musical.  There is much to enjoy in the familiar characters and tropes of this delightful, sanguine and energetic production.

While individuals, including Boxman, are featured with solos and cameos this is more of a stunningly wonderful, a capella ensemble piece than a star vehicle for a marquee actor lured from Hollywood.

Several of the actors are so fresh, inventive and compellingly all around wonderful that it is inevitable that they fast track to fame and fortune. This is just the kind of neat little Broadway sleeper that can catapult careers.

Never once glancing at my watch I just loved every minute of this often poignant and heart wrenching performance.

With its well-honed book In Transit provides a compelling thumbnail of what it means to be young, ambitious, talented and frustrated in the naked city.

There is a nice mélange of the usual suspects- a gay couple wanting to get married, a temp worker auditioning for roles on Broadway,  a jilted young professional working off energy running marathons, the aspiring trader who lost his job when a spoof of his boss went viral.

This mix of lonely hearts and broken dreams risks the obvious but skirts around that with super navigation from the director Kathleen Marshall.

Using a range of props modular elements quickly morph from subway seats to an airplane conveying the gay couple home to four days with a devoutly Christian and staunchly disapproving Mom.

There are other instances of love lost and gained.

That down on his luck broker gives his number to the aspiring actress. But when she calls the phone is disconnected for non payment. Surprise, they hook up later and in the finale he has their baby strapped to his chest. Oh joy.

The singing, both solos and duets as well as a capella ensembles, is just terrific. Particularly with the versatile Boxman laying down a beat you never miss the band.

There are wonderful musical moments.

We really feel for Trent and Steven conveying the ordeal of not being themselves during “Four Days Home.” Nate, who pulled that prank on his boss is truly screwed in “Broke.”

The hilarious “Wingman” shows how guys team up to troll the ladies in bars. “Not There Yet” is the mantra of life in transit on every level.

For a truly delightful evening of pure entertainment hop onto In Transit and don’t get off until the last stop.