Billy and Me by Terry Teachout. 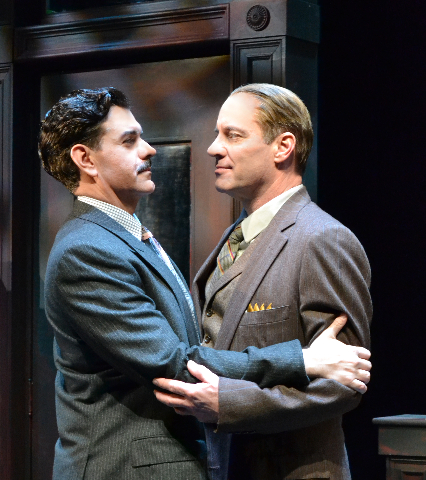 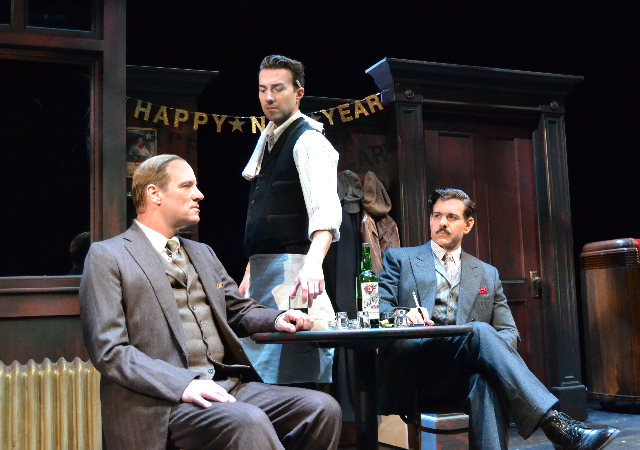 Characters down alcohol with an equilibrium-upsetting frequency in Billy and Me, a new, engrossing, thought-provoking memory play receiving its world premiere production at Palm Beach Dramaworks through the end of the year.

One of the principle characters is, surprise, surprise, Tennessee Williams. The late, great playwright was known as much for his drinking as his steamy, sultry, poetic works about passion, desire and sex.

But while the characters in Wall Street Journal drama critic Terry Teachout’s play are drunk on booze, they also exhibit withdrawal symptoms from something else that can be highly addictive: Success.

However, unlike the seemingly-endless supply of alcohol present in the scenes, there’s nothing to satisfy their craving for refills of triumph.

Well, at least Williams has fellow playwright William Inge with whom to commiserate.

The two prove that people, especially artists with outsized egos such as themselves, may need constant helpings of triumphs in order for their lives to be tolerable. You’ll notice the key word here is tolerable, not necessarily happy and content.

At least some of us can take comfort in knowing we’re not alone with similar feelings. Even the greats experience withdrawal signs such as insecurity, a search for identity, loneliness and even jealousy if too much time elapses between moments of success.

The play, which sprung from an idea by PBD’s producing artistic director, William Hayes, will run through Dec. 31.

That is the date in which Teachout’s play technically begins, as the year 1944 is about to end.

Symbolically, New Year’s Eve is an appropriate day for this historical comic-drama to start.

We begin in a run-down, somewhat cramped and dark bar near the Civic Theatre in Chicago. That’s where Williams’ The Glass Menagerie received a pre-Broadway tryout.

From the nearby bar, Inge is about to embark on a journey toward a new beginning. The introverted Inge will emerge from his “shell,” become more honest and open about himself, and discover a talent he likely never knew he possessed.

The source of Inge’s inspiration is none other than Menagerie. The play catapulted Williams into the limelight, earning him accolades for the poetic work. The original production spawned several Broadway revivals. Williams went on to write many more hits, notably A Streetcar Named Desire and Cat on a Hot Tin Roof.

The basis for Billy & Me is the true story of Inge’s visit to Chicago to witness a performance of Menagerie. At the time, the future Pulitzer Prize-winning Inge worked as a drama critic at a St. Louis newspaper, when he met Williams and interviewed him. It seems the Kansas born-and-bred Inge was so enamored by The Glass Menagerie that he became inspired to become a playwright. Inge, like Williams, wrote from personal experiences from his boyhood in Independence, Kansas, penning plays dealing with strained sexual relations and lonely characters.

In his script, Teachout describes Billy & Me as a “work of fiction, freely based on fact.”

The play’s framing device bears explanation. The action doesn’t technically begin at the end of 1944, but in the present. An aging Williams, from an unspecified locale and in a kind of hangover, dream-like state, hears voices from his past. Those voices include that of his mother, Edwina, the inspiration for the character of Amanda Wingfield in Menagerie. We also hear him speaking to Inge, purportedly from the time Inge came to Chicago. Those voices merge in a cacophony of sounds that, in the production, nicely reinforces that dream-like state of confusion. An object which resembles a ghost light is on stage, further enhancing the mystery surrounding the location and circumstances.

A frightened, confused Williams, clad in glasses, a hat and a tattered bathrobe, looks up. Where is he? What’s going on?

In a device that calls to mind Thornton Wilder’s Our Town, a “stage manager” enters, and Williams assigns him different roles throughout the play. The stage manager also explains to the playwright why he’s on-stage: he has one last story to tell – the story of he and Billy. With that, we flash back to 1944.

Teachout’s use of meta-theatrical devices, including creating Billy & Me as a memory play, makes sense. These devices mirror techniques used in Menagerie. It is, after all, the play that inspired Inge’s transformation from insecure, closeted homosexual and critic to a masterful writer. He became more confident in himself producing multiple hits as a playwright (including the Pulitzer Prize-winning Picnic). Like Teachout’s play, Menagerie includes a magical narrator able to step in and out of the world of a play.

During the first and second acts, Williams and Inge find themselves at different points in their careers. In the first, the poetic playwright nicknamed after a state is about to experience a meteoric rise in his career. Toward the end of the first act, Inge lauds Menagerie.

Inge’s “crystal ball” will prove accurate…and then some.

In the second act, set in November, 1959, Inge is suddenly a successful playwright, with four straight hits. Williams’ career is on the downswing. But it’s been two years since Inge’s last hit (1957’s The Dark at the Top of the Stairs) and the playwright is experiencing success withdrawal. Negative reviews have just come out for his 1959 play A Loss of Roses. Williams, meanwhile, is jealous of Inge’s string of hits. The two exchange harsh words. But fellow artists have ways of making up and coming to each other. In the process of that happening between Inge and Williams, we learn, among other things, why they are compelled to write.

The second act is Teachout’s guess as to where Williams and Inge were on the early morning of Nov. 29, 1959. There’s no historical documentation of the two men’s whereabouts, but Teachout’s guess is entirely plausible.

All in all, Billy & Me is touching, funny, cathartic and a human story instead of a history lesson. There’s more than enough conflict to keep us interested, even if the play is winded at times. In Palm Beach Dramawork’s intimate auditorium, we feel like we’re eavesdropping on two greats of the American theater. Such a feeling wouldn’t be possible without a top-notch production.

Hayes, who directs with sensitivity, has coaxed multi-faceted, nuanced performances from Nicholas Richberg (Williams) and Tom Wahl (William Inge). There’s more than a hint of sexual tension (the pair might have had a fling around the time, although historians aren’t sure.) There’s also palpable conflict between the two, during which heat radiates from the stage.

The production runs for two hours and 15 minutes, yet it never drags. The first act, in particular, flies by.

Richberg’s Williams constantly commands attention. The actor invests the poetic playwright with a southern, genteel charm and speaks in a thoroughly convincing accent. Listening to Richberg might bring to mind Kevin Spacey’s voice in the 1997 film Midnight in the Garden of Good and Evil.

Wahl, like Richberg, fully inhabits his role. He endows the insecure, inhibited Inge with appropriate nervous mannerisms. Whether he’s clutching a handkerchief, tensing his shoulders or stuffing his hands in his pockets, it’s clear Wahl’s Inge is uncomfortable, especially in the beginning. It’s as if he’s trying to hold in information about himself because he’s not confident in revealing it.

While, as an introvert, Inge is the less “showy” character, Wahl insures he’s never dull. He imbues him with a nervous, vibrant energy. There’s a sense that this man is ambitious and wants to accomplish more than he has in life. When it comes time for Inge to break down, Wahl's broken voice sounds so authentic, you want to comfort the man.

Scenic designer Victor Becker’s depiction of the bar in act one is claustrophobic. The dingy, dusty walls make you think the establishment is not only old, but has seen better times. In act two, Becker’s depiction of Wahl’s apartment suggests an elegant home, allowing us to use our imagination to fill in the blanks. This fits in with Williams’ belief that scenery shouldn’t be too realistic.

“The straight realistic play, with its genuine Frigidaire and authentic ice cubes…has the same virtue of a photographic likeness,” the playwright once said. “The theater, however, ought to be concerned with poetic truth, which can only be represented through the transforming power of metaphor, suggestion and imagination.”

Paul Black’s shadowy, dark lighting is non-realistic and appropriate for a memory play.

Teachout, who has lauded the work of Palm Beach Dramaworks, has written not only a memory play but a memorable one. It ends with Williams addressing the audience. He leaves us relevant questions to ponder, in keeping with PBD’s slogan of “theater to think about.”