Botstein Delivers Grim but Worthy Music of the Eastern Bloc 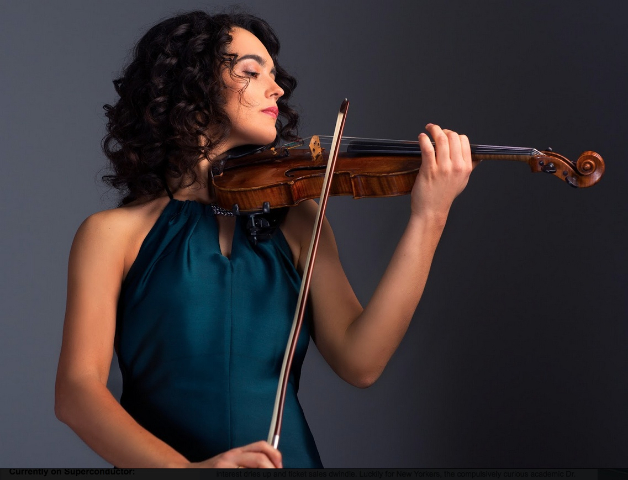 Alena Baeva, soloist with the American Symphony Orchestra
On Thursday night, Dr. Leon Botstein directed his ASO forces in a long and compelling program titled The Triumph of Art at Alice Tully Hall. Its purpose: provide much needed exposure to composers whose careers largely took place on the shadow side of the Soviet empire. This concert featured two works by the Polish composer Grayna Bacewicz and important symphonies by Bohuslav Martin and Alfred Schnittke. All are worthy of inclusion by some future artistic director with ambition and taste.

The evening opened with Music for Strings, Trumpets, and Percussion by Bacewicz. Following a shaky opening, conductor and orchestra settled in to lay out the themes for this work, which included complicated contrapuntal writing in the low strings, a bevy of struck instruments and celesta, and five trumpeters standing upstage. Bacewicz is a composer unknown to this listener  and almost unknown in the West. She was a virtuoso violinist and performer but her career took place almost entirely in Poland. This work revealed her to be be a colorful and fearless orchestrator whose work is well worth further exploration.

Martin is slightly more famous. He is the direct heir to the symphonic tradition of Smetana, Dvorák and Janácek, the next in a sequence of Bohemian composers that stand like a series of great medieval kings. However, Martin's realm was a small one, carved out mostly in a long period of exile after Communists took over his native Czechoslovakia. A tonal composer working in a climate hostile to his art, he created six brilliant symphonies and a vast catalogue of other works: almost all of which stand neglected. His Sixth Symphony was on display here, a sophisticated three-movement work making rich use of the orchestra's colors and incorporating passages that are a sore test for any ensemble.

Happily the ASO passed it with flying colors. Under Botstein, this orchestra's output can be variable and verges on inconsistent. But recognizing that they had a truly great piece to play, the musicians responded, giving a charged and rapturous performance. Anyone who heard this who had a position of responsibility with a symphony orchestra should give serious consideration to programming the deep and fascinating orchestral works of Martin: this would be a decision that would not be regretted.

The second half started with a second work by Bacewicz: her Seventh and final Concerto for Violin and Orchestra. Here, soloist Alena Baeva was the main focus, playing sophisticated slithering runs on her instrument and steering through treacherous slurs and atonal lines that mimicked the sound of the human voice in distress. The violins of the ASO followed her in this nimble steeplechase, coursing through the bleak landscape of this work with determination and grit. This was sonically and musically the most interesting work of the night.

The concert concluded with Alfred Schnittke's Symphony No. 5. Written in 1988, this piece also occupies a spot in his catalogue as Concerto Grosso No. 4. This is a hybrid composition, incorporating features of both genres. In the first movement, a small ensemble of violin oboe and harpsichord played against the tutti of the expanded orchestra. The concertmaster then moved next to the piano with a cello and a viola, creating a second group for the second movement. This humorous movement has its roots in a little known chamber work by Gustav Mahler. The last two movements were conventionally symphonic: slow funereal dirges that took the sprightly opening tune and encased it in a concrete sarcophagus of sound, sinking both this symphony and the listener to the bottom of a very deep, very cold lake. Grim stuff, but worth hearing. (Reprinted with permission from Superconductor).
Back to Front Page Section Home