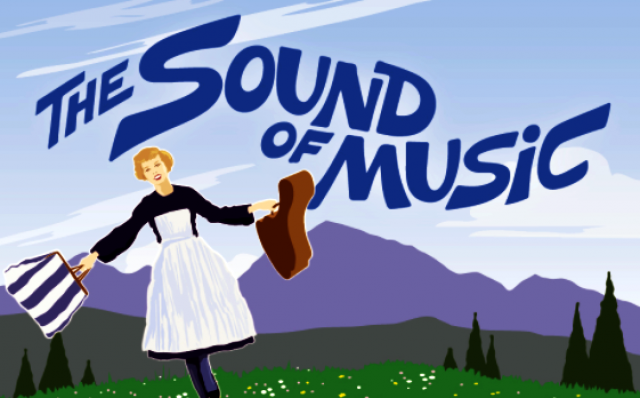 Live theatres all over the country are mounting their various Holiday versions of Christmas-themed plays and musicals.  The Palm Canyon Theatre, the city’s oldest live theatre, is no exception when it comes to presenting classical Christmas entertainment to its audiences.

“The Sound of Music”, is a show that the whole family can enjoy. It’s based on an inspirational true story of the famous Austrian von Trapp Family Singers and their escape to Switzerland on the eve of Germany’s 1938 Anschluss, and it’s annexing of Austria prior to World War II that will break out one year later.

The story in short - unless you have been living in a cave for the last 100 years  -  revolves around Sister Maria a young novitiate from ‘The Abbey’a local nunnery, who takes a temporary leave to fulfil a three month position at the behest of her Mother Abbess as a replacement governess for retired widower and aristocrat of the Austrian Navy, Captain Georg von Trapp and his seven children ranging in ages from 16  to a 7 year old.

Captain von Trapp has been raising his children on a very large family estate as if they were crew members under his command   He has taught them navy coded Bosun’s mate whistles whenever he wants to talk to them in person.   Into this very unorthodox style of raising his family comes the energetic, independent- minded, free spited, young female, Sister Maria, with a love of the almighty, children and nature, in that order and all the creatures who inhabit it.   Fasten your seat belts!

The Sound of Music story has seen many productions over the years.   It opened on Broadway in 1959  as a stage musical.  Since then it has been seen several more times on Broadway as stage revivals.   When the 1965 movie was released, it became the highest grossing film for five straight years in film history.  Its pedigree is solid gold and world famous as the movie that starred a then unknown twenty year-old Julie Andrews as Maria and 34 year-old Canadian Shakespearean actor Christopher Plummer as Captain von Trapp, continues to live on at the PCT stage.

A note for the audience: The Palm Canyon Theatre (PCT) production now playing is the’ live stage version’ script, not the movie version. But the talented creative team and a cast of twenty nine performers who make the serendipitous stage magic happen is up to the challenge.

It isn’t possible to list every performer due to space restrictions, but there are always standouts.   First and foremost, is the performance of Se Layne, as Sister Maria that is absolutely astounding when one considers the pressures of directing, choreographing, and then having to unexpectedly perform on short notice along with a cast of twenty nine characters who must quickly rehearse with the new arrivals; is nothing short of daunting.

Mia Alexander as Liesl, the Captain’ oldest daughter, and Virginia Sulick as Elsa Schraeder, a former love interest of Georg came on board just a few days before opening on December 5, 2021. There is a lot of truth and courage to the show business axiom of “the show must go on.”

The musical production led by Theatre Co- Artistic Director Se Layne, who is also the play director and choreographer somehow found time to step into the leading lady role of Sister Maria when three of her principal actors were suddenly forced to withdraw just a week prior to opening due to medical issues.  I don’t know of a single 501(c) 3 theatre company that could weather a blow that severe.

Of course, the adult performers Sheldon Safir as Max, The family’s performer manager and agent merely soldier on without missing a beat.  Michele Davis as Housekeeper Frau Schmidt, try’s her best to control the mischievous children when Captain von Trapp is away at sea duty.  The don’t likes governesses, that is until Sister Maria, takes over.

It’s those adorable little children that concerns one.  Can they adapt to new strangers being on stage with them when one of them has never even been on a stage before?  You bet they can and they do.

The Nuns of the Abbey led by Jaci Davis as a sensitive caring Mother Abbess, also scores with her glorious rendition of “Climb Every Mountain”.

Lighting designers J.W. Layne and Kay Van Zandt; provide just the right amount of light to see and appreciate the wonderful graphic designs and back-drops of Nick Edwards, which lends great authenticity to the overall visual settings and locations.  It’s a nice production touch for the audience.

The PCT production is once again brilliantly costumed by Resident Designer Derik Shopinski who also stage manages the show.  One can only imagine the traffic management issues going on back stage on this production.  The “willing suspension of disbelief” is definitely called for here.  Ahh, the joys of live theatre.