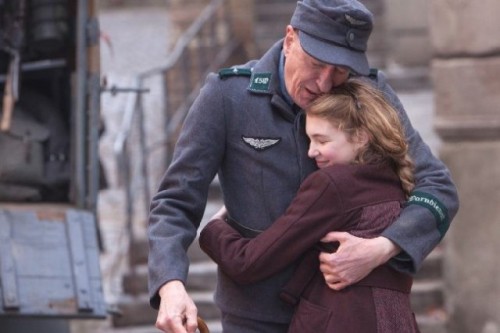 Geoffrey Rush and Sophie-NÃ©lisse in The Book Thief. 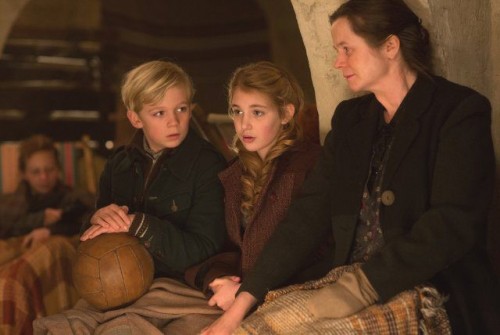 If you yearn for the good old days when movies told a story with actors instead of CGI (computer created images) special effects, aliens, or monsters, then I have a movie to recommend to you.

“The Book Thief” based on the international best selling novel of the same name by Markus Zusak, is intelligently and sensitively directed by Brian Percival, from a wonderfully crafted screenplay by Michael Petroni.  It’s a small, touching story with large emotional issues that is flawlessly and understatedly performed by a cast led by Oscar winner Geoffrey Rush, and Oscar nominee Emily Watson, and stars young French-Canadian teen actress Sophie Nelisse in the title role as Liesel Meminger.

The suspense drama set in wartime Germany (1938 –1945), revolves around young orphan Liesel Meminger, who is sent to live with foster parents Hans and Rosa Hubermann (Geoffrey Rush and Emily Watson) following her separation from her communist mother by the Nazi government.  Once settled into her new school she meets next-door neighbor classmate Rudy (Nico Liersch).  Rudy is taken with this newcomer       becoming friends.  Liesel develops a strong interest in the reading books and thanks to the Buergemeister’s wife, (Kirsten Block) is allowed to read in her private library.

Liesel’s daily life is interrupted late one night when an exhausted, young Jewish refugee, Max Vandenburg (Ben Schnetzer) appears at the family’s front door looking for a safe place to rest.  Hans and Rosa agree to hide him from the government and swear Liesel to secrecy.

“The Book Thief”, contrary to popular belief concerning warring nations, is simply a story of ordinary people trying to live life amidst the hell of Hitler’s Third Reich and WW II (not everyone was a Nazi zealot).   Director Percival, who comes to the movie fresh from the success as the director of the TV mega-hit “Downton Abbey”, uses the voice of English actor Roger Allam to portray the character of Death throughout the film.  Its use is both soothing and disarming, but extremely effective.

Screenwriter Petroni and director Percival imbue their story with just the right amount of suspense and just the right amount of pathos without slipping into bathos.  The film is blessed with a production designer (Simon Elliott), an editor (John Wilson), a costume designer who knows the period (Anna B. Sheppard) and a musical score by the great John Williams.  It’s a two-hour screen visit with quality moviemaking.  What movie fan could ask for anything more?  “The Book Thief” in my opinion is a strong Oscar contender in the Best Adapted Screenplay category.  Perhaps, even a possible Best Picture nomination, as well.   We’ll see come January 2014 when the nominations come out.

Rush and Watson are nicely nuanced in their portrayals, and young Sophie Nelisse is a real find with plenty of appeal and composure for a relative newcomer to the business.

If you’re tired of films that lack a compelling story to share, and merely rely on gratuitous gun use and war without end, then “The Book Thief” (with nary an f-bomb being heard) is for you.  By the way, there is nothing to apologize for when it comes to selecting a “feel good” movie every now and then.  The world could use a few more of them about now.