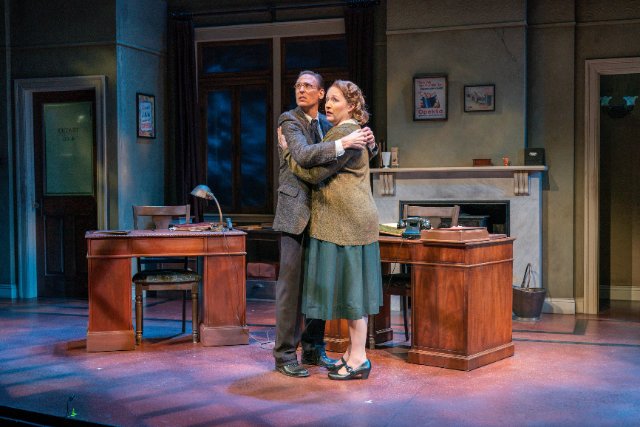 Photo by Alicia Donelan Photography Henk (Bruce Linser) and Miep (Amy Miller Brennan) comfort each other during a scene from Palm Beach Dramaworks’ world premiere production of The People Downstairs.

If you knew him, you may not have wanted to invite Mr. Visser to your house. His constant nerves may have made you jumpy. And his frank, even rude manner may have put you off.

Still, you have to admire Visser’s courage and deep concern for those whom the Nazis marked for suffering and death. He was just one of many ordinary, yet courageous, heroic individuals living during World War II. They refused to look the other way while the Nazis rounded up European Jews and others during the Holocaust.

It is a touching, gripping, heartbreaking, yet life-affirming new play. And it is experiencing its world premiere in a riveting and heartfelt, deftly acted and directed production by Palm Beach Dramaworks (PBD). The play’s polished debut continues through Dec. 19 in the nonprofit, professional company’s intimate playing space in West Palm Beach.

In The Diary of Anne Frank, we met the 13-year-old girl, her family, and others. We watched as they hid in four small rooms concealed behind a bookcase upstairs in the building where Anne’s father worked. Audiences listened as they expressed their desires, fears, and hopes. Most likely, audience members sympathized with them as we learned that, for more than two years, they had to remain statue-like still to avoid capture. That was especially true during the day, when workers were present directly below them.

Now, in The People Downstairs, audience members meet the folks who hid Frank and the others, kept them fed, informed them, and tried their best to keep them sane during an unimaginably stressful two years.

McKeever’s new play takes place in Amsterdam in 1942. The Nazis have occupied Amsterdam, among many other places.

We are in a large room on the second floor of an older industrial warehouse. More specifically, the play takes place in the headquarters of Travies and Company, a spice and jam trading firm which Anne’s father used to run.

Upstairs, the families are hiding. With the exception of Mr. Frank during a flashback, we never see them. Instead, we watch their hiders, employers of the company, try to remain sane and rational as the ever-changing situation before them pushes their patience and humanity to its limits.

Outside, explosions, air strikes, and counterstrikes pierce the quiet, and might even endanger structures such as the building housing the company. As food and other basic necessities become scarce, desperate people break into places and stealing. Further, the demand for hiding space increases as the Nazis force Jews and others, through writing, to swear allegiance to the Third Reich. Those who do not become wanted for arrest and worse. All of this increases the chance that someone will notice and report the Franks, the van Pels family, and Fritz Pfeffer.

Indeed, the tension is palpable. And in PBD’s first-rate production, the ticking of a clock between scenes further heightens the tensity and a sense that danger is imminent.

Certainly, Mr. Visser does little to make the situation calmer. McKeever, his face and neck flushed, credibly portrays this character. The playwright/actor imbues Visser with irritability, nervousness, and an abruptness that can turn just about anyone against him. If he has an opinion, it comes out of his mouth with little filter.

“Mr. Visser, you’re being uncharacteristically quiet,” a character observes during one scene, one of several moments of comic relief in the play.

Fortunately, McKeever, through performance and written words, also conveys a more gentle, caring side to the character. As much as you want to slap him at times, you want to comfort him during others.

During the character’s softer moments, McKeever’s facial expressions convey a sense of sincere devotion, vulnerability, and insecurity. In fact, you want to reassure Visser during such moments that he is doing the right thing.

In contrast to Visser, one of the play’s calmer characters is Mr. Kraler. Tom Wahl portrays him with a quiet confidence and determination, while also lending the proceedings a calm, reassuring presence. To Wahl’s credit, he makes Kraler intently listen to the other characters, smiling at times to boost morale. To be sure, Kraler is as concerned as the others, and Wahl’s expressions and tone of voice indicate this.

Meanwhile, Dennis Creaghan imbues Mr. Koophius with a business-like demeanor, but also a kindness that endears us to him. Naturally, as a result, we become concerned when this seemingly frail, older gentleman lands in the hospital due to a physical ailment. And the fact that Visser remains at the hospital with him helps to offset any bitter feelings we may have toward Visser.

It is nearly impossible to dislike Miep. In addition to helping hide Frank’s family, she kept Anne Frank’s diary in a drawer of her desk following the war, literally preserving the past for future generations.

In PBD’s production, Amy Miller Brennan, as Miep, presses the diary to her heart, reinforcing the character’s commitment.

Brennan lends Miep, who serves not just as a character but also the play’s narrator, a quiet strength, resolve, and sense of dignity. When Miep cries, it sounds and looks real.

In addition, Brennan makes us keenly sense her strong devotion to her husband, Henk. Bruce Linser plays him with an equally strong devotion, as well as an intense conviction and passion.

We especially feel for these characters, clad in Brian O’Keefe’s period-specific costumes, when two policemen enter the building.

Matthew Korinko, with a believable German accent, commandingly plays one of the officers with a threatening menace. In stark contrast, David Kwiat plays Mr. Frank with a sunny enthusiasm during a flashback, when the character is interviewing Miep for a job in the company.

Michael Amico’s set design is detailed and realistic. To his credit, the set looks sturdy, roomy, and carries the sense that it is a historic structure.

Kirk Bookman’s lighting not only provides focus, but deftly differentiates between realism and non-realism.

The People Downstairs accomplishes what quality plays often do. Namely, McKeever’s piece makes us care about and identify with its well-drawn characters. In addition, it forces us to look inward and possibly take action to improve society. Also, the play presents us with a timely, compelling tale that grabs our attention and never lets go.

During a time in which hostility and divisiveness are gripping our society, and incidents of hate as well as violence are rising to frightening levels, we need a play such as The People Downstairs. Specifically, we need it to coax us out of our complacency and make us realize that we have the power to make a difference — however small it may seem.

McKeever has eloquently written the play, and leavened it with enough humor to make palatable the piece’s darkness and brutal honesty.

Credit not just McKeever, but Hayes for recognizing the need for a play that reminds us that the world needs kindness, especially during turbulent times. Hayes commissioned McKeever to write The People Downstairs. It is a piece that shines a light on courageous folks who knew that they could not look the other way in the face of evil. Thanks, in part, to this play, they are receiving much-deserved recognition.

How to Get Tickets