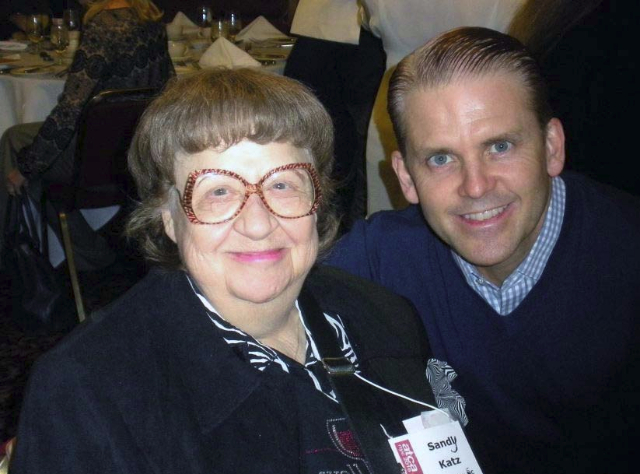 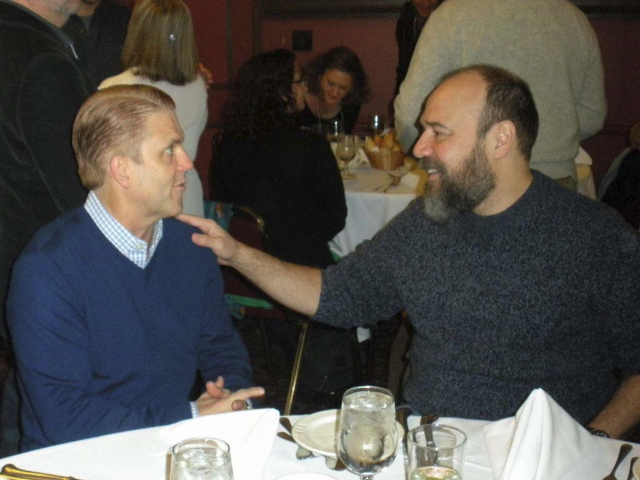 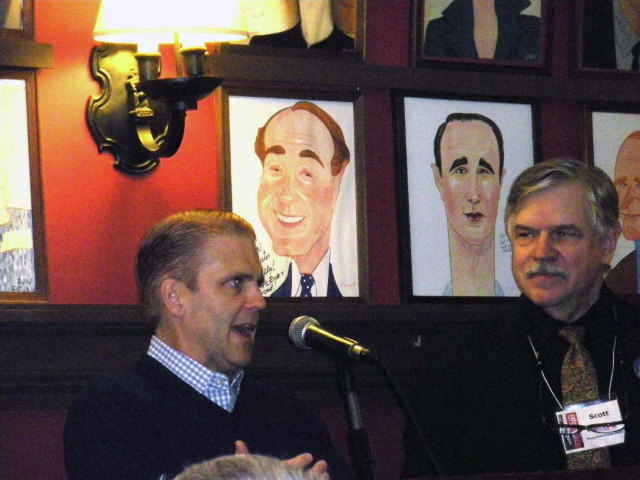 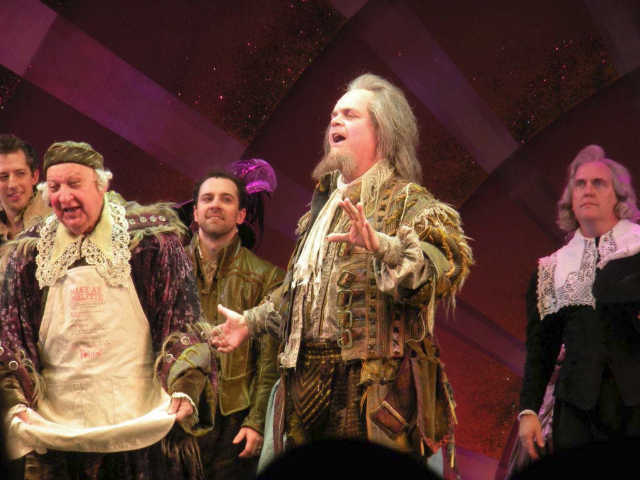 Sandy liked Something Rotten so much they saw it twice.

The annual Sardi's luncheon with the stars of Broadway gives members of American Theatre Critics Association (ATCA) an opportunity to percolate and circulate in a casual atmosphere. The stars of Broadway that usually are busy performing in 8 shows a week look forward to socializing with their peers.

Sherry Eaker did an extraordinary job planning our NY mini-meeting. She  invited several very interesting Broadway celebrities. There were many conversation and photo opportunities.  The guests were so accessible and happy to come to this luncheon.

Dining with a room full of theatre people takes your mind off the food because the morsels of dialogue and photographing the celebrities is always more delicious. My steak was a bit tough while my tablemate found his chicken too dry. However, who wanted to be eating when you had a celebrity willing to engage in conversation, which is why we attended the luncheon in the first place. One of the celebs at my table was Jessica Hecht  who played Tevya's wife in Fiddler on the Roof. She ordered the vegetarian option: basket of steamed vegetables and Tofu, with brown rice. She looked like she enjoyed her selection. I would suspect the vegetarians made out the best since they all finished their basket with a big happy smile.

Also at my table was Danny Burstein, as Tevya in Fiddler on the Roof. Since we had an opportunity to enjoy the magnificent revival of Fiddler on the Roof the previous night, we were able to tell Danny how much we enjoyed his performance. Both Jessica and Danny were outstanding celebrities that I couldn't take my eyes off and listened intently to their every word.

Lucky we already saw the musical Cagney since Robert Creighton, actor and star of Cagney came to our table to schmooze with me and Danny. Robert had his understudy perform Cagney when we went to see the musical. The understudy was a dead ringer for the character James Cagney. We were happy that we were old enough o remember Cagney in his gangster movies as well as his musicals.

Sherry kept the lively presenters and celebrities moving along smoothly. Sherry told the audience a short background of information about the ATCA critics that were presenting a celebrity. The ATCA critic gave a short introduction and a question for the celebrity to ponder. Many presenters had a personal interest in their celebrity which made the luncheon most enjoyable, and a learning situation enlightening us to some secrets of their success along with their trials and tribulations.

Howie Shapiro from Philadelphia presented Director Diane Paulus of Waitress while our ATCA chairman Bill Hirschman presented Josie Rourke, director of Les Liaisons Dangerous. Jonathan Mandrel from New York City presented Mandy Gonzalez, actor from Hamilton. Since Hamilton is now the hottest musical on Broadway some critics wanted to know the secret of getting a Hamilton ticket. On the  bright side, Hamilton will be going regional and some Chicago critics may have a better chance to get a ticket in Chicago.

Also among the Broadway celebrities were: Denis Arndt (actor, Heisenberg), Rachel Chavkin (director Natasha, Pierre and the Great Comet of 1812), Julianne Boyd ( artistic director, Barrington Stage Company), William Finn (composer, Falsettos) The Q Brothers (actors, Othello:The Remix) and Something Rotten star Brad Oscar whom I had to hug for his tremendously fantastic show-stopping performance that beckoned me to see it again for a second time. Something Rotten heads out to regional theatre where I hope it comes close to my home in South Carolina.

Sardi's is known as a Continental restaurant with hundreds of celebrity caricatures on its walls as Sardi's claim to fame and reputation for the   pre- and post-theater hangout which had late hours to accommodate the theatrical performers and patrons alike.

Sardi's Restaurant trivia worth remembering: Sardi restaurant is the birthplace of the Tony Award: For many years Sardi's was the place where the Tony Award nominations were announced. Sardi's is today considered a Broadway institution.