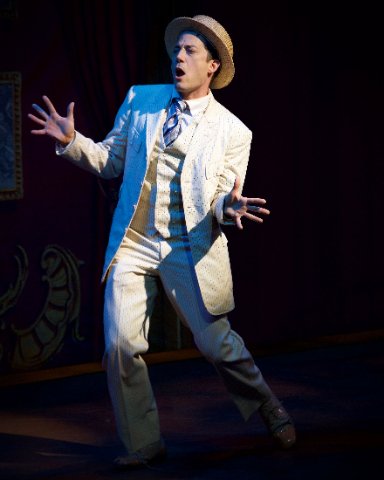 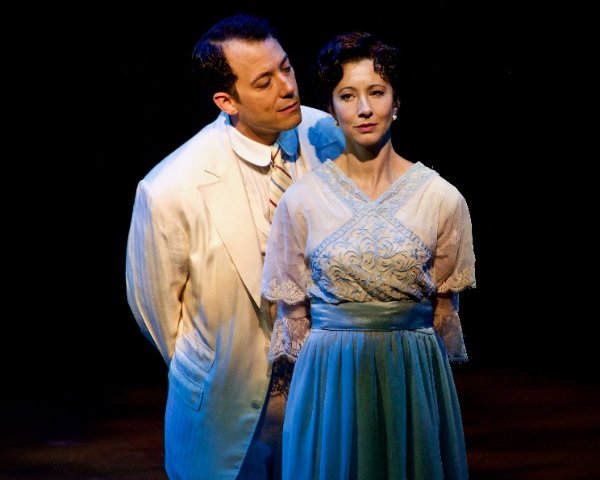 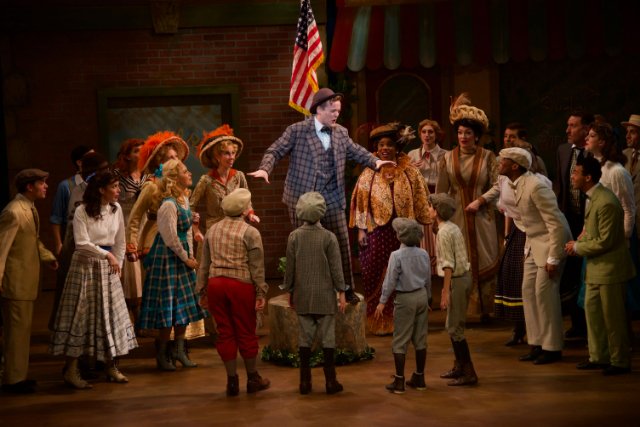 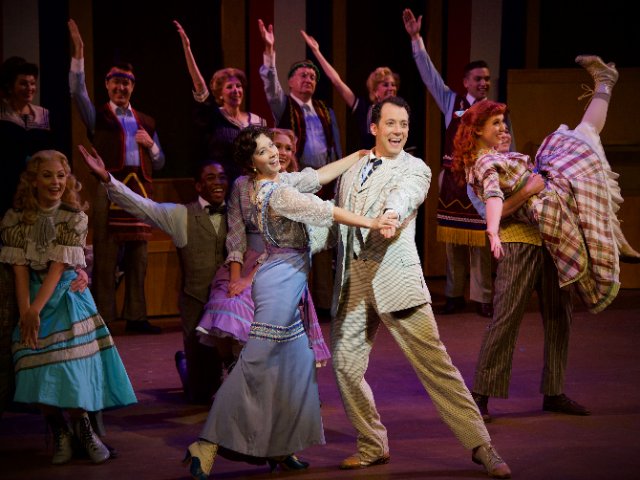 Before Lin-Manuel Miranda there was Meredith Willson.

Sure, Miranda’s bold use of non-traditional musical genres in Hamilton may have changed the way writers create musicals.

But in the late 1950’s, theater audiences and professionals probably thought that the late, multi-talented Willson’s creative use of song in The Music Man was just as revolutionary.

One can enjoy this beloved, classic 1957 musical’s sense of nostalgia and marvel at Willson’s creativity while experiencing The Wick Theatre’s vivacious and convincing production. This mounting by the Boca Raton regional theater runs through Dec. 28.

While watching the show, consider Willson’s use of rhymed verse, without melody, at the beginning. It mimics the sounds of an accelerating and decelerating train. Surely, you know this piece as “Rock Island.”

Then, think about Willson’s deft use of counterpoint -- songs featuring separate lyrics and melodies which harmonize, meant for performers to sing them together.

For example, the musical’s signature tune is a lilting waltz (Goodnight, My Someone”) and later a show-stopping march (“76 Trombones”). It’s the same melody sung to different tempos. And late in the show, the two lead characters, Harold Hill and Marian Paroo, sing both songs. Paroo sings a verse from “Goodnight My Somone.” Then, Hill sings a verse from the “76 Trombones” and so on. This alternating method, within the same sequence, serves to bring the characters closer together. It also demonstrates how similar the numbers are in melody, if not in tempo.

Speaking of demonstrations, The Music Man’s cast – the largest in The Wick’s history – proved on opening night their skill in mastering Willson’s difficult music.

Tartaglia, who boasts a strong, clear singing voice, sings the rapid-fire patter song, “Ya Got Trouble” with seeming effortlessness. In fact, you’d swear this tongue-twisting, rhythmic speech is the performer’s natural way of talking.

The actor punctuates his performance with appropriate gestures. He also imbues Hill with credible charisma, confidence and a dramatic flair, while proving to be nimble. The award-winner invests Hill with a believable earnestness and sense of urgency. As  the character speaks to River City citizens, he leans into them. His eyes widen and his voice and expressions betray intensity and sincerity. Also, this fast-talking, slippery-as-ice conman manages to convey charm and, finally, tenderness at the end. He’s obviously a changed man by then.

Of course, it’s a stretch to believe that Hill actually taught the town’s youth a song. After all, he doesn’t know anything about music. Then again, this is a musical. And so, everyone expects a happy ending. The Music Man offers one: Somehow, magically, the boys end up playing a song at the end.

Speaking of magic, there’s a sense that Tartaglia’s Hill is an artful magician. For instance, he makes a wand appear seemingly out of nowhere. With the notion of Hill as a magician, it’s more plausible that he somehow made his “Think System” work on the boys.

If only it worked as easily on some of the other characters. However, the town’s piano teacher/librarian, Marian Paroo, isn't as gullible.

Julie Kleiner slips into the role. She lends her character a believably skeptical air, while making her seem prim and proper, uptight and high-strung. In particular, her exasperation is palpable during the teasingly playful “Marian The Librarian.”

To her credit, Kleiner also uncovers a romantic, tender and dreamy side of her character. This becomes obvious during sensitive renditions of “My White Knight,” “Goodnight My Someone and “Till There Was You.” Kleiner, who boasts a soaring, expressive and strong soprano, sings the latter as a duet with Tartaglia. And thanks to the performers, their characters share a believable and touching romantic chemistry, and undergo a believable transformation.

While Tartaglia and Kleiner offer impressively natural and nuanced portrayals, that can prove challenging for actors playing River City’s eccentrics. Specifically, a performer must credibly portray oddness without slipping into caricature. For the most part, cast members succeed. That’s particularly true for Angie Radosh. She conveys a believable aura of blissful gullibility as the mayor’s wife, Eulalie MacKecknie Shinn.

On the contrary, Kevin Reilley overacts as Mayor Shinn. The performer creates a Grinch-like character. He’s so grouchy, vengeful and bitter, it’s hard to believe he’d even participate in his town's Fourth of July festivities. Indeed, this mayor is more caricature than believable character.

Larry Buzzeo fares better as Charlie Cowell, a traveling salesman out to expose Hill as a fraud. Without overdoing it, the actor lends Cowell an acerbic, rough air.

By contrast, Wesley Slade creates a lively, colorful and conspiratorial character in Marcellus Washburn, Hill’s friend and former partner-in-crime. Slade is fun to watch. That is especially true during the character’s playful rendition of “Shipoopi.”

The number features strong dance moves by Slade and the ensemble. In fact, one of the production’s strengths is the cast’s energetic execution of the vibrant, creative choreography, under the guidance of choreographer David Wanstreet.

While the cast’s sweet moves and the characters’ eccentricities will likely endear you to them, so, too, will a little boy. His name is Winthrop, the brother of Marian Paroo and son of their mother, Mrs. Paroo (an optimistic Ellie Pattison).

During the reviewed performance, Neo Del Corral, as Winthrop, convincingly transitioned from a shy boy with a lisp to a more open, happy child. Neo, who alternates with Blake Rubin in the role, is surprisingly dynamic and assertive.

Of course, one reason for Winthrop’s transformation is the hope that Hill offered him of a band’s formation and performances.

The Music Man, which beat out West Side Story for the Tony Award for Best Musical in the late 1950’s, played on Broadway during a turbulent time in America. Even with World War II over, the country would experience many changes. And those who expected a return to normalcy following the war needed hope and optimism.

Despite its simple story, The Music Man focuses on many themes. They include the need to embrace people’s differences and eccentricities, the benefits of arts education as well as the power of positivity and optimism. The latter becomes evident at the end, when the band members struggle mightily to perform. Still, they’re able to play enough notes to suggest the semblance of a song. So, you can forgive the townsfolk for being grateful and forgetting the misdeeds of Hill. He gave the youth something to look forward to, and brought excitement to River City. Oh, and he somehow got them to play their instruments.

The band members are the only live instrumentalists in this production. The Wick is using tracks to accompany the performers when they sing. While the recorded music produces a clear, pleasant sound, it is not the same as having a live orchestra. After all, this is live theater. Besides, live musicians would create a more glorious sound.

On a more positive note, the actors playing the barbershop quartet produce a sound as gorgeous as a richly-sounding instrument. The voices deftly complement each other as individual sounds. Moreover, they coalesce so perfectly, you’re convinced that these men have comprised a barbershop quartet for decades.

For the most part, sound designer Justin Thompson makes these men and the other performers sound great. However, on opening night, there were times when the microphones malfunctioned.

While the musical performances stand out, including a truly show-stopping “76 Trombones,” and tender, touching ballads, Jose Santiago’s lighting creates the right ambiance without calling too much attention to itself. Ditto for Nicholas Doyle’s realistic set design. It includes authentic-looking set pieces and striking painted backdrops.

A key to a successful production of The Music Man is capturing a sense of Americana and the idiosyncrasies of these near turn-of-the-century characters. But at the same time, a director doesn’t want the proceedings to seem too quaint or hokey. It’s a difficult balance to achieve.

But here, director Norb Joerder succeeds. He ensures that enough tension and drama emanate from  Harold Hill and those suspicious of him. But also, there’s enough emphasis on a simpler time and lifestyle that audiences can feel nostalgic.

From a staging standpoint, Joerder has the difficult task of bringing the large cast onstage without overcrowding the stage. While some actors are hidden in at least one scene, Joerder mostly groups them so that all are visible. And, in the process, the director creates striking stage pictures.

From the character-defining, period, colorful costumes to Willson’s glorious music and the true sense of Americana The Music Man evokes, it’s hard not to embrace this classic from the latter part of musical theater’s “Golden Age.”

The Wick’s production makes you fall in love with the show all over again.

The Wick Theatre's production of The Music Man continues through Dec. 28 at the venue, 7901 N. Federal Highway in Boca Raton. For showtimes, ticket information and to purchase tickets, visit thewick.org or call (561) 995-2333.