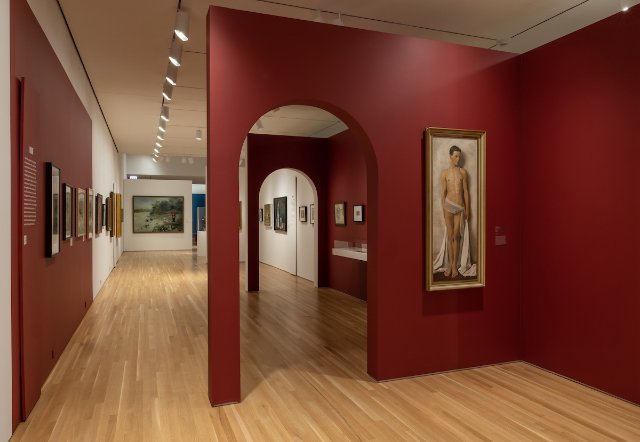 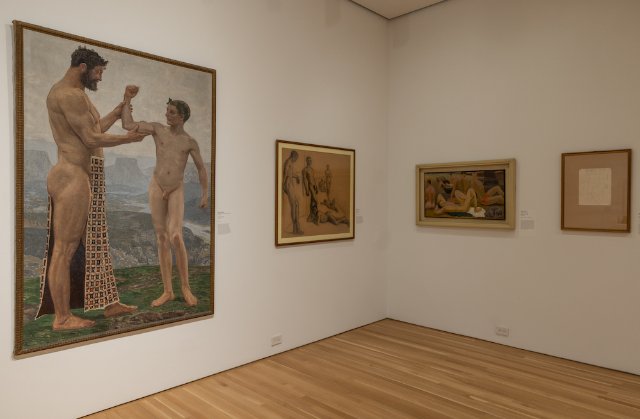 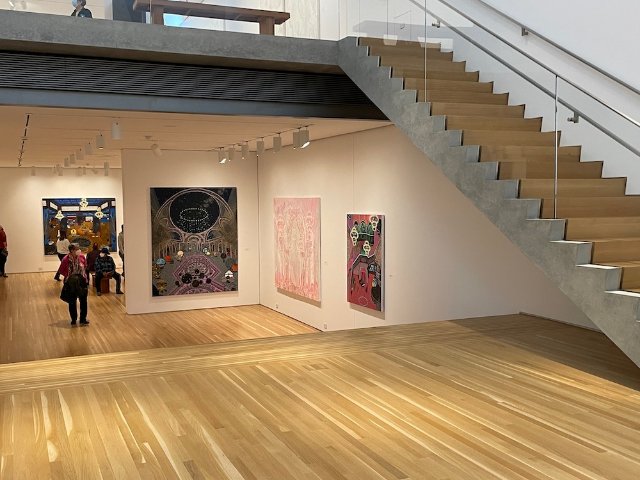 Two compelling exhibits are on display at Wrightwood 659, the Lincoln Park gallery dedicated to exhibiting socially engaged art and architecture. Michiko Itatani: Celestial Stage celebrates the work of the Chicago painter and her fascination with science and culture. The First Homosexuals: Global Depictions of a New Identity: 1869-1930 offers the first multimedia survey of early works of queer art. The latter exhibit is a preview to a much larger exhibition planned for 2025 at the gallery.

Michiko Itatani, born in Osaka, Japan, is professor emeritus at the School of the Art Institute of Chicago, where she has taught for 40 years. Curator Ashley Janke organized the exhibit of 60 large-scale works. Many of Itatani’s paintings depict “stages,” where science and art come together in improbable ways. She links baroque bookcases, helical staircases, Japanese tearooms, blazing chandeliers and musical instruments in colorful settings. The exhibit of her work begins on the fourth floor at Wrightwood 659, where the paintings tend to be darker and more abstract. On the third floor, color explodes in works such as “Cosmic Returning,” highlighted in red, and “Collection Sol III,” that emphasizes vivid blue. Itatani’s paintings suggest her fascination with science fiction and inner space vs. outer space.

The Celestial Stage catalog features an essay by curator Janke and a short story by the artist. The reproductions of Itatani’s paintings are excellent quality. The 76-page catalog is 8.5 x 11 inches and is available for $10 here. See the Itatani page at the gallery’s website for more information and videos where the artist talks about her work.

The second exhibit, The First Homosexuals: Global Depictions of a New Identity: 1869-1930, features more than 100 paintings, drawings, prints, photos and film clips drawn from collections around the world; some works have never been allowed to travel outside their countries. The First Homosexuals explores how early homosexuals viewed their own identity and how the broader culture viewed them. The images offer glimpses of the social and cultural meanings of same-sex desire.

The exhibit is a preview of a much larger exhibit to be presented at Wrightwood 659 in 2025. The exhibit is being developed by a team of 23 international scholars, led by art historian Jonathan D. Katz, professor of practice in the history of art and gender, sexuality and women’s studies at the University of Pennsylvania. Katz curated the 2019 exhibit at Wrightwood 659, About Face: Stonewall, Revolt and New Queer Art. The 2025 exhibit will present about 250 works and will include a comprehensive catalog.

The second floor space of Wrightwood 659 has been transformed into a series of rooms for The First Homosexuals exhibit, to lead viewers through the nine sections of the exhibit.

In Before Homosexuality, 19th century works show how same-sex eroticism was portrayed in an unself-conscious way—before the word “homosexual” was in use.

The Couples section features a boating scene painted by Louise Abbéma with her lover, the famous actor Sarah Bernhardt.

Between Genders includes many photographs documenting social experiments of the time, such as chanteuse Josephine Baker in male evening attire and an 1890s sepia-toned photo of a Black man performing in female drag.

Archetypes celebrates male beauty. Katz anchors the section with “Salutat,” a 1898 work by the eminent American painter Thomas Eakins. The painting portrays a victory in the boxing ring, but the audience’s attention  is focused on a perfect specimen of young male beauty.

The section titled Colonizing displays a disparate group of works illustrating how same-gender sex was viewed and presented in different regions of the world.

The final section, Past and Future, shows impressionist-style paintings and an early use of the rainbow to symbolize same-sex love. A painting by the Finnish artist Magnus Erickell depicts a reversal of the Leda and the swan myth, showing a nude man strangling the figure of Zeus in the form of a swan.

Curator Katz observes that current-day conceptions about homosexuality are only as old as the oldest living Americans. “Our goal in this exhibition is to read queer desire as it manifested itself in this not-so-long-ago past, while being alert to the very different forms it took globally.” He notes, “The First Homosexuals demonstrates that as estial Stagesthe language used to name same-sex desire narrowed into a simple binary of homosexual/heterosexual, art went the opposite direction, giving form to a range of sexualities and genders that can best be described as queer.”

Wrightwood 659 is located at 659 W. Wrightwood Ave. The gallery is in a 1920s building, the interior of which has been transformed by architect Tadao Ando with his signature use of concrete forms and natural light.

The two exhibits are on view Fridays 12-7pm and Saturday 10am-5pm through December 17. Tickets are $15 and can be purchased online only. You must purchase your tickets in advance; walk-ins are not permitted. Visitors must show proof of Covid vaccination and booster; you must wear a mask while you are in the building.

Note: Because of its explicit content, The First Homosexuals is for mature audiences only.

Photos are by Nancy S Bishop unless otherwise noted.