The Miracle of Long Johns by David Lefkowitz 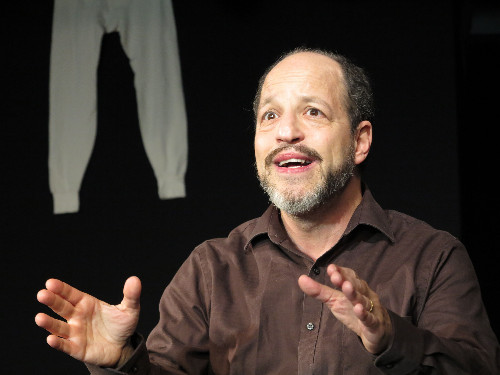 Three years ago, ex-New Yorker David Lefkowitz, now a Colorado based actor, writer, playwright, and popular radio personality, brought his one man show, Shalom Dammit: An Evening with Rabbi Sol Solomon, to New York City. The overall thrust of the evening, wildly performed by the playwright himself, was what it is to be a Jew in the 21st Century.

With a dizzying array of dance, song, and a plethora of double-entendres, and vaudevillian-type jokes, Lefkowitz, as the fictitious Rabbi Sol, like Picasso incarnate, tackled his subject cubistically, that is, from every conceivable angle—political, social, cultural, sexual, and otherwise.

Well, the Whirling Dervish was back again, this time, for one night only, as part of United Solos 2015, the world’s largest solo theatre festival. The show opens with Lefkowitz announcing to the audience that he’d like to tell us about the most embarrassing, uncomfortable, humiliating night of his life. And tell it he did for one hour and forty five minutes without intermission.

We are also made privy to the Ten Commandments that reviewers are expected to take into consideration when writing their reviews. They are the same admonishments, more or less, that the ever-fair Roger Ebert followed when reviewing film. Be on time, be prepared, pay attention, be honest, be fair, be specific, be open, be exacting, be at your best, and be ready for anything. Not surprisingly, this is good advice to follow in all of your daily doings.

As far as being tortured at the theatre Lefkowitz recalls sitting through comedies that could only aspire to be Moose Murders. “I sat through tragedies that were actual tragedies. I sat through musicals where a cell phone going off was the best song of the night. I sat through a family drama where the entire first act was a woman making gazpacho. And yet, somehow, the second act ended with the father, accused of being a child molester, pulling down his pants and screaming, “I’m clean! Look at my penis, mommy, I’m clean!”

We are further informed, a revelation to some theatergoers but not to reviewers like myself, that only one of out of some 600 plays – again no play is singled out by name – emblazons itself on your brain. You get such a play once every 600 shows. “No, really,” Lefkowitz says, “I’ve done the math. If you’re a practicing theater critic in a major city, you might see 200 shows a year. Every couple of years, you get one, the one. Number 600. And that keeps you going `til the next one.”

Quickly following up on this observation, Lefkowitz playfully warns the audience that the play they are now watching – The Miracle of Long Johns – is not The One. “Sorry,” he says, “This is just a silly little monologue about the most miserable night of my life.” Eliciting more laughs from the audience, in a clever bit about standing ovations, Lefkowitz jests “Feel free to rise at the end; I will not stop you. But don’t expect “Death of a Salesman”; this is “Mortification of a Critic.”

For the play’s coup de grace, Part Two, if you will, Lefkowitz going where very few performers go, other than the late great George Carlin who the playwright cites a couple of times during the evening, reverts to a tale that involves the playwright’s long johns and one big sloppy bowel movement, a story he claims he had been wanting to tell for decades.

And tell it he does. Sitting on a chair standing in for a toilet we are offered countless sounds, as well as a myriad of bodily and facial contortions from the slow beginnings of a rumbling stomach to a final atomic explosion that covers everything in the theatre’s tiny restroom.

Of course we are all shocked, as well as turning embarrassingly red-faced when Lefkowitz’s story takes an abrupt turn to the scatological. However, after accepting the fact, some of us faster than others, that we have all been there, done that, and more than likely more than once – who hasn’t pooped in their pants – the theatre audience, rollicks with laughter as a fusillade of referrals to our various bodily parts and functions fly by fast and furiously.

Mentions of the rump, bum, fudge, feces, asshole, tootsie roles, farts, breaking wind, a devil in my duodenum, shit slivers, lava, gravy, world war goo, and drenched in dreck – more than a sack full of euphemisms – are liberally strewn throughout the play. I might add, just when you think the story has hit below the belt it goes a lot lower.

More than likely, The Miracles of the Long Johns – considering this a preview - will return, as his last play did, for a longer run on theatre row next year. Then you too can get the full blast. So to speak!