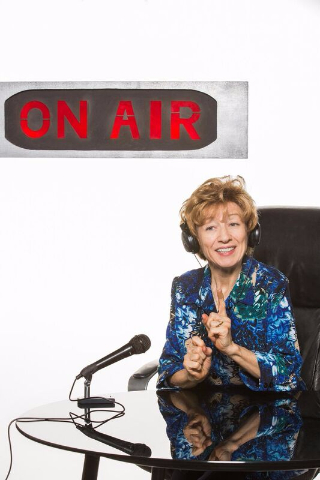 Chances are, you won’t have the opportunity to visit renown sex therapist Ruth Westheimer (“Dr. Ruth”) in her New York home.

The next best thing awaits you through Dec. 24 at suburban Miami’s GableStage.

That is where the media personality will welcome you with unbridled warmth and child-like enthusiasm into her home.

The “Fourth Wall” comes crashing down shortly after the ingratiating, revealing bioplay Becoming Dr. Ruth begins. We are her “company,” and she’s thrilled to share her story.

Becoming Dr. Ruth, a one-character show, runs through Dec. 24 in GableStage’s intimate playing space next to the Biltmore Hotel. Due to that intimacy, the character is able to enjoy a personal relationship with us, at times addressing one or two audience members.

The play feels like a “tell-all” story, in which Dr. Ruth basically tells us her life story. That’s excusable, because playwright Mark St. Germain’s play isn’t one-dimensional. It’s not all charming, all raunchy, all history lesson, all a downer or all a “talking head” standing in one place and lecturing us.

Thanks to St. Germain and director Joseph Adler, Becoming Dr. Ruth – and GableStage’s impressive production – is a combination of pathos, humor, drama and amusement that is sure to produce chuckles and possibly a tear or two.

Anne O’Sullivan plays Dr. Ruth with a convincing German accent without mimicking the woman. The performer makes you feel for this well-known media personality and want to give her a hug.

That is partly due to the child-like verve with which O’Sullivan imbues Dr. Ruth.

Throughout, she’s clad in a becoming blue blouse which matches her bright personality (Ellis Tillman is the costume designer).

O’Sullivan, a Broadway, Off-Broadway and regional theater actor of more than 40 years, never stands in one place too long. At one point, you’ll find her scampering across the stage, eager to show you some of her collectibles. During another moment, she’s rushing to her ringing phone. She’s smiling, obviously excited to talk, but also not wishing to keep the caller waiting too long.

O’Sullivan transforms herself into a loveable Dr. Ruth. She’s like a little old sweet lady who just made fresh coca and is eager to show off her collectibles in a museum that’s just opening for the summer after a long brutal winter. You might also say O’Sullivan’s portrayal is not unlike that of a child -- one who’s been waiting months to show a favorite auntie her collection of dollhouses.

Actually, this well-known woman has six such model houses. Arranging them just as she wishes, she tells us, allows her to regain a sense of control lost as a child.

This brings us to a part of Dr. Ruth’s life that many might not be familiar with; she’s a German-born, Jewish immigrant to the United States who hailed from an Orthodox Jewish family. She was able to escape the Nazis after her mother and grandmother sent her to an orphanage after the Nazis captured her father.

Shiver-inducing sound effects by Matt Corey and flashing, red lighting by Jeff Quinn enhance the sense of drama as Dr. Ruth relates her tale, which includes some moments of danger.

We learn about this woman’s outlook, the ups and downs during her multiple marriages, and a skill that will surprise many. O’Sullivan recalls her past with fondness and familiarity. Projections allow us to view family members while Dr. Ruth lovingly looks at them. Quinn enhances the aura of memory by dimming the lights, which are otherwise bright and realistic.

Part of the humor stems from watching a convincing portrayal of a woman now in her late 80s talk about sex while using some risqué terms. To O’Sullivan’s credit, her Dr. Ruth isn’t all bright and cheery. She endows her with an indomitable quality and shows hints of vulnerability and emotion.

One of the play’s touching moments comes when she explains how and why she became devoted to helping people with their sex life.

By the play’s end, she’s decided against moving. One might say her decision symbolizes her comfort and contentment with her role as a sex therapist, not wishing to change. In her way, she’s fulfilling the Jewish practice of “Tikkun Olam,” or helping to repair the world. She’s doing so by educating people about sex;  which according to Judaism, is hardly a bad thing, as she explains.

“A million and a half Jewish children died in the Holocaust, but I survived,” she notes. “This is what I’m giving to the world.”

Throughout the play, Adler uses music (coordinated by Corey) to enhance mood. The playing of the Israeli national anthem adds a sense of hope and triumph to one of the play’s most powerful lines.

Before she utters it, she looks at a picture of her grandchildren.

“When I look at them I know Hitler lost and I won,” she says.