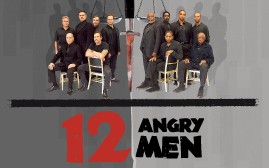 Television and screenwriters like Reginald Rose, Paddy Chayefsky, and Rod Serling were the people’s playwrights during the golden age of American television – the 1950’s and ‘60’s.  These writers were in the vanguard of what would later be labeled as the “kitchen sink” school of television writing and programming.  They had the gift of capturing dialogue in the vernacular of the common man.  Their stories and style became a staple of TV fare during the early days of live television.

“12 Angry Men” debuted in 1954 on a weekly TV show called “Studio One”. Rose’s splendidly crafted script has since been produced by hundreds of Regional and community theatres all across the country.   It’s a timeless story that still resonates with audiences  – fifty-nine years later.

The play in short, is set in  “Then… and Now” (so labeled because America’s racial history has changed very little from back then to now) and revolves around a 12-man jury deliberating a murder case in which a young black teenager is accused of killing his abusive father.  Eleven jurors are convinced the young man is guilty based on seemingly overwhelming evidence presented by the prosecution.   The twelfth juror, however, has no doubt as to the boy’s innocence.  The meat and power of the play’s resolution comes down to how one juror convinces the other eleven that his “not guilty” position is the just and correct verdict the remaining eleven must come to realize as well, and render a unanimous “not guilty” verdict.

Sheldon Epps is a director with a strong personal vision, and he’s been on the mark, more times than he’s missed it.  In selecting “12 Angry Men”, a play with twelve white characters, he challenges the audience to accept six black actors playing roles written for white characters.  With a tweak here and a word or phrase there, he pulls off the effort without destroying the dramatic intentions of playwright Rose.  Not an easy feat.  In the case of this revival Epps asks us to accept the relevance that his more modern version presents.  Besides, American society of the 21st Century looks a lot more like the jury we see on the stage. The larger question then becomes… have we as a society learned anything about racial inequality from “Then…and Now”?

The passion and frustration of these twelve men trying to do their job is not diminished a wit be they black or white.  They still must face the reality of their personal biases and prejudices.   The beauty of Rose’s iconic social-drama script is in the rich density and insight of the writing, which greatly benefits from Epps’ deft direction.  He gets an A+ for his creative staging and traffic-management skills.  Actors love to get their teeth, talent, and intelligence into such scripts and productions and then let ‘er rip.  It’s exciting stuff to watch

This production is a true ensemble effort. Everyone stays on stage.  No one leaves until the stunning Act One curtain comes down and the actors are seen frozen in a tableau worthy of a scene from The Pageant of the Masters.   Having said that, there are always parts that are more inherently showy which allow for more shading and nuance to be added to the entire tapestry.  And that’s the case here: Juror Eight (Jason George) has the lead role as the holdout juror who must convince the rest.  It’s a fine performance among many.  Juror Three (Gregory North) a bull of a man, plays the volatile heavy in the play; seething with latent racism and ultimately exploding in a confrontation with his fellow jurors.  The Foreman (Scott Lowell) does his best to keep the proceedings moving along, and at the same time referee the discussions between the jurors.  Juror Ten (Bradford Tatum) is a tattooed, rough looking dude who looks and acts like he would rather be riding his Harley instead of being sequestered in a jury room discussing the fate of some young black teenager.

America can be a violent country at times.  We are constantly seeking ways to escape the grip of society’s dark side.  Just as Americans are wrestling today with the violence in our streets, schools, and in our homes, the jurors on stage at the Pasadena Playhouse, as well, have their work cut out for them every time the curtain goes up.