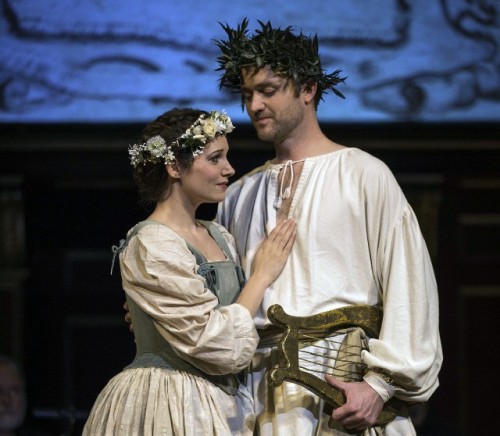 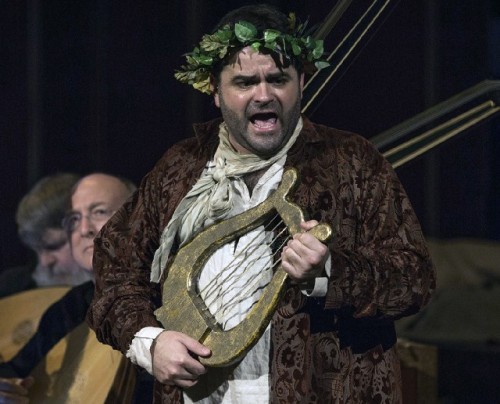 Jason McStoots in an impassioned moment as a shepherd in "Orfeo" 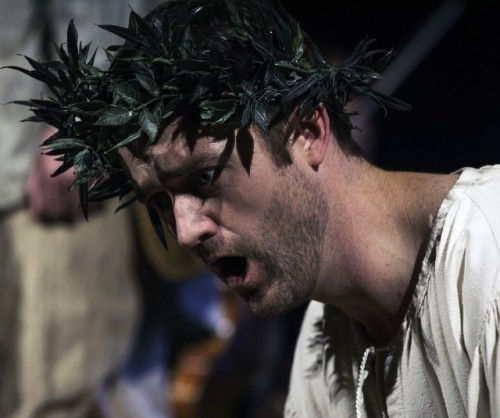 Aaron Sheehan as Orfeo lamenting the death of his beloved Euridice 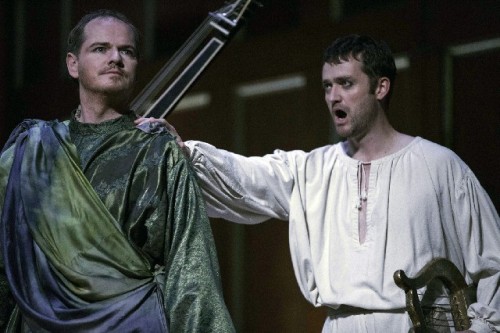 Aaron Sheehan as Orfeo being led to the entrance of Hades by Speranza (Hope), played by Ryland Angel 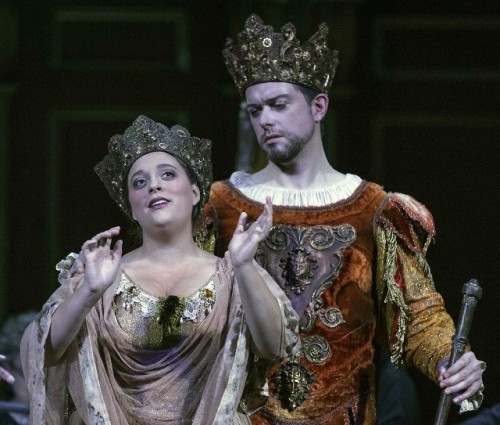 Teresa Wakim as Proserpina and Olivier Laquerre as Pluto 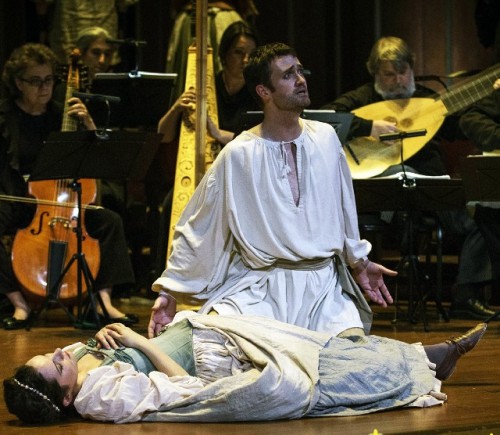 Aaron Sheehan as Orfeo over the dead body of his beloved Euridice (Mireille Asselin). Music director Paul O'Dette on chittarone to right.

The Boston Early Music Festival production of Monteverdi’s “Orfeo” this Thanksgiving weekend was so vital, so young in spirit, so touching in its treatment of timeless human emotion that it is hard to believe that the work is an antique. The first opera to have entered the repertory, it was written in 1607 by Monteverdi for Francesco IV Gonzaga, son of the Duke of Mantua, whose court was a hotbed of advanced ideas about art, when opera itself was a new idea. The genre, which still flourishes, if occasionally on wobbly legs, more than 400 years later, had only been “invented” a decade or so before in Florence, by those same humanists who, attempting to resuscitate Greek art, had created the Renaissance. And God bless ‘em: they gave the gift that keeps on giving.

(A short digression: Today, Mantua is a tourist town; then, the seat of the Gonzaga clan, it was a major center of culture. “Orfeo” was performed for the first time in the ducal palace where Andrea Mantegna had painted “La Camera degli Sposi” for Francesco I Gonzaga 130 years before (1465-74). It is the same palace where Isabella d’Este married Francesco II Gonzaga in 1490. At their wedding, a play by Angelo Poliziano on the theme of Orpheus was produced. Later, Isabella, one of the great cultural patrons of the time, created there her famous studiolo with paintings by Mantegna, Perugino, Lorenzo Costa and Correggio.)

What’s so amazing about “Orfeo” is that Monteverdi, working with few precedents, got just about everything right. He called his work “una favola in musica,” a fable told in music, and that’s what it is. The tale is simple, one everyone at the court of Mantua knew, a tale we all know, the story of the demi-god Orpheus, famed for his talent on the lyre, who goes to Hell and back to save his wife Eurydice from an early death. All goes well until he violates the one requirement placed on him by Pluto, the god of the underworld – to not look back at her until they reach the earth again. Fearful that she is not following him, he does, and Eurydice returns to Pluto’s realm. Orpheus is disconsolate until his father Apollo comes to earth to bring him to the realm of the gods. (There is an alternate ending to the myth in which angry maenads tear Orpheus to pieces because he has renounced the love of woman.)

There are no digressions, no subplots – the story is told as directly as possible. And there are no big-moment arias that in the subsequent development of the genre give divas and divos the opportunity to steal our hearts. But Monteverdi demonstrates that an emotion directly stated in music can be just as powerful.

Monteverdi takes care to flesh the story out, setting the scene in an arcadia inhabited by nymphs and shepherds, among whom the demi-god Orfeo makes his home. The nymphs and shepherds sing and dance, and when the standoffish nymph Euridice agrees to be Orfeo’s bride, they go into overdrive, drinking and flirting and cavorting in a manner appropriate to a demi-god’s imminent betrothal. But when a snake bites Euridice, poisoning her with its venom, they mourn with a grief that is out-matched only by Orfeo’s own. The story, the fable, follows a simple three-part development from joy to sorrow to a bittersweet joy that is wiser because it has been touched by sorrow. It delivers a simple moral that the moment of greatest joy we experience in life can be followed without warning, with no reason, by the greatest sorrow.

And in a production as close to flawless as that given by the BEMF, we hang on every emotional turn. When the chorus joyously sings, “Leave the mountains,/Leave the fountains,/Lovely and joyful Nymphs./And in these meadows/To the traditional dances/Let your fair feet rejoice,” we want to get up and dance and sing with them. And then, just moments later, when Orfeo sings his great lament, “Tu sei morta” (You are dead, my life, and I still breathe?/You are gone from me/Never to return, and I should remain?) we want to double over with grief and mourn with him. (In the BEMF production, the cast expresses its grief so dramatically, I was reminded of the little angels in Giotto’s “Lamentation” who cry disconsolately at Christ’s death.)

Although “Orfeo” was his first opera, Monteverdi had an innate sense of drama. He chose a simply dramatic story to set, and his music in its variety of form and mood, added to the drama. It opens with a toccata of trumpets that alerts any chatty courtier that it is time to be quiet and pay attention. It is followed by a lovely orchestral prelude in the strings, a ritornello, that returns throughout the work, representing the power of music. A singer, the representation of music, praises the prince and sets the stage for the story, a lone shepherd sings, followed by a chorus, followed by a lone nymph, again followed by a chorus until finally the two principal characters arrive on the scene. And so it goes until a final chorus after a ravishing duet between Orfeo and Apollo, an endless series of alternations.

True, it doesn’t sound like much compared to the big 19th century operas that define the genre to the contemporary audience.

But this is where we in Boston are lucky: in its BEMF Vocal Ensemble, which stars during its annual Thanksgiving weekend “chamber opera” series, the BEMF has assembled a group of young singers who have worked together over the past few years in a number of productions, who know the music, the correct style it requires, and, most importantly, know each other, so they interact with natural familiarity - and a sense of fun. Under the guidance of early music veterans Paul O’Dette and Stephen Stubbs and their BEMF Chamber Ensemble (augmented here by the horns of the Concerto Palatino), they have the support of musicians who live and breathe early music. And with Gilbert Blin as stage director and Anna Watkins as costume designer, they transform the Jordan Hall stage into the greatest opera house in the world.

It really is a miracle.

I don’t think that maestros O’Dette and Stubbs would object if I gave greatest praise to their cast of singers, however.

As Orfeo, Aaron Sheehan sang the role of lifetime. Tall, handsome, noble in bearing, he was exultant in joy and devastating in grief. A fellow among his shepherd friends, he glowed with happiness during the festivities preceding his nuptials. In a spirited country dance, the shepherds circle him, one of them poking him lovingly on the shoulder. With his sweet tenor, Sheehan recalls his sadness not long before of having his love rejected, “Do you remember, O shady groves,/My long and harsh torments/…..I lived then in sadness and sorrow/Now I rejoice, and those torments/That I suffered for so long/Make my present happiness much dearer.”

When he sings, on a raised platform at the back of the stage, Euridice, accompanied by the nymph Silvia, is bit by the snake and dies. When Silvia, a powerful Shannon Mercer, announces the sad news in the emotionally devastating aria, “Ahi, caso acerbo” (Ah, bitter fate), Sheehan falls to the ground, his head hanging in remorse, and sings the heart-rending aria, “Tu sei morta,” with as much depth of feeling as moments before he sang ringingly of his joy.

One could go on. In every case, Sheehan set a standard for exposed emotional singing. In his confrontation with Charon (Carontes), who refuses to row him across the river Styx to Hades, Sheehan masterfully assays a stuttering aria – a type of aria that was popular in the early 17th century that fell out of favor for more legato styles. In the scena between Orfeo and Carontes, Monteverdi exploited the various sounds of instruments with voice  – one by one, chittarone (an early guitar), violin, harp, organ, cornetto - accompany Orfeo’s bargaining.

In terms of beauty of voice, Sheehan was matched by bass-baritone Douglas Williams as Charon, whose low, resonant but fluent voice sent shivers up the spine. It would indeed take a demi-god to get past him. As La Musica and Euridice, Mireille Asselin sang with a sweet and light soprano. As mentioned, as the messenger of bad news, Silvia, soprano Shannon Mercer sang with chilling effect. Among the shepherds, tenor Jason McStoots sang with beautiful tone and declaimed the text with extraordinary enunciation. As a shepherd, tenor Charles Blandy sang expressively especially at the end of the first act in a touching duet with McStoots. As a nymph and Proserpina Teresa Wakim brought her expected sensitive soprano to the roles, although her aria advocating for Euridice’s release to Orfeo was a little underpowered. As Pluto, bass-baritone Olivier Laquerre lacked the gravitas the role asked for. As Speranza (Hope), countertenor Ryland Angel was the one major disappointment. His high notes were sweet and clarion, but he sounded insecure through most of his range.

Blin worked his magic in a limited space with limited resources. As Sheehan pleads with Williams to transport him to the underworld, Charon ignores him, going about his business, silently rowing newly dead souls to their fate, a beautiful touch. And the back of the stage miming of Euridice’s death was also a deft detail.

But the unfurling of aphorisms and plot-summaries got to be a little tiring, especially since they were so unnecessary with such a dramatically persuasive cast of singers. In other operas in the BEMF’s “chamber opera” series, the dancing choreographed by Melinda Sullivan and executed by Carlos Fittante often added something, but here it seemed unnecessary since the cast was so adept at movement. Those were two attempts at gilding the lily that didn’t work – this is one lily that didn’t need gilding.