White on Black Wrapped in Guernica Thrills at the Apollo

The first Carmen would have been too demure for the Apollo stage.

Dancers preparing on the street for the stage performance. 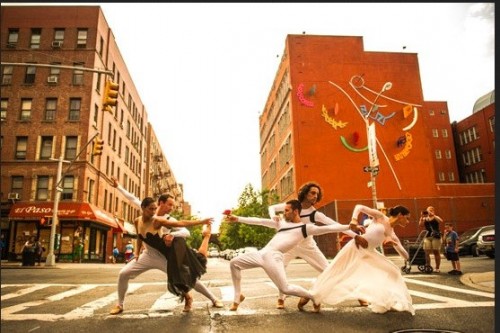 Can they be torn apart? 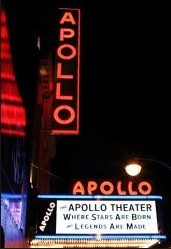 Apollo, a superb setting for Carmen.maquia

Carmen.maquia.  The name sizzles and excites. Everyone who is exposed to this story of a firey woman who puts not love but sexual attraction above all else falls for the lady.  Don Jose, a corporal in the military, is committed to Michaela. When the gypsy Carmen enters the scene he is unable to resist.

Ballerina Maya Pilsetskaya had begged Shostakovich to adapt Bizet for the dance, but ended up with her husband, Rodion Shchedin taking hold and emphasizing the percussion.  Cuban choreorapher Alberto Alonso did a version using Shchedin's edition in 1967.

Does Carmen use Don Jose as her get out of jail card? In any case, he deserts his military role and Micaela to join Carmen in a den of thieves. Carmen meets Escamillo, a handsome, virile toreador and off she goes to a toreador.

Now Ballet Hispanica has choreographed the tale to a special edition of Bizet’s driven, exuberant music.

The production is irresistible.

Shocking at first in white, the prison guards and cigarette girls swirl around the stage, displaying their wide-ranging emotional repertoire in foot and hand motions as well as the more conventional relevés and leaps.

Carmen enters, of course in black. The costumes are seductive, many of the girls are in strapless dresses with sheer chiffon swiring around their thighs. Nude body covers hide the fact that the girls are actually dressed.

Michaela, the long-suffering promised fiancé of Don Jose waits for him. He is distracted by Carmen, and forced to incarcerate her when she starts a cat fight.

The cat fight in which Carmen and her adversary actually hiss and spit at each other is thrilling. The dancers are not mute. They can claw and kick.

Individual duets, solos and group pieces are often surprising and always thrill. The arc of the story, a rectangle of relationships between Don Jose, Michaela, Carmen and Escamillo is not so clearly drawn. The best development was a scene between Michaela, Don Jose and Carmen, in which Michaela forms an empty elipse with her arms as Don Jose slips away, unable to resist Carmen’s sensual attractions.

The den of thieves where Don Jose retreats to join Carmen is somewhat confusing. The reading of the Tarot cards, in which Carmen succumbs to her predicted fate are not clear. Carmenn’s ground groveling as she reads the cards is confusing at best.

Drops from the stage ceiling suggest bits of Picasso's Guernica. A bull’s eye here, a female eye there, limbs akimbo.

Rigorous, disciplined, even formal, the dance movement and patterns contained a marvelous swirl of limbs. Limp bodies twisted into impossible question marks and affirmations.  Fluid movements moving as though dance were easy.  Punctuations which drew us into the emotional hothouse of Spain: a cigarette factory, a guardhouse, a den of thieves and a bullfight.  Hot stuff performed with heat.  The Ballet Hispanico troupe is terrific.