Peter Dean: Life on the Edge of the World 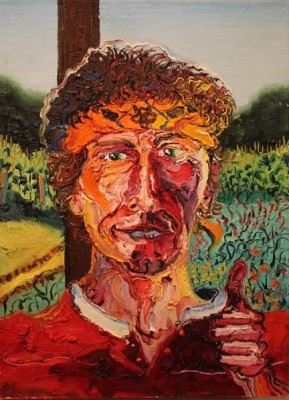 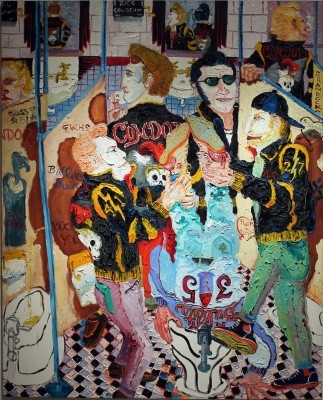 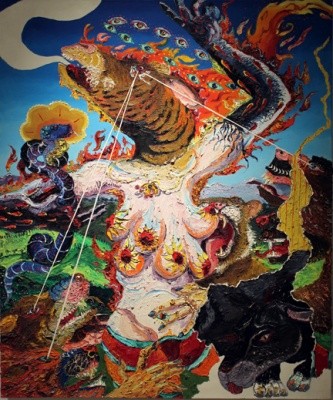 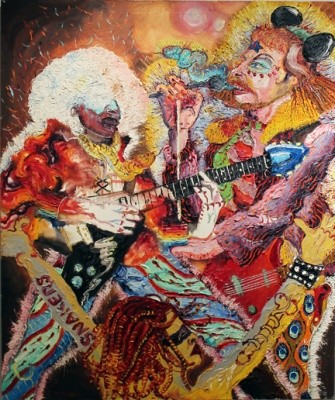 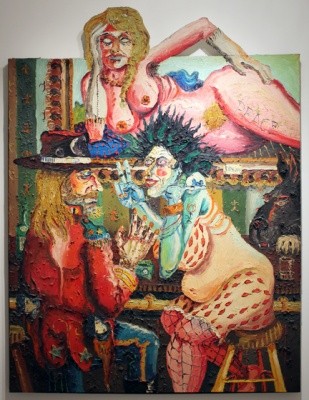 Peter Dean was born in 1934 to Jewish parents in Berlin, Germany, when the rising Nazi movement was victimizing German Jews. Dean and his family immigrated to the United States in 1938, and he grew up in the Bronx. He later attended the University of Wisconsin, graduating in 1956 with a degree in Geology. He worked at the Anaconda Copper Company in Brazil, Montana while following his passion for painting during his free time. Dean would continue to balance these two interests until he could afford to devote himself full-time to his art. He returned to New York City in 1962 and had his first solo show the following year at Aspects Gallery on East 10th Street.

In 1965, Dean became a co-founder of the short-lived “Torque” group, which included sculptor Joseph Kurhajec and painters Peter Saul, and Leon Golub. The group attracted the attention of certain critics, including Lawrence Alloway, and they tried to put together shows in various venues around the country, but quickly disbanded. As Dean stated, “We were maniacs in the midst of Minimalism.” Dean was also a founding member of the much longer lasting Rhino Horn Group in 1969 along with Benny Andrews, Ken Bowman, Michael Fauerbach, Jay Milder, Peter Passuntino, and Nicholas Sperakis. Later key additional members included Leonel Góngora, June Leaf, and Bill Barrell.

Dean and Barrell, were included in the groundbreaking group show The Visionaries, an exhibition on Psychedelic art at the East Hampton Gallery in 1967. Charles Giuliano curated the exhibition.

Wiegand was an outspoken member of the arts community with an eye for the grotesque and banality in contemporary art, which earned him the nickname Godfather of the Ugly.

Marcia Tucker, the influential founding director of the New Museum of Contemporary Art in New York City, was another of Dean’s prominent supporters. She included Dean’s work in a show co-organized by Lynn Gumpert, Ned Rifkin at the U.S. Pavilion, 41st Venice Biennale (1984). The exhibition was titled Paradise Lost/Paradise Regained: American Visions of the New Decade. A retrospective of Dean's work was held at the Alternative Museum in New York City in 1990.

Allan Frumkin had an aptitude for showing figurative artists who were creating work outside of the mainstream artistic movements. He promoted a diverse group of artists including Peter Saul, June Leaf, Paul Georges, Robert Arneson, Jack Beal, and H.C. Westermann. Dean had a solo show at the Frumkin-Struve gallery in Chicago in 1984. Three decades later things have come full circle with an outstanding exhibition of seven large-scale paintings from the mid-1970s to the late 1980s.

Dean’s paintings are rife with political and social connotations as well as his free play within the realm of phantasmagoria. He used political and social satire, irony, and fantasy to create mythical and surreal compositions. Dean created fantastic landscapes that conflated reality with his dream world. His socio-conscious narratives often referenced popular culture, past history, mythology and folklore, and current events. In this exhibition themes and subject matter ranges from historical references such as Peace (1975), and Condor Flush (n.d), to the mythical visionary worlds in Crazy Dance at the Crack of Reality (1975), and Hounded (1977); all of which accumulate in the mind’s eye. As Dean described his work in the inaugural Rhino Horn manifesto:

"I am of the future but [I] worship an ancient god. I am a magician who transforms the images of our times into painting. I interpret reality into fantasy and back again. I’m a juggler of color and textures. I’m a seer of the past and a prophet of the future. I ride the hurricane. I walk on the tightrope of sanity. I live on the edge of the world."

Using thick application of oil paint on canvas, Dean conveyed bold expressive emotion using a rich, heavy impasto technique to construct flamboyantly burlesque depictions of the dark side of contemporary life such as The Assassination of Malcolm X (1981). His sociopolitical paintings lampooned Western history and contemporary societal issues such as war, xenophobia, genocide of indigenous peoples, and political greed and corruption.

In what Robert P. Eustace, a contemporary artist who was influenced by Dean, has described as wildly magical panoramic scenes from the bizarre carnival pageant and fantastic drama of life, Dean presented deliberately shocking and grotesque images that offered alternative scenarios to the distortions and myths of the mainstream news and popular culture.