After the Queen Dies 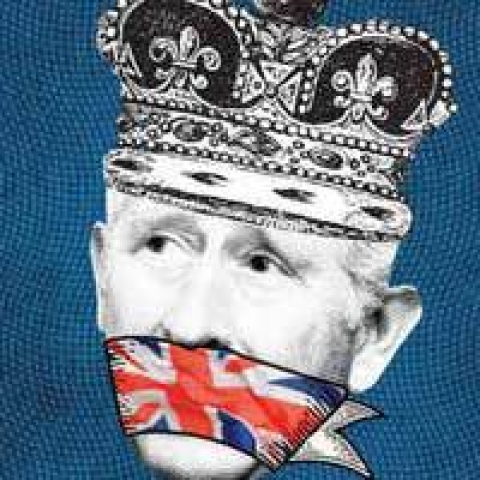 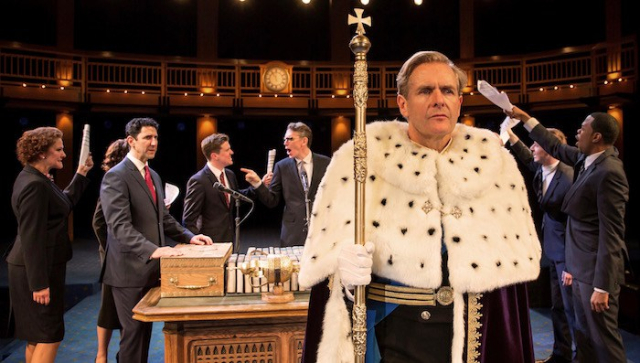 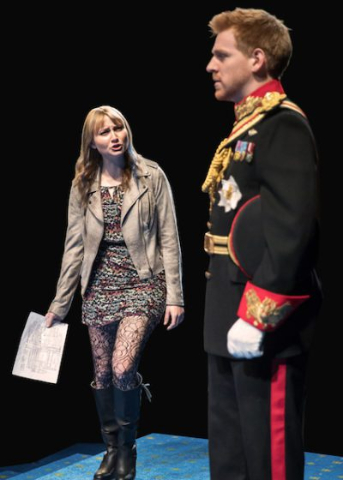 Rae Gray and Alex Manley Wilson as Jess and Harry.

In King Charles III, Chicago Shakespeare stages a story of future history. Queen Elizabeth has just died and, finally, Prince Charles will come in to his own as King Charles III. But an unruly Parliament and his two sons intervene to change the course of that history.

The drama was written by the highly regarded British playwright Mike Bartlett, is not just an amusing evening of theater, as publicity might lead you to think. The crowned and gagged head that looks amazingly like the real-life Prince Charles gazes at us with a quizzical expression, as if to say, how did I get here?

This is a thoughtful drama (with comic lines) about the nature of law and constitutionality and father-son relationships. Director Gary Griffin takes Bartlett’s carefully shaped story and brings out its drama, compassion and relevance to the day’s events. The 2.5 hour play will leave you with plenty to discuss about leadership and democracy.

It opens as Queen Elizabeth’s funeral ends. Charles (English actor Robert Bathurst) and Camilla (Kate Skinner) are alone and she solicitously talks to Charles about his reaction to his mother’s death and his role. Prince William and Kate arrive (Jordan Dean and Amanda Drinkall), but both assume Charles will be king at the time of coronation in three months. Camilla advises them that he is king now, not because of any constitution (of which England has none), but tradition.

Tradition holds that on the death of kings
Or Queens, the next is monarch straight away.
He needs no proclamation, needs no man
To shout the queen is dead long live the king.
Your father ruled the moment granny passed.

Prince Harry (Alec Manley Wilson) is not happy about participating in the royal pageantry and informs his family that he’s leaving. In a later scene, Harry is with friends at a club and meets Jess, a young woman with charm and spirit (played by Rae Gray). Harry is smitten.

When Evans, the prime minister (Sean Fortunato), and the king hold their first meeting, the PM offers what he thinks will be the usual superficial overview of pending legislation. All new laws must be signed by the monarch; this has been a routine matter. When Charles learns of the new bill in Parliament that will severely restrict press freedom, he considers this to be bad legislation, despite his many conflicts with the English news media. After some waffling, he announces that he will not give royal assent—an unheard of occurrence and the one that sets the stage for the chaos to follow.

Charles also decides that he will regularly meet with the leader of the opposition (David Lively), which the PM finds unusual. (“Your mother never felt the need…”)

Bartlett seems to have written Charles’ character using insights from some of his actual actions and positions and may be giving us a glimpse of who Charles the monarch might be—should he ever have the chance to reign.

Kate’s comments in her opening scene give a slight hint at how she will behave in the future, as she prods William to action. Although the play resolves around the three royal males, it’s notable for the three strong women portrayed. Camilla is loving but protective. And Jess, a smart and savvy commoner, clearly knows her own mind when it comes to making love connections. (She also shows the English veneration of royalty when she first meets Charles.) Drinkall, Skinner and Gray excel in these roles.

The entire cast is well up to Chicago Shakespeare’s standards. Bathurst is dignified, occasionally hesitant and strongly sympathetic as Charles. Wilson is dynamic as Harry, who is torn between his royal family and heritage and his desire to live a normal life outside the palace sphere. Dean is a strong elder son. The three actors create the dramatic father–son story, with the sons conflicted between loyalty and love for their father and loyalty to the crown.

Bartlett’s script is written in stylish and slightly vernacular blank verse, which adds a level of gravitas to the proceedings. Kathryn Walsh did an excellent job as verse coach. The entire cast handles the blank verse capably although there are some inconsistencies in the British accent, despite Eve Breneman’s dialect coaching.

Scott Davis’ simply designed set makes the action work beautifully on Shakespeare’s thrust stage. His subterranean platform raises and lowers as needed to bring the Queen’s coffin, palace sitting rooms, meeting rooms and offices to the performance level. The sound design by Rob Milburn and Michael Bodeen is never intrusive, but I particularly liked the music at moments of drama and stress, which echoes the first few measures of The Clash’s iconic “London Calling.”

Mike Bartlett has written extensively for film, TV and radio as well as theater. He’s probably best known for My Child (2007) and Love, Love, Love (2010). His play Cock was produced in 2014 at the former Profiles Theatre in Chicago. King Charles III premiered in London in 2014 and moved to Broadway in 2015. It won the Olivier Award in 2015 for Best New Play.

King Charles III continues at Chicago Shakespeare Theater on Navy Pier through January 15. Performances are Tuesday-Sunday with two shows on weekend days. Tickets are $48-88 and can be purchased online or by calling 312-595-5600.