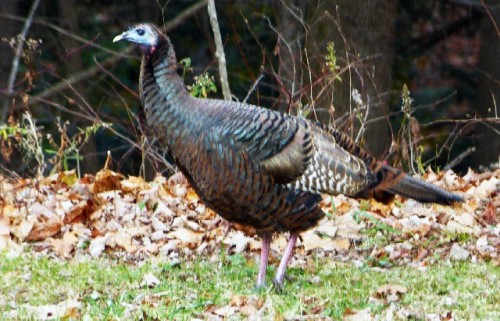 The turkey in our back yard evoked thoughts about the first Thanksgiving. 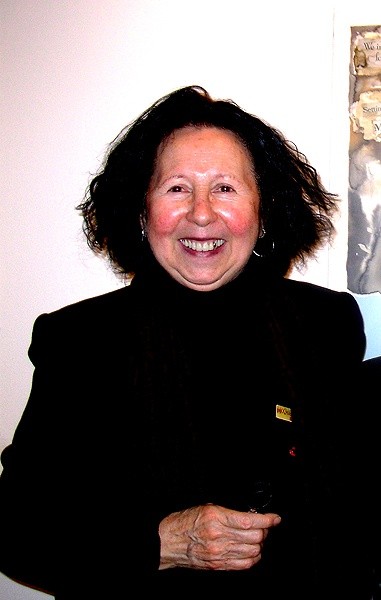 The renowned artist Jaune Quick to See Smith comments on the presence of First Nation peoples in our community. Giuliano photo.,

Friends, family and loved ones,
The other day I spotted a big tom turkey in the back yard near the woods.
He seemed to have a bad leg and limped.
Now and then we spot a flock, usually around this time of year, but it is unusual to see a single turkey.
I shot him with my camera.
For the first Thanskgiving it would have been an arrow.
Brought to the feast by Natives who helped the Pilgrims to survive that first harsh winter at Plymouth Plantation.
They sat as brothers to celebrate a harvest and prepare for a harsh winter.
Now there are few if any Native Americans in this region.
So there is an irony to this fellowship we celebrate.
Particularly now during a time of hardship for most Americans.
While the young fight in foreign wars to preserve our freedom.
Friends of our generation struggle.
Golden Years are tarnished by hardships and uncertainty.
We closely survived the threats of Romney/ Ryan and their support for the one percent.
Some of you believed in and voted for them and Scott Brown.
It is the right and privilege of Americans to have different social and political views.
Few of us are simply and stridently blue or red.
There are many shades, hues, and textures comprising an American rainbow.
"If you prick us, do we not bleed? if you tickle us, do we not laugh? if you poison us, do we not die? and if you wrong us, shall we not revenge? If we are like you in the rest, we will resemble you in that." Merchant of Venice.
A narrow victory for more liberal views is no sure recipe for success in the next four years.
The struggle will prevail as we hope for common sense in a deeply divided Congress.
Looking into the crystal ball there are few is any easy answers and facile hopes for the future.
As a friend my age put it aptly we may well have lived through America's greatest years.
It is doubtful that we will be as productive, prosperous, powerful and influential as we have been.
History informs us that there are cycles to Empires.
It is foolish and imprudent to think otherwise.
In particular let us stand by those who are suffering through health and financial adversities.
Struggling to survive, with a roof over their heads, and food on the table.
The feast we share is a chance to pause and embrace.
To give thanks in the sharing of abundance and good cheer.
Bracing for the hard winters and tough seasons that lay ahead.
Best wishes
Charles and Astrid
Dear Charles and Astrid,
I agree with most of your Thanksgiving letter. However, I need to add a plug for Native America. You may not be aware of their presence in your community but believe me they are there. Oh they may be called Mexicanos, Chilean, Guatemalan, etc. but American Indians reside everywhere in the shadows. You see, our old legends on this continent--(before there were political borders, we were all connected through our great trade routes)--say that after the white eyes come and ravage everything and cause the greatest genocide the world has ever known (still going on in our southern border), that American Indians will once again cover the continent.
So in the backs of the restaurants in your town, there are Indian men cooking, washing dishes and serving food. In the hotels near you, often the beds are being made, the floors are being swept and the toilets are being cleaned by Indian women. In the rich people's homes often the nannies rocking the babies to sleep with Spanish lullabies or maybe Mixtec or Nahuatl lullabies, are perhaps Indian women.
The Latinos may have African blood, the blood of slaves, and likely Indian blood as well, but the Mextecas, the Chicanos, the Hispanics, the Mexicanos--whatever they are called, are all American Indians. We here in the U.S. generally have relatives across both borders, I have Cree, Metis from Canada and Aztec from Mexico as well as Salish and Sho-Ban. We are all related in the Americas, no matter how we are called, no matter whether we were raped and carry other bloods, we generally identify with our Native roots.
The government wants to make Indians Aliens, Foreigners, Immigrants (that's a laugh, oh really, Immigrants) but you know what, whether we speak Navajo, English, Nahuatl, Spanish, French, Yupik, Salish, Quiche or Spanglish, we are the Real People, the First Peoples, the Only Ones, the Original Peoples, the Human Beings, We, the People. This is how we all call ourselves in our original languages.
Yes, "We the People of the United States, in Order to form a more perfect Union, establish Justice... " ESTABLISH JUSTICE--HA!-- the preamble to the Constitution was taken from our tribes by Benjamin Franklin who served as an Indian agent in one of his many jobs.
Happy Turkey Day everyone and in your dinner table prayers, please offer up one for the blood bath on our southern border, some of our American Indians are being shot 24 by 7 for sport by white militia protecting us from "Immigrants and Aliens."