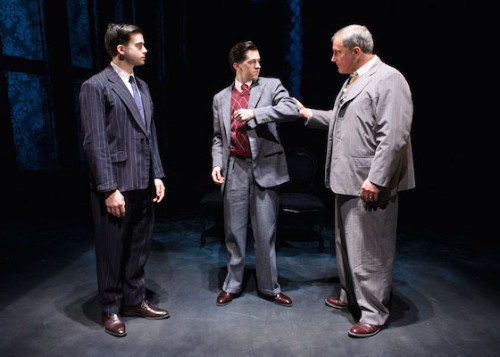 If you grew up in Chicago, the story of the senseless murder of young Bobby Franks by Leopold and Loeb was a nightmare for parents. The story still resonated, no matter how much it faded into the past.

These two young college students had adopted an attitude of superiority over the common people, a feeling that they were "übermensch" or supermen, no doubt caused by too much reading of Nietzsche. Thus they could randomly choose and murder a child in their wealthy Kenwood neighborhood and believe they would never be caught. Unfortunately, one of the übermenschen dropped his glasses at the murder site and gave the police a critical clue.

Never the Sinner is the story of the 1924 "crime of the century," its prelude, publicity and trial aftermath. It's retold in a tightly woven and acted play at Victory Gardens Theater. The script by Chicago native John Logan, written when he was a student at Northwestern University, is directed by Gary Griffin, whose usual métier is musicals. Griffin proves he can direct a perfectly wrought drama with equal skill. The 85-minute drama focuses on the relationship between the two young men. It's tense and thrilling even though the outcome is known from the start.

The time-skipping scenes show us the boys' first meeting, a dance lesson, their sexual relationship, and their detailed planning of the crime. The two actors who play the boys both give terrific performances. Jordan Brodess as Richard Loeb is charming and brash as he is usually described, while Japhet Balaban brings the serious and scholarly Nathan Leopold to life. Keith Kupferer plays legendary lawyer Clarence Darrow, whose defense saved the boys from the death penalty in a non-jury trial. Too bad Kupferer doesn't have more of a chance to show his Darrow chops; his main part is during the trial scenes, where he gives an abbreviated version of Darrow's 12-hour summation, an eloquent argument against capital punishment. Derek Hasenstab is fine as the prosecutor Robert Crowe. Three actors--Bill Bannon, Celeste M. Cooper and Demetrios Troy--round out the cast with their excellent performances as reporters, analysts and friends of the accused.

Kurtis Boetcher's very simple set design, including a small horizontal platform that is raised and lowered, makes beautiful use of Andre Pleuss' projections of Kenwood and other Chicago scenes. A few period chairs are used in different configurations as scenes change. Keith Parham's lighting spotlights the action with sensitivity.

The Leopold-Loeb story has been part of Chicago's popular culture with many artistic renditions and reinterpretations of the story and its characters, both fiction and nonfiction, including a contemporary walking tour focused on the "Crime of the Century: Leopold & Loeb and the Murder of Bobby Franks," offered by the Pocket Guide to Hell reenactment group.

If Leopold and Loeb had received the death penalty, they would have been executed on the hanging gallows in the basement of the 1893 Cook County Criminal Courts Building, which is now a restored office building called Courthouse Place at 54 W. Hubbard St. Images of that Richardsonian Romanesque building were projected during the trial scenes of Never the Sinner. The building was also the setting for The Front Page, Ben Hecht's famous play about Chicago journalism.

Logan's script for Never the Sinner won a Jeff award for new work in 1986. He wrote critically regarded plays such as Hauptmann and Red (the play about painter Mark Rothko) but is probably best known for screenwriting, including scripts for Gladiator (2000) and The Aviator (2004), several Star Trek scripts, plus James Bond films such as Skyfall and Spectre.

Never the Sinner continues at Victory Gardens Theater, 2433 N. Lincoln Ave., through Dec. 6 with performances Tuesdays through Sundays at varying times. Tickets for $15-60 can be purchased online, by emailing tickets@victorygardens.org, or calling 773-871-3000.