Ladykillers Revived in the West End 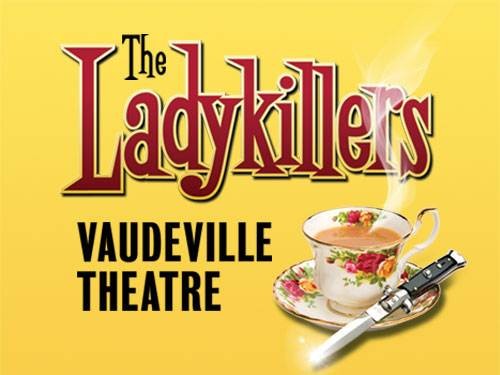 A just completed second run in the West End. 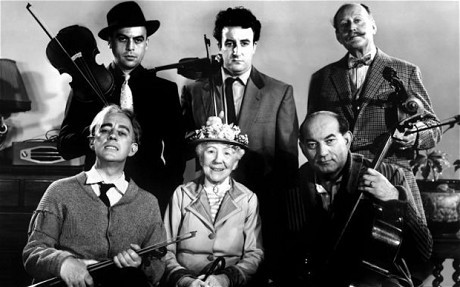 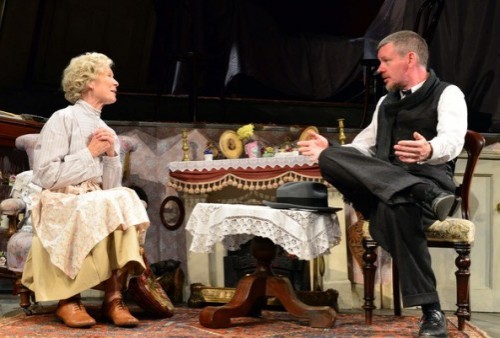 Mrs. Wilberforce and The Professor converse over tea. 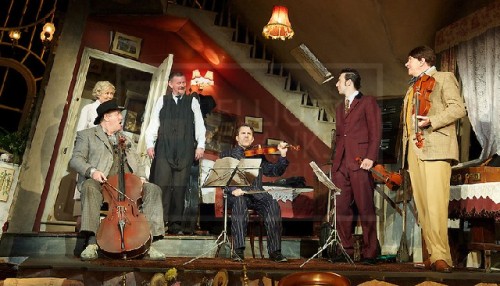 Rehearsing in the cramped attic room. 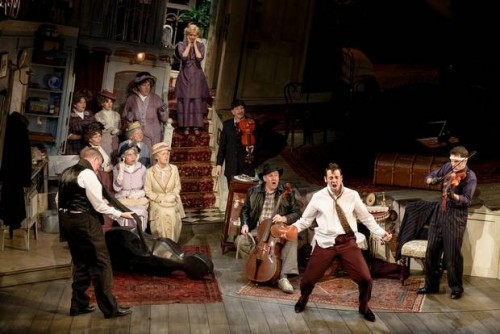 An avant-garde performance for the women. 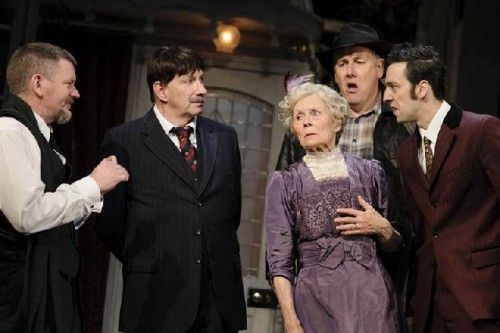 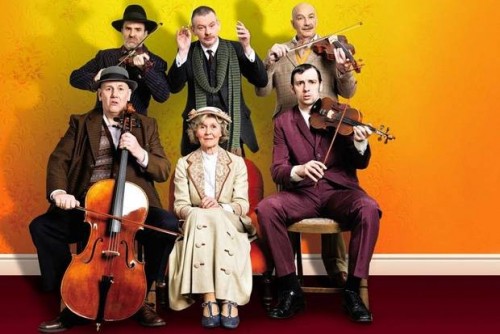 The classic comedy The Ladykillers was released by the renowned Ealing Studios in 1955. As the planner of a heist Professor Marcus, played by Alec Guinness in one of his most memorable roles, headed a stunning cast that included Peter Sellars and Herbert Lam.

For our last night of theatre in London we opted to sit back and laugh during the second run of the play adapted for the stage by the sit-com writer Graham Linehan. This version, with a different cast, completed a national tour and opened in the West End in July. We enjoyed the end of the extended run.

While the production was superb overall, with a terrific and witty cast, the real star of the show was the rickety and oddly configured set by Michael Taylor. The oddities of Mrs. Wilberforce’s (the charming Angela Thorne) falling down ramshackle King’s Cross home was often played for laughs with lots of hilarious physical comedy and pratfalls.

The set was also brilliantly reconfigured to create the exterior when a constable knocks on the door at the beginning of the play, as well as, later to reveal the railroad tunnel when the Professor, the last survivor of the gang, meets his demise.

Like Isadora Duncan he is done in by getting entangled in an absurdly long scarf. It has been a running gag that the dowdy little old lady (the one who has to be killed) keeps stepping on it and tripping him up.

Even after decades of first seeing the film the plot twists were well planted in my memory. So there were no surprises. But we allowed ourselves to be absorbed by the clever staging.

In the film, for example, there are hilarious shots of the Professor and his ever shrinking band of accomplices, dropping bodies off a bridge onto a freight train. Here the director and designer face the challenge of dispatching the corpses.

The great fun of Ladykillers is how the little old lady outwits the professor and his gang of colorful hoods.

Here the elderly Angela Thorne was utterly charming playing the bumbling innocent. She proves to have a multivalent moral compass.

When the Professor rents a room he informs her that his colleagues, a string quartet, will be rehearsing for a concert and are not to be disturbed. They play a 78 to simulate their music making.

With the combination of kindly landlord and busybody she is constantly knocking on the door with tea and biscuits.

The professor is demonstrating the mapping out of the heist on a blackboard. Her arrival causes him to quickly flip it to its musical side. Every time it catches Harry (Ralf Little) on the chin and sends him sprawling. It never fails to get a laugh even when we see it coming.

It seems that Harry is a pill popper seeking the right balance between uppers and downers. When on the reds (speed) he compulsively cleans his violin, furniture, or anything within grasp.

The motley crew each has their own quirks and signifiers. The well mannered Major Courtney (Simon Day) is overly fond of Mrs. Wilberforce’s dresses and unmentionables. The enormous and lovably dim witted One-Round (Chris McCalphy) blurts out the wrong thing at the wrong time. Hilariously he “plays” the cello by sticking it under his chin like a violin. Con O'Neill (Louis) the knife throwing Romanian is played like George Raft on speed.

Early in the first act when the Constable drops by Mrs. Wilberforce, in the mode of “neighborhood watch,” regales him with the suspicious characters and plots that abound on her street. Over a friendly cup of tea there are hints of delusional UFO sightings.

Having “cried wolf” too many times this sets the plate for when, the crooks having all disappeared, she wants to turn over the loot to the constable. With a wink wink he tells her to keep it as it is insured. “That’s just what the Professor told me” she exclaims.

She will use the cello case full of cash to travel to America seeking a miracle cure for her diseased parrot. We never see the bird but it is played for gags.

There are wonderfully charming twists and turns that keep us in stitches.

Somehow she has become implicated as an accomplice in the crime. The Professor leverages this to suggest that she will do hard time unless she plays along. She in turn bargains for the string quartet to play a concert for her women’s group. Half of whom appear to be in drag.

The professor warns that the music will be quite avant-garde. Sawing and hacking away with utter cacophony on their instruments the ladies are delighted by the rare artistic experience.

As the plot thickens it becomes clear that they must indeed become Ladykillers. For this they draw straws but One Round (so named for his brief boxing career) won’t let them harm so much as a single hair on her sweet little head.

The Major gets the short one but, alone with Mrs. Wilberforce and the loot, he stuffs his pockets with cash and slithers out the window and onto the roof. In an ensuing altercation with his mates he is the first to fall off onto the freight train. The rest will soon follow.

Ladykillers did the trick of hilariously wrapping up a great week in the West End.