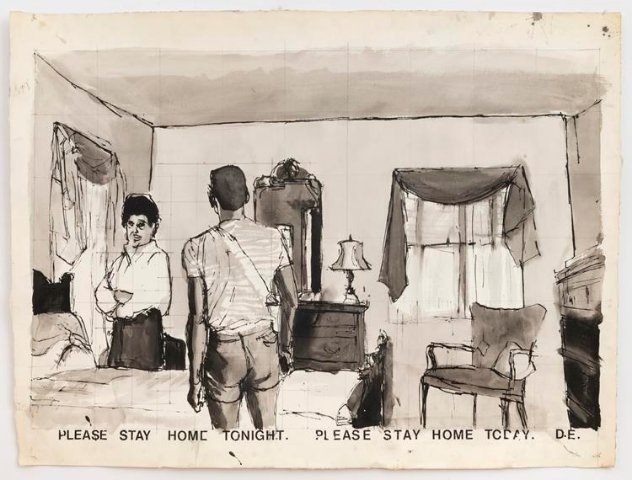 The Carpenter Center for the Visual Arts is pleased to present Please Stay Home, an exhibition featuring the work of Darrel Ellis, Leslie Hewitt, and Wardell Milan. An additional contextual installation will include photographs by the artist’s father, Thomas Ellis, and close friend, artist Allen Frame. Centered on a less recognized body of Ellis’s work and featuring new commissions by Hewitt and Milan, Please Stay Home is guest-curated by Makeda Best, Richard L. Menschel Curator of Photography at the Harvard Art Museum

About the Artists and Curator

Darrel Ellis’s (b. Bronx, 1958–d. New York, 1992) conceptual paintings, photographs and drawings created a new and radical approach to portraiture and photography. Part of an ‘80s art movement in the Bronx where he grew up, Ellis also figured prominently in the downtown New York scene.

Most of Ellis’s work includes his friends, family, and self-portraiture, some made through direct observation, and others filtered through the perspective of other photographers, including, importantly, his father. Ellis never met his father, Thomas Ellis, a studio photographer who captured a lively social scene in Harlem and the South Bronx in the 1950s and left behind an extensive archive of family photographs, which were discovered by Ellis in his early twenties. The elder Ellis was unjustly killed by police two months before his son Darrel was born. Over the next decade, Ellis would allow his father’s work to inform his own.

Early portraits – in multi-media materials on paper, or acrylic on canvas – present intimate, confident, and lively depictions of people Ellis knew well, while later work is increasingly experimental and elegiac and more often employs photography. Near the end of his life, Ellis created self-portraits based on photographs taken by other artists, while also staging pictures of himself enacting reductive stereotypes of a Black man: security guard, beggar, Black Panther. Ellis’s life was cut short by AIDS in 1992 at age 33.

Leslie Hewitt’s (b. 1977, New York, NY) hybrid approach to photography and sculpture revisits the still life genre from a post-minimalist perspective. Her geometric compositions, which she frames and crystallizes through the disciplines of photography and film theory, respectively, are spare assemblages of ordinary effects and materials, suggesting the porosity between intimate and sociopolitical histories. Whether discreetly arranged in layers on wooden planks or stacked before a wall in her studio, Hewitt’s objects often include personal mementos such as family pictures, as well as books and vintage magazines that reference the black literary and popular-culture ephemera of her upbringing. Interested in the mechanisms behind the construction of meaning and memory, she decisively challenges both by unfolding manifestly formal, rather than didactic, connections in her heteroclite juxtapositions. She puts pressure on physical space as the ultimate frame of her photo sculptures by displaying some of them leaning against a wall, as they were originally conceived. Hewitt further works with site-specific installation and film as modalities to contend equally with the notions of space and time.

Wardell Milan’s (b. 1977, Knoxville, Tennessee) practice is conceptually grounded in photography, often using photographs as initial inspiration behind composition of drawings and collages. Referencing artists such as Robert Mapplethorpe, Diane Arbus, Andres Serrano, Alec Soth, and Eugene Richards, Milan appropriates, and in some cases re-appropriates the photographs, and thus the bodies depicted.

Makeda Best is a curator, writer and historian of photography. She currently serves as the Richard L. Menschel Curator of Photography at the Harvard Art Museums. Her exhibitions include: Time is Now – Photography and Social Change in James Baldwin’s America (2018), Crossing Lines, Constructing Home: Displacement and Belonging in Contemporary Art (2019) and Devour the Land: War and American Landscape Photography Since 1970 (2021). With Kevin Moore, she is the co-curator of the FotoFocus 2022 Biennial Exhibition, On the Line: Documents of Risk and Faith. She published Elevate the Masses – Alexander Gardner, Photography and Democracy in Nineteenth Century America in 2020. She was also co-editor of Conflict, Identity and Protest in American Art (2016). Her current book projects explore the intersection between photography, gender, race, labor, and ecological issues. She has contributed to numerous exhibition catalogs and journals. She holds an MFA in studio photography from the California Institute of the Arts and a PhD from Harvard University.

CARPENTER CENTER FOR THE VISUAL ARTS

Free and open to the public, the Carpenter Center for the Visual Arts is the center for contemporary art and artists at Harvard University. Through exhibitions, new commissions, public events, publications, and residencies, the Carpenter Center is dedicated to artist-centered programming and to build- ing a vibrant community around contemporary art. This community is defined by an ethos of experimentation, diverse perspectives, and making connections across disciplines and fields. Housed within Le Corbusier’s only building in North America, the Carpenter Center’s projects are enriched by the educational mission of the Department of Art, Film, and Visual Studies, and the cultural resources of a large research university.