Tamburlaine Today at the Theatre for a New Audience 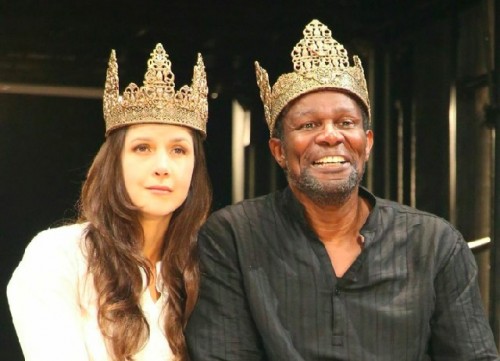 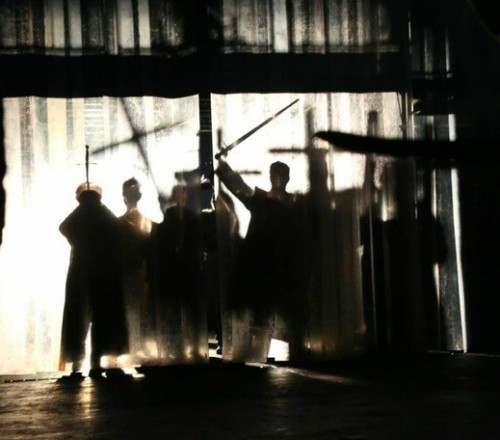 Sets and lighting mesmerize in this production 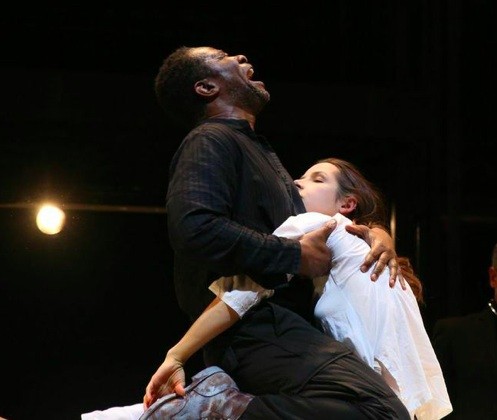 A moment of transfixing grief and desire. 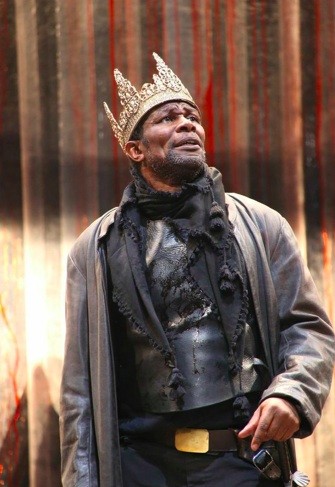 Thompson playing the barbarian can also be sweet. 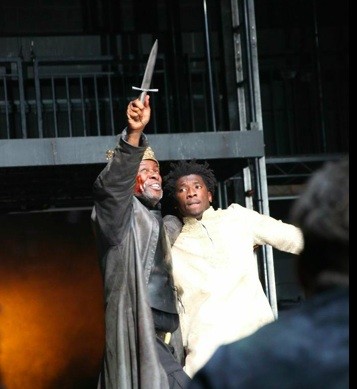 No God can hold back the hand of Tamurlaine. 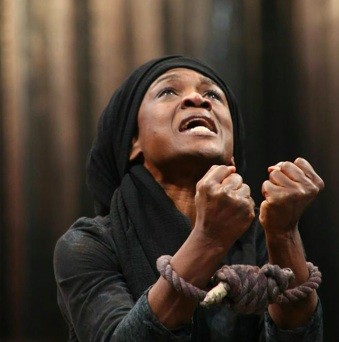 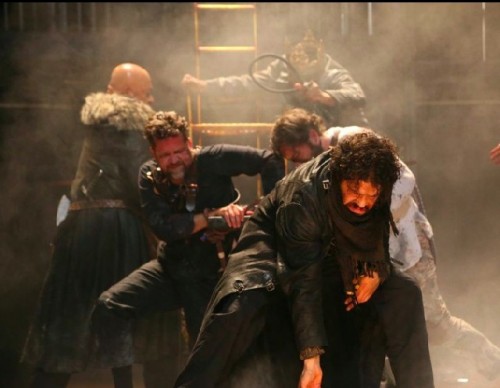 Is this play the history of the MIddle East and Eastern Asia?

The great classical actor John Douglas Thompson takes on Tamburlaine, full of the inevitably ill-fated lust for not just power but dominance. Often lofting luscious words as a huge single spot singles him out, just as he wants it, Thompson is transfixing.

In the plain, tall setting of the Polonsky Shakespeare Center, Thompson’s physical prowess is also on display. He is an actor who with seeming ease marries heart and mind as the command of his vibrating presence captures a myriad of thoughts and desires.

Thompson has remarked that most rulers he has played were born to power. Tamburlaine was not. He started life as a shepherd and followed too much the devices and desires of this passionate quest.

He is talented with a gift of oratory but flawed by all-consuming ambition. Every territory he fixes his eyes on Tamburlaine wants and takes with blood and gore to the beating of the drum.

The music for this production is particularly striking. Fifty percussion instruments are deployed. They punctuate the frequent cries to battle as well as the soft tenderness of love. Arthur Solari both composed and performed the music.

Zenocrate, who Tamburlaine crowns as empress after she demonstrates loyalty, is the woman who bears him three sons. Her death turns Tamburlaine to ever more irrational violence. This moment is seared in the audience as Thompson mounts her while crazed attempting seduction. She is torn from him, an aide repeating over and over that she is dead.

Like Lear’s children, two of Tamburlaine’s try to please their father. The third is his mother’s boy, a lover of peace and beauty. He does not suit his father’s needs. Whoever Tamburlaine’s God may be does not stop his hand on the sacrificial altar.

Three virgins in burkas prostrate themselves before Tamburlaine, reminding us of the promise made to suicide bombers when they embark on a mission.

Patrice Johnson Chevannes as Zabia and the King of Syria shines. Her rich voice wraps around words to make them her own as she tauts herself and strides about, sometimes like a proud lion and sometimes like a slithering snake. In complete command, she matches Thompson phrase for phrase. Her personal dignity contrasts with his complex drive which consumes civilized behavior.

Both these actors have a musician’s sense of tone and phrasing. Gutturals come from deep inside, soft phrases are lofted to the moon. Harsh condemnations sear. Whatever lines are missing from the brilliant percussive music which was designed for this play by Sorsi are shaped by their language.

The sexual relationship between the virginally white Zenocrate, played by Merritt Johnson in a seductive white gown, and Tamburlaine was hot, hot. Marlowe, who was a contemporary of Shakespeare’s inspired some of the Bard’s themes. What we miss sometimes with the post-Victorian whitewashing of Shakespeare is his preoccupation with violence, power and lust; his very sensual, body-driven preoccupation of both men and women. Desdemona is about sex, although you don’t realize it in most contemporary productions.

Michael Boyd captures the sequential action of the play perfectly, hammering home the shepherd who turns emperor. Paul Lazar, in three roles, is always cast as the comic. While he is a delicious performer, the cross character humor does not hold up. Other actors assigned multiple roles fare much better. Saxon Palmer always seems in character and commanding whether he is playing Coaroe or Sigismund, Kind of Hungary or the Governor of Babylon.

The mezzanine and balconies are used effectively to extend the theatre and also to make the audience complicit in the goings on. We are after all sitting still while Syria burns and ISIS take over the Tigris Euphrates.

Each element of the simple set is transfixing. Plastic curtains lit from behind reveal torrents of blood and also white, cleansing rain.

Although Tamurlaine lived in one life span, the time of the play spans his literal past to an invented present. The purpose apparently is to draw us in to comparisons with the present. Barbarians often tackle more civilized nations. Tamurlaine decides to tackle God and fails. We can only hope that their leaders are so consumed by lust for power that they will fail.