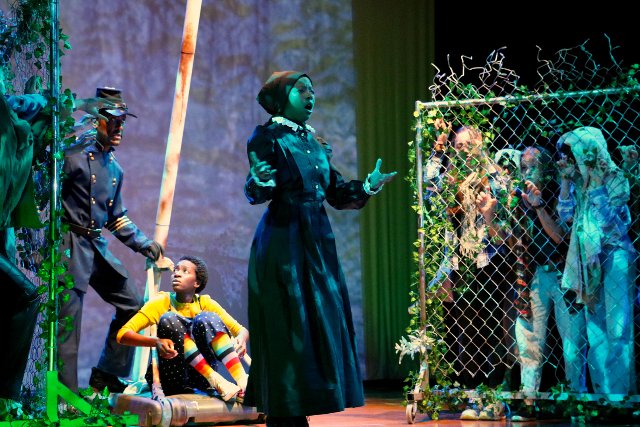 Composer Marcus Shelby is an accomplished artist.  A distinguished bass player, he is well regarded for his compositions for jazz orchestra, most notably “Port Chicago,” “Soul of the Movement: Meditations on Dr. Martin Luther King, Jr.,” and for the oratorio “Harriet Tubman.”  He breaks new ground with a 50-minute, one-act opera that draws on the inspiration of that great Civil War era abolitionist and humanitarian.

Commissioned by Opera Parallèle as part of their Hands-On-Opera program, a series of operas for youth, “Harriet’s Spirit,” is performed appropriately at the Bayview Opera House, which operates as the hub of the San Francisco African American Arts and Culture District.  The production energizes and provides a beacon of hope for the communities that its story represents.

Librettist Roma Olvera has written her third libretto for Hands-On-Opera, but this is her first of wholly original source material.  In this new work, she perceives the intersection of Harriet Tubman’s fight to eliminate slavery with contemporary teenage bullying, which itself symbolizes many ills in society, the first of which is racism.

“Harriet’s Spirit” deals with overcoming fear to stand up for what it right.  As her name suggests, young Modesty is a reserved, bookish teen.  After being taunted and unable to defend herself, Modesty sees a vision of Harriet Tubman who encourages her to be strong and courageous by singing “Do What You Have to Do.”  Yet when a friend is attacked, Modesty still lacks the determination to challenge the bullies.  Another incident occurs, and Modesty finally realizes, through the example of Harriet, that standing up for righteousness is the foundation of love and friendship and the only way to defeat evil.

This opera carries the DNA of an earlier Opera Parallèle production, “Champion,” the first opera by another great jazz artist, Terence Blanchard.  The operas connect through their musical influences and through story lines that speak to the African-American experience.

The narrative in this work is driven by a scintillating, complex, and eclectic score, starting with a striking overture that overlays action on the stage – at first lyrical and bucolic as Modesty reads on a bench, and then ominous as she is taunted by the bullies.  Their powerful, rhythmic stomping and clapping emphasize the threat, reminiscent of gang behavior in “West Side Story.”

The jazz influence comes through in the striking orchestration, with the prominent use of the vibraphone ringing out euphonious jazzy chords and runs.  No doubt, Shelby’s love for the bass violin and its sound results in the frequent double bass thumping in the background and its occasionally acting as lead instrument.  The orchestra is conducted by Nicole Paiement with her characteristic accuracy and decisiveness.

Tiffany Austin, herself a jazz artist, admirably performs Harriet Tubman.  Although not an opera singer, her unamplified warm voice has sufficient strength, and certainly the melodiousness, required for the house.  Her role includes not only bluesy tracts, but encouraged improvisation that occurs in a flashback to Harriet’s lifetime.  Christabel Nunoo is Modesty, whom she aptly portrays as an intimidated and gawky teen.   Her voice, however, is very seriously not teenage.  She possesses fine vibrato, and her top end is very powerful and penetrating.  The two women sing some lovely duets, and both carry an abundance of messages, culminating with Modesty’s anthem “I Will Not Stand Still” and Harriet’s “You’re Meant to Always be Free.”

The third principal is baritone Bradley Kynard, who plays the school janitor in present time and General Montgomery in the flashback.  Although some of his musical lines are at the bottom of his range, he sings those with great professionalism, and he flourishes in his mid and upper range with sonorous tone even in dissonant passages.

The versatile L. Peter Callender, who is an eminent actor and director in the Bay Area theatrical community, undertakes his first opera challenge as stage director.  He transitions with ease, guided by the rhythm of score and libretto as he would be by the language in a play.  Perhaps his greatest accomplishment in this task is successfully shepherding the other collective “character,” the girls in the schoolyard, performed by San Francisco Girl’s Chorus.  Though he can’t take credit for their delightful singing, he guides the novices’ movement and acting, much of which is presumably out of character (they’re probably not bullies in real life!)

Happily, the house was sold out for all three performances, but based on the one I saw, the audience is mostly comprised of the usual suspects – friends and family, company associates, and regular OP patrons.  The Bayview community, and particularly African-Americans, did not seem much represented.  These kind of outreach activities need to reach their target audiences to be effective.

One weakness in the production is the absence of supertitles, which results in much meaning being lost, even for the viewer who has read the synopsis beforehand.   Subject to that correction, “Harriet’s Spirit” should work nicely for its intended audience, and adults should appreciate it as well.