Schumann Featured in The Officer's Room 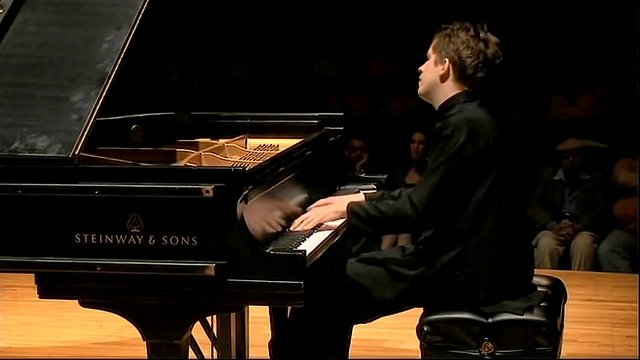 Severin von Eckardstein, the young German pianist, trailing multiple awards, arrived in New York for two concerts featuring Robert Schumann, for whom he has a clear affinity.  If the composer were with us, he would have reciprocated.

Von Eckardstein is a tall, handsome man with big hands, capable of grasping massive chords.  He chooses not to blow dry his hair, or rock to and fro on the piano bench in the style of a divo.  Instead, like his compelling and sensitive contemporary counterparts, Inon Barnatan and Conrad Tao, he is fixed on the music. His performance enchants with his attention to the sounds.  He listens carefully to the keyboard's receipt of his fingers, hearing notes echo through the sounding board, giving the audience a chance to appreciate the overtones.

The sweetness of the soft melodies in the upper register is palpable.  Long melodies drawn forth quietly and with seeming ease are one end of von Eckardstein's spectrum. They are strikingly delicate in contrast with the other end of the pianist's palette, violent passions.

When von Eckardstein wants his notes to forcefully ring out, he listens and responds to the sounding boards' overtones, whether he is playing notes lightly in the melody or crashing down on chords.

Among the orchestra's he has performed with is Dallas, then under the direction of Jaap van Zweden, now Music Director of the New York Philharmonic. This concert in the beautiful Officer's Room of the Thompson Art Center at the Park Avenue Armory is a calling card left for New York.  Surely von Eckardstein will return.

Von Eckardstein likes contemporary music.  He performed a delightful piece by Martin Heckenroder, Paul Klee, Blatt IV.  The pianist alternated between sitting at the keyboard, and standing to pluck the strings of the piano's sounding board.  He drew notes that  suggested Klee's own dots and lines. Klee was a trained musician and his strokes in brush and pen have a musical lilt.

The composer had been attracted to the guitar from childhood. Then, on sleepless nights, he would listen to his father in the living room below playing folk songs on the guitar.  The warmth of this feeling was combined in this performance with the violent tumble of boulders the composer imagines.

A short transcription of the Tristan and Isolde Overture made clear the work's main theme.  It was blended into the Liszt with a breath.  Haunting memories of love pervaded this exceptionally satisfying evening of music in the hands of Severin von Eckardstein.