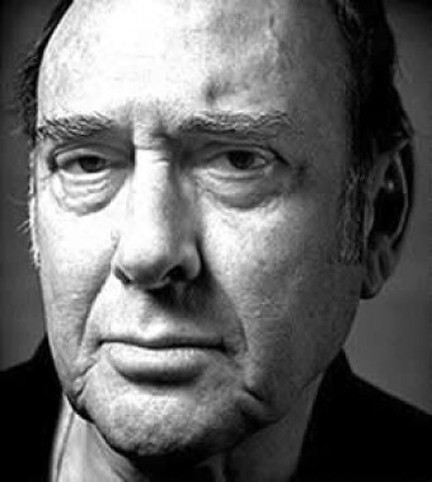 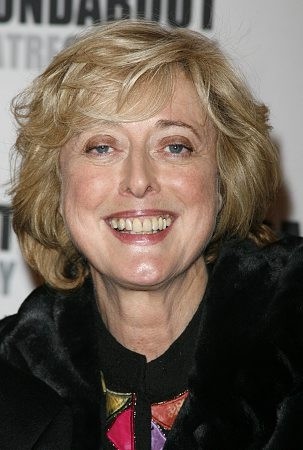 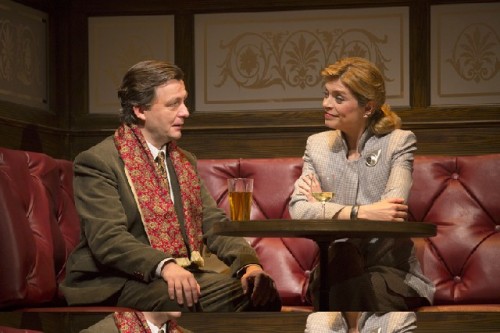 Opening Scene in Pub with Alan Cox as Jerry and Gretchen Egolf as Emma in Harold Pinterâ€™s Betrayal. All Production Photos are by T. Charles Erickson 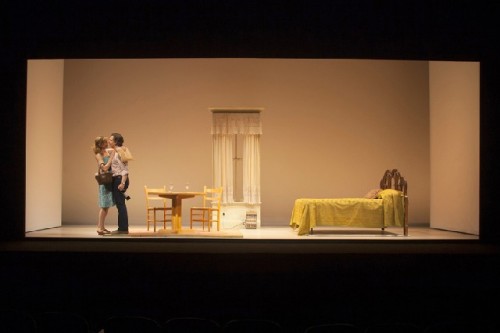 Gretchen Egolf as Emma and Alan Cox as Jerry in their Flat in the early days of their Love Affair. 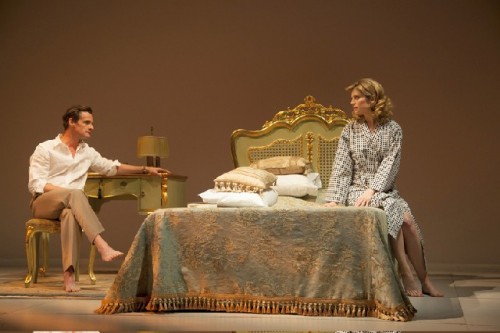 Mark H. Dold as Robert and Gretchen Egolf as Emma in their Venice Hotel Room. 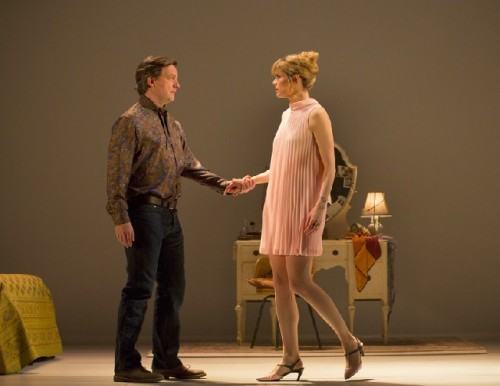 Alan Cox as Jerry and Gretchen Egolf as Emma at Emma and Robert’s 1968 Party. 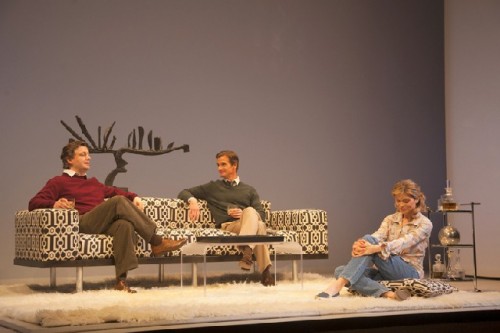 Alan Cox as Jerry, Mark H. Dold as Robert and Gretchen Egolf as Emma in Robert and Emmaâ€™s Elegant Contemporary Living Room in the 1970s.

With sparkling performances and seamless direction, the Huntington Theatre Company's production of Harold Pinter's Betrayal is an intense relationship drama that explores in words and few gestures the complexities of friendship and love, outright and clandestine.

The playright establishes crescendos of intimacy, guilt, and duplicity as he tells the story of an initially passionate, seven-year love affair between Emma and her husband Robert's best friend, Jerry. Beginning with a meeting in a pub in 1977, the couple's affair is reflected at times darkly through a series of fragmented memories.

The first pub scene is set a few years after Emma and Jerry's affair has ended. The drama then moves backward in time to reveal how the relationship flourished and eventually began. Pinter's narrative technique portrays ways in which the couple betrayed their spouses and each other. It also skillfully illustrates how memory and false perception betray the lovers themselves

Harold Pinter’s dramas are ambivalent in their plots, presentation of characters, and endings. They are often minimalist in word and gesture with little action. His stylistic creativity makes him one of the great dramatists of the 20th Century. His works express great power and often acute originality.

Like many of his plays, Betrayal begins with a pair of characters whose rather stereotypical relationship is disrupted by the entrance or involvement of a third character who breaks the often fragile harmony of the other two. The couple's relative stability breaks down (in this case the normal pleasantries of longtime friends) as their fears, jealousies, hatreds (not so much here), and often loneliness emerge. A Pinter hallmark is his use of bizarre yet seemingly commonplace conversation to illuminate this.

Dialogue is of central importance in Pinter’s plays. It is a major aspect of his dramatic originality. “Pinteresque” speech is now a dramaturgical term. It often consists of disjointed and oddly ambivalent conversation that somehow seems normal but clearly is not. Resonating silences punctuate the wordplay and often wordwar.

The playwright crafted characters’ speech, hesitations, and pauses to reveal their own alienation as well as the difficulties they have in communicating their inner and sometimes outer feeling. Pinter layers meaning that can be contained in even the most innocuous statements and verbal repetitions.

All of Pinter's characters' flaws are familiar, at times heart-rendering, and sometimes disturbing. Here, Alan Cox's Jerry is not very admirable as Mark H. Dold's Robert seems less so. While Gretchen Egolf's Emma is the most appealing, none of the characters are really likable. The three actors play them quite well, quite Pinteresque in fact. Gretchen sparkles while Alan and Mark spark.

Maria Aitken's direction is like a great conductor only noticed through the seamlessness of a great performance. Clearly she has a flair for the portrayal of middle class English manners, good and bad.

In this Huntington production of Betrayal, the exquisite sets and lighting act as contextural characters themselves. From the tawdry looking lovers' flat at the end of Jerry and Emma's affair to the elegant 1970s family home living room of Robert and Emma, the furniture and simple accoutrements have dialogue themselves.

Reviewing other Pinter work, my Berkshirefinearts colleague Astrid Hiemer perhaps said it best a few years ago: "One might look at the words and lines (in a Pinter play) as abstract paintings with beautiful brush strokes."

With its exquisitely rendered backgrounds, the Huntington's Betrayal is a magnificent word painting.