Lend Me a Tenor 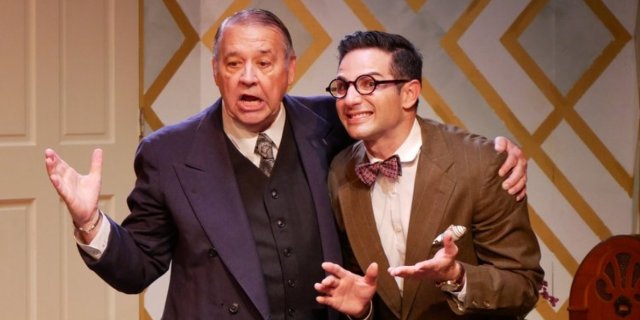 If you are in the mood for a funny, implausible evening out, then Lend Me a Tenor is just what you want. The farce by Ken Ludwig is at MTC in Norwalk through Sunday, Nov. 20.

It is all about misunderstandings, doors slamming, people hiding and chaos.

To quickly summarize the premise of the show; it is the 1930s and the Cleveland Opera is waiting for the great Italian tenor Tito Mirelli to arrive for an evening performance of Pagliacci. Max, the young assistant to the general manager, Henry is charged with picking up Tito at the train station and keeping him away from booze and women. He has a predilection for both. When Tito arrives – with his wife Maria in tow – things begin to go awry. Let’s just say that at some point Maria walks out, Tito accidentally ends up with an overdose of phenobarbital, and everyone thinks he is dead. Someone has to go on in his place. You don’t need to know more to guess the farcical happenings. Add in a soprano  (Diana) who will do anything for her career, Henry’s daughter (Maggie), a singing bellhop and the chairwoman of the board, and the complications multiply.

Kevin Connors has managed to keep the pace fast and the timing almost perfect. That’s a key to effective farce. Too slow and you lose interest. You can’t have time to really think about what is happening.

The set by Sean Sanford offers the hotel suite that Tito will occupy – a sitting room and a bedroom. Besides two doors to the hallway, there are three other doors plus the door between the two rooms. Lots of opportunities for people to hide, leave, reenter, just miss each other and more. The door between the two rooms was cleverly done – allowing the audience to see both rooms simultaneously.

One of the funniest bits is in the second act, were two conversations – in each, the two people are making perfect sense, but each is talking about something totally different. The fact that it all results in double entendres makes it even funnier.

Highlights in the cast include Michael Fasano as Max, the put-upon assistant and Frank Mastrone as the totally perplexed Tito.  Emily Solo is positively seductively predatory as the soprano Diana and Alexandra Fortin as the virginal but panting Maggie is all youthful hero-worship .

Jim Schilling does fine work as Henry, the general manager. The same is true for Jeff Gurner as the bellhop, Cynthia Hannah as Maria and Jo Anne Parady as the board chairlady.

Sit back, relax and get ready to laugh. It’s fun.