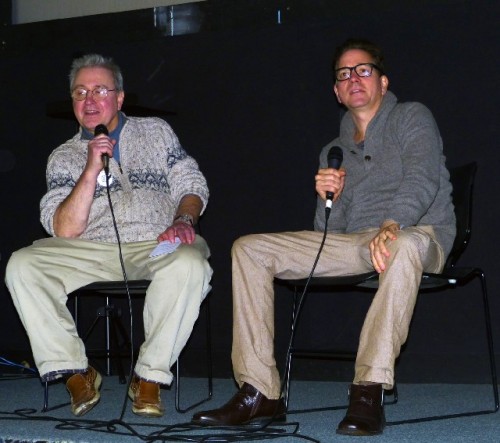 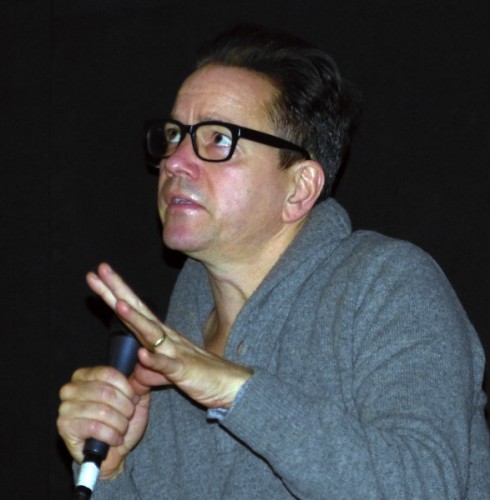 Describing the seven years of obstacles in making the film. 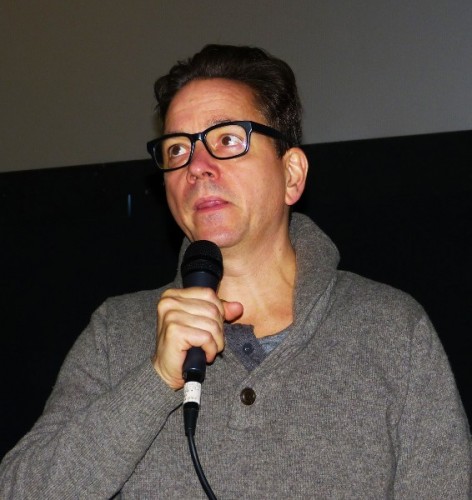 Expanding from career as an actor with supporting roles. 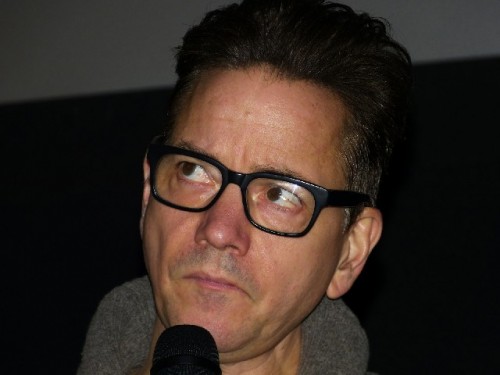 Debra Messing was on the set for two days.

Reggie playing the cello while performing an original composition. 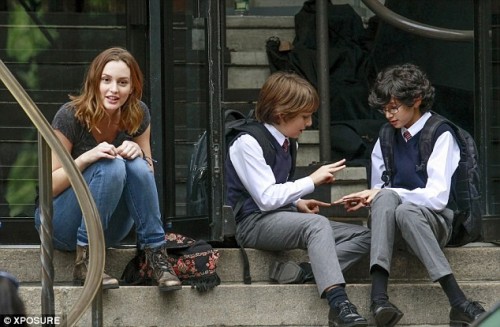 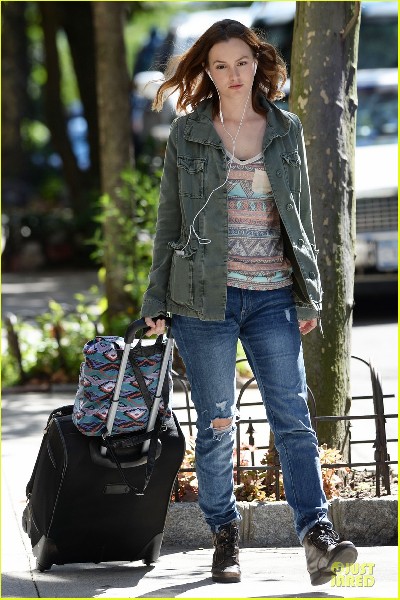 Eleanor desperate and on the street after a breakup with Dennis. 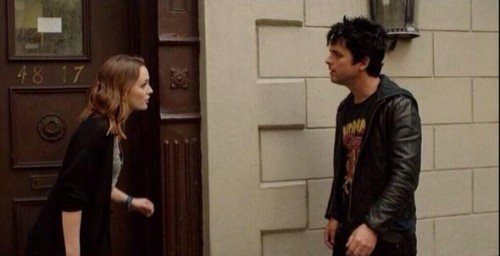 Sharing a meal that Reggie has prepared.

A poignant moment together

It took seven years and twenty days for actor/ writer/ director, Frank Whaley, to create Like Sunday, Like Rain. Screened during the anchor leg of the annual Williamstown Film Festival, which ended yesterday, it proved to be small, understated, absorbing and emotionally devastating.

During a post screening discussion with Steve Lawson, the artistic director of WFF, Whaley, who is best known for being bumped off Biblically in Pulp Fiction, chronicled the many obstacles of developing an under the radar independent film.

He described the formula of current scripts that  are mandated to convey their genre- comedy, drama, action thriller, sci fi- within the first two pages. His project was far more nuanced and when finally made resonates with audiences precisely for its unpredictable and enthralling emotional arc.

In developing the script, which focuses on the two months of a temp job as an au pair Eleanor (Leighton Meester) and the twelve-year-old prodigy Reggie (Julian Shatkin), there were numerous shifts and rewrites. The audience winced when Whaley revealed that in one version they were killed off in a violent end.

Others who liked the script commented that it would be impossible to cast the kid.

Humorously Whaley stated that “We found this forty year old guy who was kind of short to play Reggie. He auditioned in a beard and we had to keep him shaved during the filming.”

That may be an off the wall comment but it captures an aspect of the gifted and mature juvenile actor who on and off screen is wise beyond his years. I asked if in real life he is as smart as his character? The response was that, no, he’s just a regular kid. He is the son of a New York director and father who is a shrink.

With astonishing skill he plays a poor little rich kid who prefers to be alone with books and a cello. Not only is he isolated in an uptown mansion tended to by a housemaid, driver and now a new au pair, but his genius makes him a misfit for the interests and activities of his peer group.

He stares out the window during math class. When the teacher calls on him not only does he answer the complex question but also adds difficult variables. Another academic moment conveys him quoting a long passage from Keats. Or playing cello with a quintet his original composition Like Sunday, Like Rain.

At twelve going on fifty he is a bit young to suffer a Werther syndrome. He tells Eleanor that he is quitting cello. There is no point pursuing an antiquated art form that nobody under 65 gives a fig about.

It's hard to refute his argument.

As Whaley commented it has become de rigueur to cast marquee names in Indy films in order to bring them to market. In this case he pitched to the management of Debra Messing. She was on set for two of the twenty days of shooting. Her character is the authoritarian, super rich/ bitch mother whose style of parenting entails writing checks. Raising Reggie is not a factor interrupting her global lifestyle.

With a bit of luck Whaley was looking to cast the philandering, grubby musician who is messing up Eleanor’s life. Friends advised why don’t you look for a real rock musician? That led to Billie Joe Armstrong the leader of the arena rock mega group Green Day. It seems he was eager to expand his portfolio as an actor.

When the film is released in 2015 surely it will have a potential built in audience for Armstrong’s fans. The role is a cameo in which he is at best credible. On the set he was apparently quite green. Ouch. Forgetting lines and bumbling about. Whaley commented that “I yelled at him a lot.”

In creating this remarkably moving film there were a lot of unknowns and variables that lined up sublimely and serendipitously. We come to really care about the characters and the gentle but sure progression and bonding between Eleanor and her brilliant charge.

It is a bit messy, however, before we get there. Again, as Whaley commented, the film does not reveal its drift and secrets in the first ten minutes. There is an oblique setup as the enraged Eleanor reacts to yet another night when Dennis, whose apartment she has shared for a year, doesn’t come home.

Fed up she packs a single suitcase with her worldly possessions and takes off for work. Before leaving that failed episode of her life she tosses his guitar out the window. That’s like, really pissed off.

Late to work Dennis shows up and makes a scene that gets her fired.

Now homeless with just $150 to her name a friend suggests a temp agency. That very afternoon she is hired as a live in au pair.

The Messing character is anxious to tie up loose ends before taking off. She is more or less a single mom. The identity of the father is vague. He may be in China on business. Or dead. In that scenario a classical musician with a degree from MIT.

Her instructions are simple. See that he eats. Reggie is a finicky Vegan. He swears the cook Esa (Olga Merediz) is poisoning him with beef broth in the sauces of her terrible food. Reggie speaks fluent Spanish with her.

The other order is to see that he drives to and from school. He is absolutely not to walk through the park. And see him off to summer camp.

Remarkably self absorbed and independent Reggie has made “arrangements” to counter all of his mother’s rules. He has an “understanding” with the driver who is a more or less retired gangster. So, rain or shine, Reggie hikes to school lugging the cello.

Eleanor, while not on the take, quickly realizes the futility of trying to disrupt his subversions of authority. He has a mind of his own and then some.

What could he and Eleanor possibly have in common?

Well, quite a lot as the film evolves. There are daily walks in the park and time spent quietly reading. He finds Grapes of Wrath a bit of a downer. They discover a common love of music. In high school she played cornet and was admitted to Julliard. Not offered a full scholarship that didn't happen. Down on her luck she pawned the horn.

Dennis keeps showing up and wanting her back. Reggie offers to take care of that. He can have someone, his driver/ hit man, talk some sense into Dennis. No thanks. But he keeps probing wanting to know who she is. For once in his lonely life he is actually interested in someone else.

Her life is a mess and she doesn’t want to talk about it. Until she gets a call that her alcoholic father is on his death bed in upstate New York.

Eleanor negotiates a deal with Reggie. She will get a friend to be with him and leave for just 48 hours. He has a better idea. Why don’t I come with you.

The train wreck of her private life and white trash family are glaringly revealed. Reggie absorbs the real life lessons. The sharing of that misery creates an even greater bond. It is clear that they really care about each other.

Then. Time’s up. For Eleanor it was always just a temp job. She has to move on and sort out the messy threads of an unraveled life. For both of them it has been a respite from the nagging turmoil of the human condition.

We won’t spoil the finale of a film you must absolutely promise that you will see. For sure this is one of the most heart rending experiences you will have in a long time.

Suffice it to say that in the final minutes there wasn’t a dry eye in the house.