Parsifal at Lyric Opera of Chicago 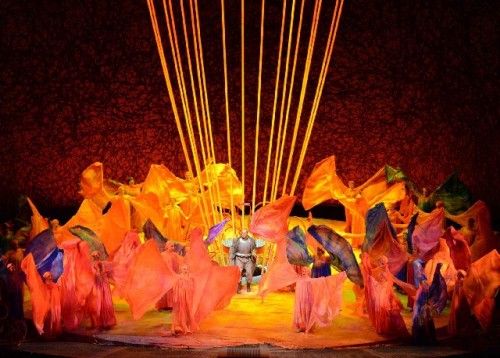 The sets are a riot of color. 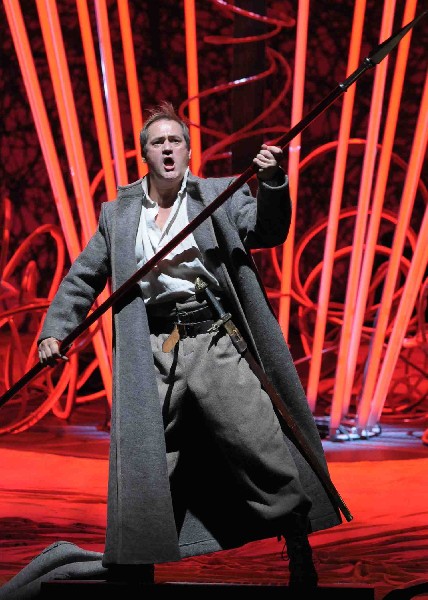 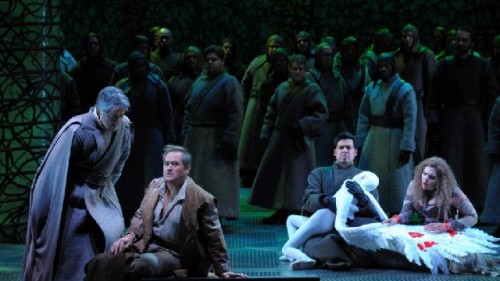 A swan killed by Parsifal. Groves and Karanas tangle. 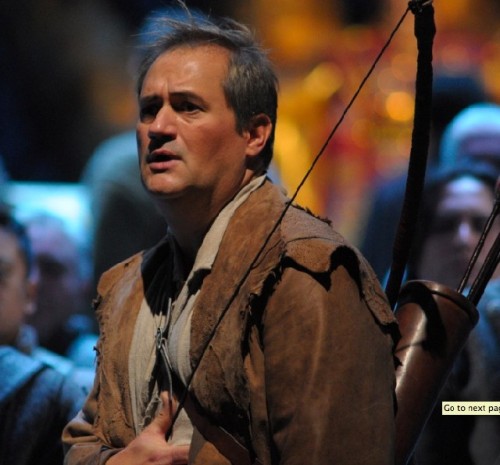 Paul Groves as Parsifal, a young and confused wanderer. 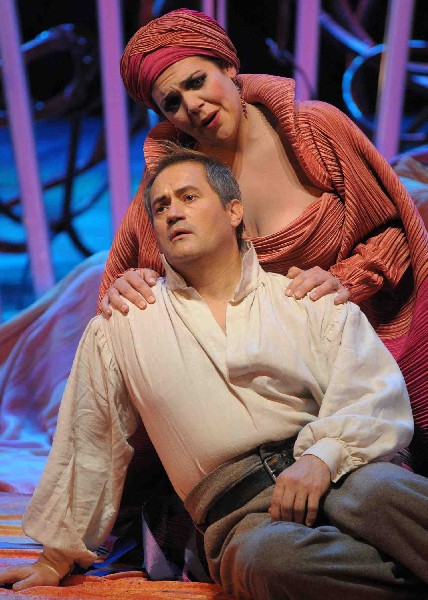 An Anguished Karanas and Groves as Kundry and Parsifal, Before the Kiss 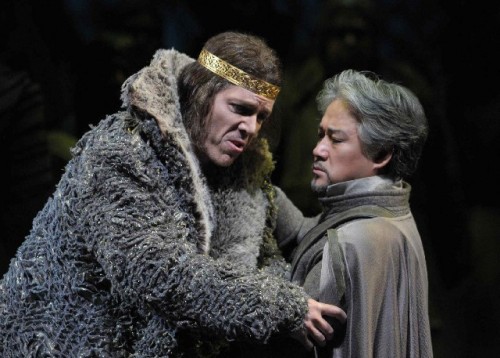 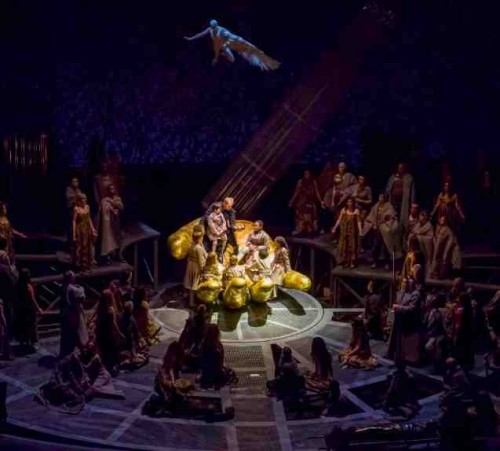 The End or the Beginning?

John Caird and Johan Engels’ production of Parsifal at the Lyric Opera of Chicago is an unqualified success.  Exiting the theater with the packed house over and over laudatory phrases were lofted: “Home run for Wagner”, “I can’t believe it was so long.  I was rapt,” “Beautiful in every way.”

And so it was.  Parisfal is an incontrovertibly great Wagner opera. It was his last, and an appropriate way for the Lyric to end the celebration of the 200th year of his birth.  Wagner had moved to not only an embrace of religious experience, detailed in Parsifal in recreations of the Christian Good Friday rituals, but to a wish for compassion yielding redemptive grace.

It is heady stuff, made real at the Lyric by wonderful singing, artfully designed gestures in the singers, often accompanied by dancers who wove their own spells in Tim Claydon’s choreography which is integral to the drama.

The problematic killing of the swan is handled beautifully.  Three swans swoop in the background.  One falls to the ground, killed by Parsifal.  The swan is soothed in a lap, its human outlines making it all the more moving.  The bright red which continues throughout the evening to symbolize both blood and heat delicately marred one white wing.

The set, in some ways simple and yet richly suggestive, seems to move with the music.  When someone like Anthony Freud, who so well understands the opera form, runs a company, such unusual and difficult accomplishments are possible.

Most of the action takes place on a large tiled and raised circle, which is bare when the esquires enter with Gurnemanz at the start. Trees grow when it becomes the Monsalvat Castle.   See-through tubes filled with twisting branches visually fold into a background projection of Jackson Pollock-like tangles. They are everywhere, capturing Kundry and then sitting behind the vase-like neon structure and stage left and right.  This is a tangled story. In the second act, a dangling mirror allows Klingsor to demand Kundry's compliance.

Duane Schuler’s lighting hits new heights. The hues of the green, blue, brown spectrums seemed to move with the mood and the vocal lines and the orchestra, conducted with expansive support of the singers by Sir Andrew Davis.

Paul Groves (http://www.berkshirefinearts.com/09-10-2011_manahan-conducts-mahler-at-the-baryschnikov-center.htm) has a wonderful lyric line and the perfect heldentenor edge. On this opening night, and perhaps because he is an onlooker until the middle of the second act, he took a bit of time to warm up. But in his lyrics around the recognition of his mother and his annunciation of  “Amfortas, die Wunde!” he gains the compassion which will lead to redemption. He parries the oncoming sword spectacularly. There were many stunning moments in his third act ascension.

Kwangchul Youn, who rose to prominence in the Gurnemanz role when he stepped in for the Swastika-tattooed Evgeny Nikitin in Bayreuth, is simply wonderful. He states aptly that the role must be sung with bel canto style and sound like speech; smash up of aria and recitative. That he pulls this off is a testament not only to his intelligence, but also careful phrasing of each word based on its meaning.  He is submerged in the difficult and seemingly endless role. Having seen Parsifal four times this year, twice with Pape at the Metropoitan Opera and once in Budapest with the formidable Matti Salminen, this rich voiced Youn performance was the best in my opinion.

Thomas Hampson is an anguished Amfortas, caught between guilt and a desire to end it all, with little consideration of his compatriots. He is cut off from the Grail and dying.  From his first uncovering of the Holy Chalice, Hampson is a delicious mix of the sacred and profane.  Particularly in the third act when he is redeemed by Parsifal, the pure man, Hampson’s voice had all that full-throated beauty we have come to love.

Daveda Karanas makes her memorable Lyric debut in the role of  Kundry. Of all the principal performers, she either responded to, or was given unique direction to give full body expression to the creation of her role.  These ranged from heratic gestures to a phrase ending punctuation with a hand thrust in air. You could not take your eyes off of her.

Kundry has the most difficult transformations to make, from an animal-like crawler beneath the surface of the earth, to sensual seducer, then numb holiness.

Engels’ costumes, in large part medieval, helped Kundry.  In the second act, she wore rainbow-colored Issay Miyake–like pleats in a stunning cape and strapless combination.  The flower maidens were swathed in multi-colored chiffon, and entered fluttering a multicolored chiffon breath of air which descended to cover the central circle around a vase made of red neon tubes extending up at an angle.

Tomas Tomasson as Klingsor arrived on a pedastle moving up near an iconic gold hand holding a lordlike figure.  This image was repeated in Act III, as a hand which arrives palm away from us and then folds to offer itself up on the stage floor. The communion service happens around it.  Urns filled with wine, and see-through rectangles housing bread are passed around.

It is difficult adequately to express the impact of the evening. Without in any way diminishing the music, and in fact enhancing it, the setting captured Wagner’s religious sense, an evocation of ritual, and wish for redemption in one fell swoop.  It was done with a riot of color evoking wonderful images fitting the tone and musical line. At the end the Grail glows while a white swan floats down.

An extremely satisfying evening of opera.