The Life and Times of Lee Harvey Oswald 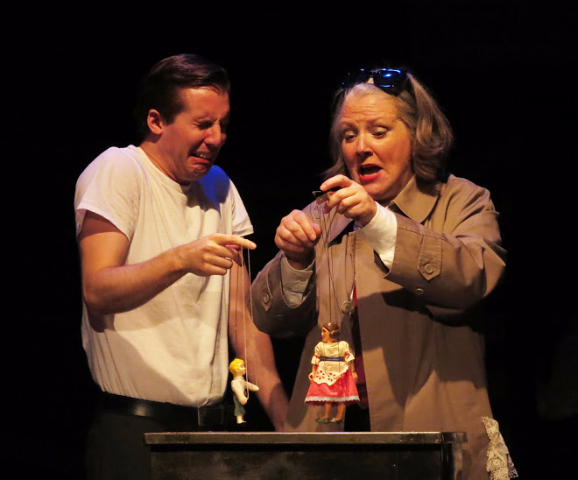 Photo by Jonathan Slaff Oswald argues with his mother. The actors are Jeffrey Roth and Michelle Beshaw. 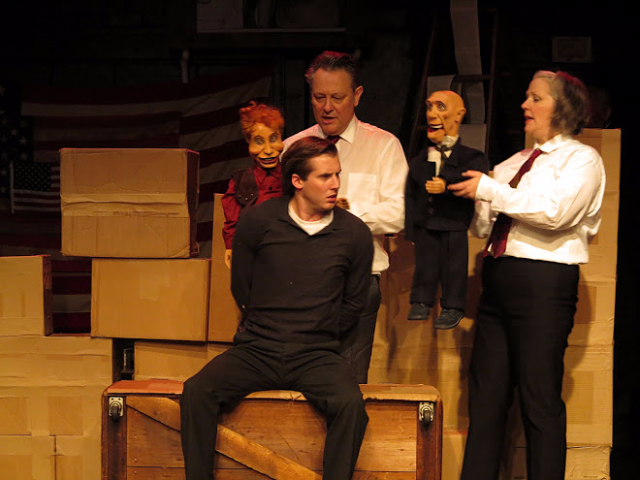 (Photo by Jonathan Slaff) Oswald is in custody. The performers are Jeffrey Roth, Ben Watts and Michelle Beshaw.

The central figures are puppets in The Life and Times of Lee Harvey Oswald, yet it’s a human actor who proves most effective.

In a well-rounded, vivid performance, a riveting Jeffrey Roth shines as the alleged JFK killer.

The multi-award-winning, renowned La MaMa theater company is presenting the staging, in association with GOH Productions along with Czechoslovak American Theatre.

For parts of the production, running through Nov. 19, you may find yourself utterly confused. This convoluted show at times feels more like a children’s puppet spectacle than a compelling historical drama. That’s not to say the marionettes utterly fail to elucidate a theory, which writer and director Vit Horejs puts forth. In this show, there’s no second guessing that Oswald was the triggerman.

Whether he acted alone isn’t up for debate in the roughly 99-minute play.

Horejs’ premise appears to be that President Kennedy’s assassination and other tragedies of the time period were destined to happen. Fate seems to have predetermined the popular president’s – and other prominent 1960s historical figures’ -- premature deaths by assassination. And so, Kennedy, his brother Robert, and Rev. Martin Luther King Jr. appear in the show as marionettes. They are led, as though by fate, to their untimely demise.

There’s no attempt to include Memphis as a setting in the play, which is curious. That city is, after all, the place where someone killed King. Instead, performers pull all three figures toward the Dallas, Texas location of Kennedy’s assassination.

That’s not the only problem with this play.

In a haphazard manner, it jumps back and forth in time.

There is also no exposition. Including expository material would explain, for example, the “exhibits” within the play. Reading signs such as “Exhibit 17587 New Orleans, 1939” might lead one to question the framing device behind the displays. Are we in a museum with audience members serving as visitors to an exhibition about Oswald? Is the play’s framework some sort of court hearing?

As you enter the theater, it’s hard not to expect a dark, gripping historical drama. Foreboding music plays and the set is dark. But as the play opens, it’s hard to figure out the purpose of all those boxes stacked upon each other. Moreover, who are those shady-appearing people sporting dark glasses pointing to certain folks in the audience? Are we, meaning humanity collectively, somehow being implicated in the assassination by creating an environment that allowed something like this to happen? If the author is saying that, he doesn’t explore this concept beyond the opening scene.

Even as performers lead on strings the marionettes representing the Kennedy brothers and King to Dallas, there’s little sense of a dramatic build-up or rising action leading up to the killing.

As a result, the play is often tedious. During the curtain call following the performance  applause sounded more polite than enthusiastic.

Roth, the actor who plays Oswald, deserved much louder applause. The performer’s face convincingly puckers into expressions of arrogance and defiance. At other times, he endows the assassin with a maniacal, panicky, desperately determined demeanor as authorities haul him off to jail. You feel as though you’re watching a criminal in real time react to the trouble he’s facing.

Roth isn’t the only positive in this production. The puppets are eye-catching and well-built.

The problem is, there are so many of them and they’re  often bunched, so you can’t tell one from another.

In the end, this play tries to do too much, including representing the protagonists as “a peculiar cross between Greek tragic figures and stock characters from traditional puppet murder mysteries.”

The result is just that – peculiar.

In the end, Horejs doesn’t heed a piece of advice from Stephen Sondheim.