Focusing on Off Broadway 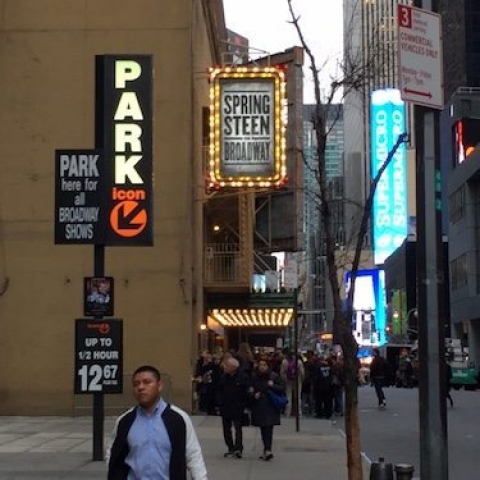 Springsteen was tempting but just too expensive. Bishop photo. 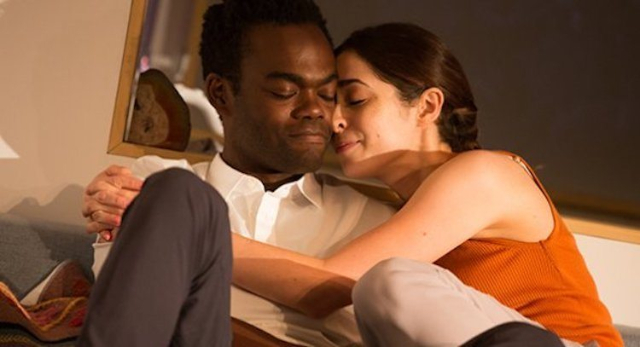 Harper and Milioti in After the Blast. Photo courtesy Lincoln Center Theater. 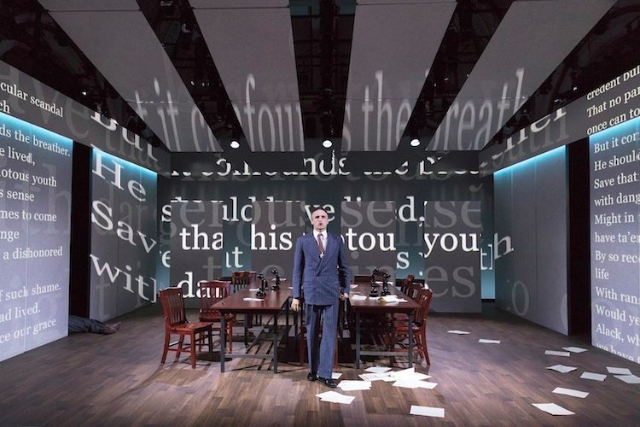 Pete Simpson as Angelo in Measure for Measure. Photo by Richard Termine. 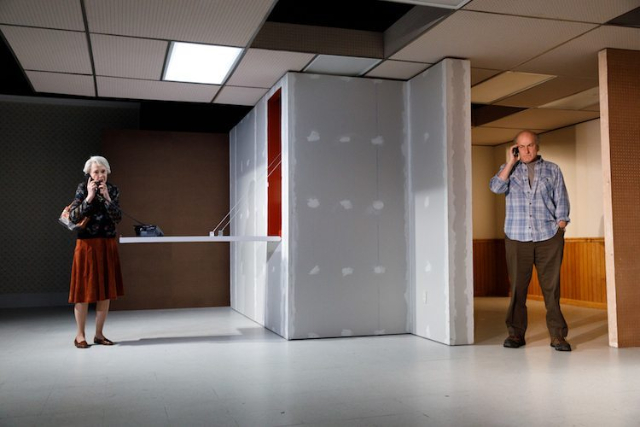 Third Coast Review (and Berkshire Fine Arts) went to New York last week—mainly for The American Theatre Critics Association (ATCA) conference. The schedule provided plenty of time for great theater, and I took advantage of that by seeing four interesting off-Broadway productions. But no Broadway musicals. If you’re interested in Dear Evan Hanson or Come From Away, you’ll have to go elsewhere. But I did have one Broadway regret.

That was the show I didn’t see. I’m a huge Bruce Springsteen fan—I’ve seen him in concert dozens of times, but I thought the tickets to his Springsteen on Broadway show were too expensive. I was able to buy tickets for these off-Broadway plays and pay for dinner as well for the price of one Springsteen ticket. (The Walter Kerr Theatre where Springsteen is performing was right around the corner from my 8th Avenue hotel.)

Here’s a recap of my theater week, highlighted by two excellent dramas at Lincoln Center, a madcap take on Shakespeare, and a thoughtful new play about mother-son relations. And I even squeezed in a delightful children’s theater production.

After the Blast, directed by Lila Neugebauer, is a dystopian tale of a world after environmental catastrophe. Everything is frozen. It’s nuclear winter. The characters are mostly scientists, who talk matter of factly about when they will get to go “upstairs”—that is, above ground, again. (The answer is not very damn soon.) Their work is finding ways to sustain humanity below ground as well as to prepare for “rehabitation” of the earth at some distant future time. (One of the scientists admits that they let it leak that rehabitation might be sooner to keep people happy and give them some hope.)

Oliver (William Jackson Harper) and Anna (Cristin Milioti) are settled in below ground. Their contemporary home is Ikea-store simple and well-designed, but their only connection to nature is through images on a projection screen that becomes a “window” in their apartment. People use substances like marijuana to help them cope. They also can “sim”—simulate experiences above ground. If you want to visit the mountains or seashore or see penguins in a zoo, you can “sim” it.

Their friends Carrie (Eboni Booth) and Sam (Davis Pegram) are having a baby and Oliver and Anna yearn to have a child too. Propagation is tightly controlled and Anna is preparing to apply for her fertility treatment, but she has been rejected before, partly because of her depressed state of mind.

Oliver brings home a helper robot to help her prepare for her next fertility interview. Anna’s role is to train the robot in movement and speech, so that the robot can be assigned later to a disabled person who needs support. At first Anna rejects the robot, but gradually she gives in and begins to work with it. The robot responds, becomes Arthur, and Arthur and Anna develop a strong, affectionate relationship. Milioti’s performance as friend and mentor to Arthur is sweet and believable. Anna passes her next interview and Oliver and Anna may be on the road to becoming parents. Or not. (I pondered whether there is some parallel between training a robot and raising a child.)

After the Blast is a warm, humane story that is terrifying in its implications. The nuanced direction and performances are excellent. It continues at the Claire Tow Theater through November 19.

Measure for Measure by Elevator Repair Service at the Public Theater

Perhaps you’ve seen Elevator Repair Service in Chicago. They performed their six-hour masterpiece reading of F. Scott Fitzgerald’s The Great Gatsby—in a play titled Gatz—in 2006 at the MCA theater. More recently, they brought their dramedy of a Supreme Court case titled Arguendo to the MCA theater in 2014.

Measure for Measure is less successful than the other two ERS plays, but it is refreshing in its approach to the Shakespearean canon. The play is done in modern dress, set at some indeterminate modern time and performed on a set furnished with several rectangular office tables and a dozen chairs—plus six or eight early 1900s-era “candlestick” telephones. The cast proceeds at breakneck speed, with actors often speaking so fast you can’t understand them. But most often, the text itself is rolling up the wall and across the ceiling of the set. (It’s performed in the Public’s third-floor LuEsther Theater and runs through November 12.)

Scott Shepherd, who played the lead in Gatz, is cast as the Duke (and masquerades as a friar). The bad guy, Angelo, who takes over the kingdom when the Duke departs, is wickedly played by Pete Simpson. Claudio (Greig Sargeant) is wrongfully imprisoned and his sister Isabella (Rinne Groff) pleads with Angelo for his release. She becomes entangled in two different tricks that are part of the play’s intricate plot. The “bed trick,” wherein Angelo is fooled into thinking he has slept with Isabella, and the “head trick,” wherein the head of the wrong prisoner is brought to Angelo as proof of execution. Various actors portray jailers, executioners and other functionaries in madcap fashion and bizarre costumes.

Measure for Measure (or M4M) is considered one of Shakespeare’s “problem” plays and it isn’t often performed. My brief recap suggests why. I’ve read M4M and I have seen it at least once. I think that going to see M4M without any knowledge of the play might make it hard to follow. But I applaud ERS and the Public Theater for commissioning the play. And I definitely look forward to the next production by Elevator Repair Service.

Junk is Akhtar’s latest play, which opened last week at Lincoln Center. I saw the play in its last preview performance. It is spectacularly staged and performed, on a set divided into six to eight honey-combed cells on two levels. The scenes are short and the dialogue is smart and snappy. I’m sure we’ll see it in Chicago soon. One of Akhtar’s plays, The Invisible Hand, is currently running in an outstanding production at Steep Theatre. Goodman Theatre presented Akhtar’s Pulitzer-Prize-winning Disgraced in 2015.

Junk refers to the 1980s high-yielding junk bonds used in the practice of corporate raiders taking over companies, often by using the company’s own assets to do so, then stripping the company of its remaining financial, real estate and equipment assets, and firing employees to make the company more profitable—and sometimes to just plain kill it. The plot and characters closely resemble the Michael Milken/Ivan Boesky scandal, although of course, the playbill specifies that the play is a fictionalized account and the characters are “stitched together and never anything other than fiction.”

The Milken-type character is Robert Merkin, played a little too blandly by Steven Pasquale. The large cast is made up of an array of investors, lawyers, an ambitious journalist, a Guiliani-type prosecutor who runs for mayor, and the doomed president of an old manufacturing company targeted by Merkin. The Boesky-type investor character is believably fleshed out by Joey Slotnick, a Chicago actor and member of the Lookingglass ensemble.

The story may remind you of a Chicago production of Other People’s Money, staged by Shattered Globe in 2013. Instead of Robert Merkin, we had Larry the Liquidator, played here by Ben Werling and in the 1991 film by Danny DeVito. The plot is similar but Junk is much more sophisticated, both in staging and script.

The Junk production was first staged in Los Angeles and the New York set seems to be identical to the LA version. Director Doug Hughes and scenic designer John Lee Beatty moved the LA production to New York. My question: Will a certain Chicago theater pick up the production and move it unchanged to a Chicago stage? That has happened recently with a couple of successful New York productions. Junk is scheduled to run at the Beaumont until January 7. I’d bet we’ll see it here in the 2018-19 theater season.

The Treasurer by Max Posner at Playwrights Horizon

David Cromer directs this rather low-key story about a middle-aged man, The Son (Peter Friedman) and his widowed mother Ida (the great Chicago actor Deanna Dunagan), who has spent all her funds and is inching toward dementia. The Treasurer is so designated by his two brothers, who ask him to watch out for their mother’s finances, while they fund her move to a luxury retirement center, rather than a more modest home in keeping with her financial status. “But I’m a Beaverbrook person,” she says. “That’s where all my friends are.”

The story is carried out mostly by telephone conversation. Son with brothers, son with mother. Ida reaches out for human contact in scenes with retail store clerks as she tries to buy purple pants, new pillows ($700 each or two for $1200) and a new smartphone.

Posner uses a narrative technique where the character narrates what he is doing, to us, the audience, without physically doing it. The play opens with a monologue by The Son (the Treasurer) who stands stage front as he tells us he is riding his bike and knows that he will go to hell. That prediction ties in to the ending of the play, but I didn’t think the ending fit with the whole tenor of the play.

The set is designed with angled walls, so often a character is unseen (in another room or space), represented by a disembodied voice. I like the way scene changes are handled in this 90-minute play. Crew members simply walk on stage with a new prop or piece of furniture. While the current scene continues, they get ready for the next scene. It’s naturalistic and practical and fits with the style of the play. The Treasurer closed November 5.

My Perfect Pet by Jeff Eisenberg at the Playroom Theater

This original play is about a young girl who hopes to get a puppy for her 10th birthday. It takes a while for her to prove to her parents that she really is ready for a puppy but when the puppy does arrives, it’s a perfect surprise. Two college students portray the two sisters and a new graduate portrays their friend Josh (and the puppy). The parents are portrayed by two experienced actors.

My Perfect Pet is perfectly adorable and runs just over an hour. The many small children in the audience (recommended for ages 4 to 9) were delighted too and bounced around in their seats to the tuneful music. My Perfect Pet runs on Saturdays through November 18.