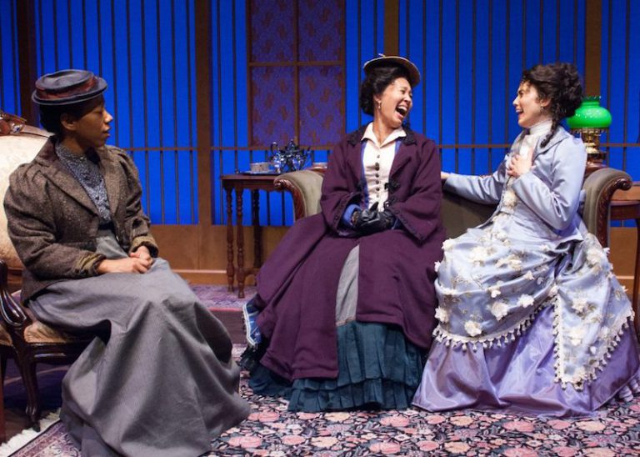 McNeil as Elizabeth, Canciller as Mrs. Daldry and Therrien as Mrs. Givings. Photo by Lara Goetsch. 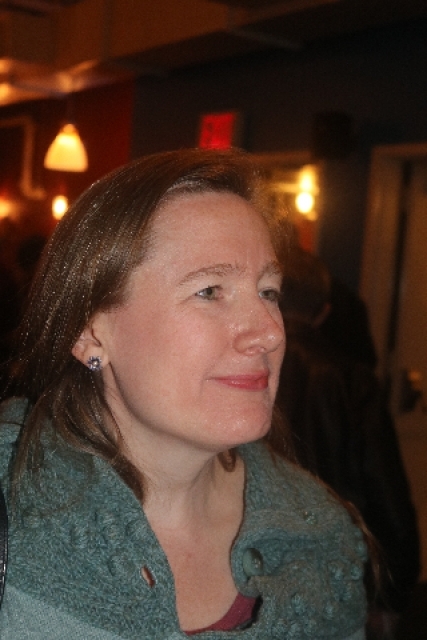 Timeline Theatre’s new production, beautifully directed by Mechelle Moe, is the story of Dr. Givings (Anish Jethmalani), the inventor of an “electrical stimulator” to treat women’s “hysteria:” the name for many kinds of female distress, from sexual frustration to depression. Sexually, women were considered vessels for men’s needs and childbirth. When Dr. Givings treats his patients, they respond with “paroxysms” as well as vocalizations of pleasure. (Audience members, both male and female, clearly enjoyed the latter.)

Dr. Givings’ new machine takes the place of manual stimulation, which doctors had used for years to relieve women’s disorders. But occasionally, when the electrical device isn’t doing the job, the doctor or his ever-capable nurse Annie (Dana Tretta) uses the manual method. Yes, reaching under the blanket with his finger or the device, the doctor performs the act, while chatting about medical topics and Benjamin Franklin’s discovery. One could accuse Dr. Givings of being clueless, but he is a man of science, as he regularly reminds his delightful wife, Catherine (Rochelle Therrien), who yearns for her husband’s affection—and to know what goes on “in the next room.” She feels guilty because she’s unsuccessful at nursing her infant daughter and so she hires a wet nurse. Elizabeth (Krystal McNeil), whose infant son died, proves to be a capable wet nurse and the Givings’ daughter thrives.

One of the doctor’s patients is Mrs. Daldry (Melissa Canciller), delivered to the doctor by her husband (Joel Ewing) because she’s sensitive to light and cold, can’t play her beloved piano, and weeps for no reason. Mrs. Daldry responds enthusiastically to the first treatment (“I feel wonderful!”) and returns for more. Canciller’s performance is outstanding; her every expression, sound and gesture are right and always in character.

After Mrs. Givings experiences her own use of the electrical stimulator, she and Mrs. Daldry trade notes on their experiences—experiences that were really sexual awakening even though they can’t explain or understand it. What did it mean?

As if to prove the efficacy of the electrical stimulator treatment, one of the patients is a dashing gentleman artist, Leo Irving (Edgar Miguel Sanchez), who charms all three women after a treatment makes him “feel wonderful” and he regains his ability to paint.

Female orgasms have a strange history. In ancient times, the belief was that both men and women had to experience orgasm to conceive a child. However, in intervening centuries, that was forgotten. Some time in the 20th century, scientists rediscovered female orgasms—just in time for second-wave feminism’s embrace of female sexuality.

The design team for In the Next Room contributes spectacularly to the success of this production. The perfectly designed Victorian sitting room was created by Sarah JHP Watkins, with Brandon Wardell handling the subtle lighting changes. Gorgeous female costumes in a palette strongly blue and green, complete with bustles, are designed by Alison Siple. They’re not only beautiful; they can be removed easily for the treatments “in the next room.”

Sarah Ruhl, a Chicago native, is also author of The Clean House, Dead Man’s Cell Phone, Eurydice, Orlando, The Passion Play and For Peter Pan on Her 70th Birthday, a play she wrote for her mother, actor Kathleen Ruhl.