Kurt Vonnegut's Make Up Your Mind 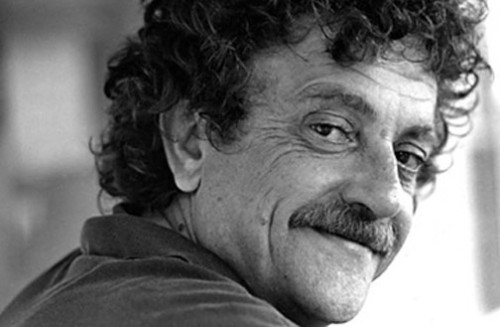 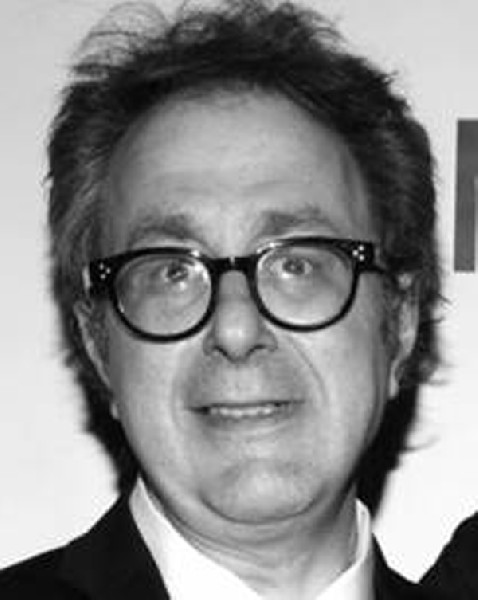 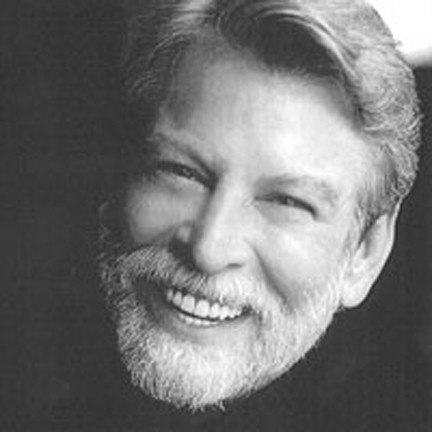 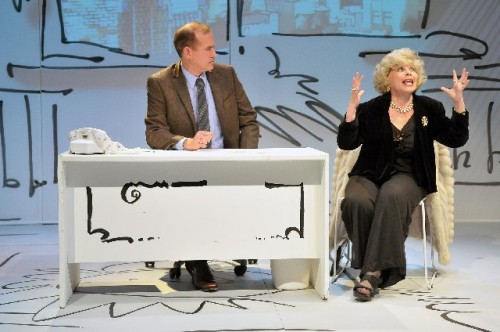 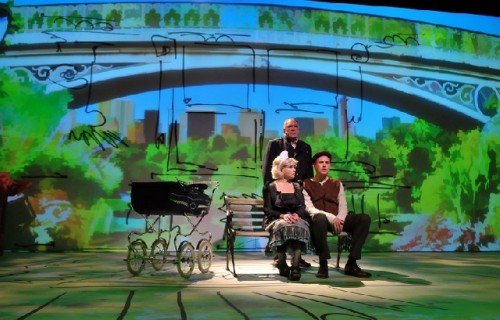 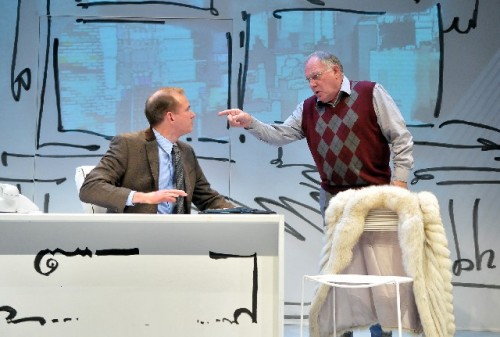 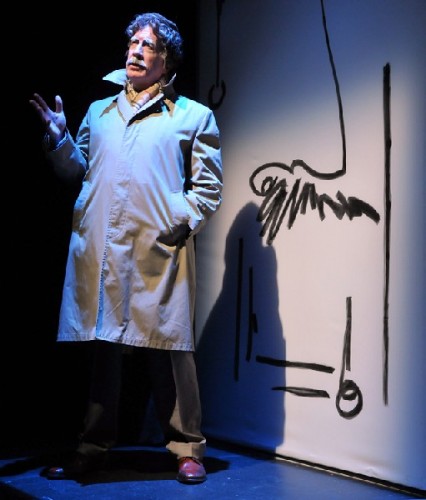 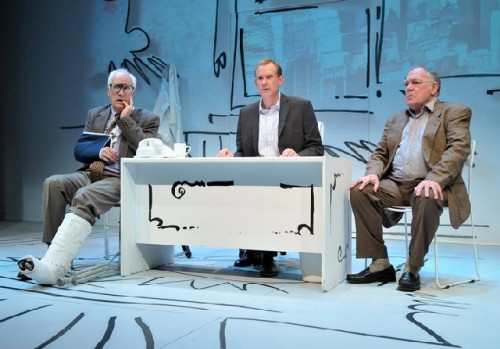 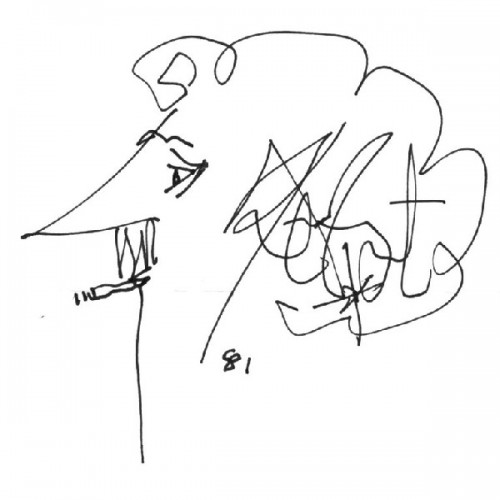 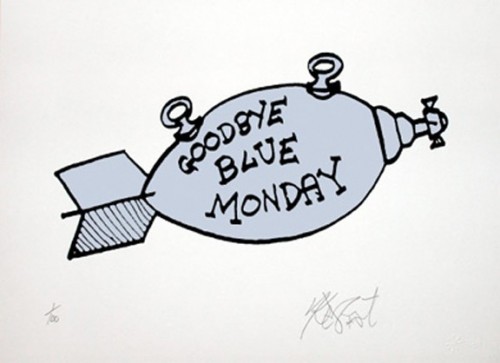 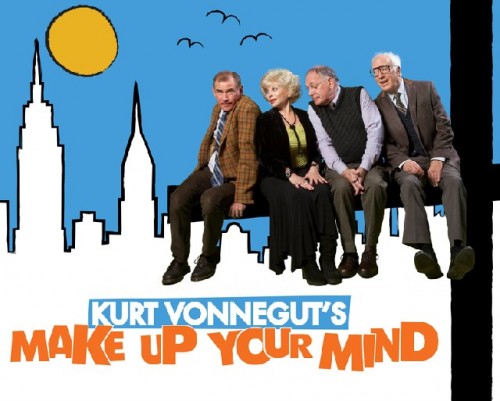 Kurt Vonnegut's Make Up Your Mind

At the SpeakEasy Stage Company

At the Roberts Studio Theatre in the Calderwood Pavilion

90 minutes with no intermission

Kurt Vonnegut was a doodler. He loved to doodle with line, words and imagination. In all of his doodling, his lines flow. In the World Premiere of Kurt Vonnegut's Make Up Your Mind, now at the SpeakEasy Stage Company through November 30, we see how Vonnegut's humor, wit and a bit skewed perspective brilliantly treats the very serious issues of personal achievement, marriage, father/son relationships and therapy.

Based upon original Vonnegut writings from 11 different scripts written prior to his death, Broadway Playwright Nicky Silver (The Lyons, Pterodactyls and Raised in Captivity) has assembled this comedy. Peppered with sarcasm, verbal barbs and cultural references, this play very well reflects Vonnegut's own quirkiness, black comedy, pop culture criticism and even surrealism. There is a radiating cleverness to this production.

The plot focuses on the thinly disguised near charlatan short term therapy services of Roland Stackhouse, an awkward practitioner of counseling to the indecisive. He gives forth what appears to be sound advice. But if not taken, a bogey man enforcer hired by Stackhouse punishes his clients/patients violently for not mending their ways. Very Vonnegut.

Yet, Stackhouse, played purposely awkward and precisely overly seriously by a very good Barlow Adamson, is truly a visionary humanist who sees the good that he is doing as the answer to one of society's greatest ills--indecisiveness. Here Vonnegut seems to reference all of our snake oil salespeople who prey upon the emotionally needy. These include feelgood preachers, charming spiritual gurus, business development motivators, lifestyle wizards and even the now with moldy feet of clay EST Movement.

Along the way, the narrative deals with father/son conflicts, marriage woes, inherited vs. personally acquired wealth and confused clergy. The dialogue teeters between laugh out loud gaffaws and swallowing hard poignancy.

Directed wonderfully by Cliff Fannin Baker, the play is shaped with characters that could be cartoons but instead are portrayed with realism and humanity. Mr. Baker is a master. Here, Vonnegut's voice is heard, but playwright Silver has given it rhythm while director Baker has give it resonance.

Though delightfully entertaining, to be fair, the play is not perfect. The first two thirds of show are nearly so, but the last part could be pared down a bit and made less wordy. But, perhaps Vonnegut meant to show us that things are not symmetrical, always unbalanced, even a little long-winded? Life is messy.

The performances are universally strong. Each actor was terrific. Ross Bickell's bombastic, prying, hurtful father was like watching a storm brewing. Richard Snee's wealthy client and Vonnegut impersonation were troublingly as well as smilingly realistic. But the best performance was by Tracy Goss. Her overripe and over rich Karen Finch was a wonderful portrayal of a character that could have easily stepped over the line into caricature rather than her superb characterization. Bravo Tracy Goss!

The stagecraft was sensational. Using Vonnegut's superlative doodle lines and sketches, the creative team fashioned a set and environment that was at once imaginative, surreal and accessible. Apparently, this was a real creative collaboration between scenic designer Eric Levenson, sound designer David Remedios and projection designer Seaghan McKay. The sets were spectacular, the sound was reinforcing to the narrative and the projections and animations were simply brilliant.

Kurt Vonnegut's Make Up Your Mind is a special entertainment. Unexpected in a conventional way, this clever show transports us into the imaginative perspective of the brilliance of Kurt Vonnegut. Like him, this play is truly an American original. Very Vonnegut.