Eurydice by the Artistic Home 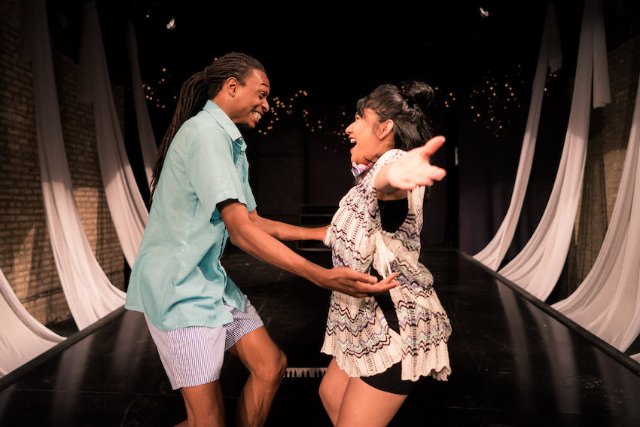 Orpheus and Eurydice are on the beach—two adorable young lovers. He’s lost in his music and in describing his love for Eurydice. He plays the melody he wrote for her on the melodica and asks her to remember it. Meanwhile, he despairs of her lack of rhythm. She just can’t keep the beat.

Eurydice by Sarah Ruhl is the new production now being staged by the Artistic Home at the Den Theatre. It’s the ancient story of the wife who dies and the husband who tries to bring her back to the world of the living, but Ruhl tells this version from the viewpoint of Eurydice. She has written a funny, contemporized version of this love story, set somewhere nearby and perhaps in some current time. No spoilers here, for this story is millennia old, based on the Greek legend of Orpheus, the son of Apollo. The best known of these ancient poems were by Virgil and Ovid.

The Artistic Home takes full advantage of Ruhl’s script in recreating this charming and tragic story. Kathy Scambiatterra directs the cast of four, and a chorus of three, and builds on Ruhl’s stage directions in endearing and often comic style.

Love turns to marriage and soon Eurydice (Karla Corona) is dressed in bridal white. The Nasty Interesting Man (Todd Wojcik) lures her to his home by promising he’ll give her a letter from her late father. This is Eurydice’s fatal mistake. Orpheus (Steven Cooper) persistently seeks to retrieve his bride with music, a gift and a love note.

In the Underworld, Eurydice meets a Chorus of Stones—Big Stone (Will Casey), Loud Stone (Alexander McRae) and Little Stone (Ariana Lopez). The Stones informally govern the Underworld and they are alternately merry, bored and dogmatic; normal amenities like beds, rooms and fathers are not allowed in their Underworld. One bright note for Eurydice is her reunion with her father (Javier Carmona), who helps her remember the memories she lost by descending to the Underworld.

The play has many surprising plot twists and the story moves swiftly from lovers on the beach to its traditional end, played out Ruhl-style, in about 80 minutes.

Scambiatterra and the Artistic Home creative team chose Eurydice for their first live post-pandemic production and the first production in their new home at the Den Theatre. (They closed their storefront space on Grand Avenue recently.) Scambiatterra says in her director’s note that “Eurydice is that reach back, that looking back one more time to hold on to what we’ve lost, before looking ahead, to commemorate wonderful, beautiful life, its pleasures and problems, its transience and pain so that we can triumph over the despair of this pandemic ….”

Scambiatterra’s direction brings out uniformly strong performances, especially notable in the work of the two youngest cast members, Corona and Cooper, both fairly recent college graduates. Carmona is warm and loving in the strong supporting role of Father.

Kevin Hagan created the severely minimalist scenic and dramatic lighting design, which often is used to  highlight the Stones’ facial designs. Sound design is by Petter Wahlback. Costumes are by Zachary Wagner.

Eurydice continues at the Den Theatre, 1333 N. Milwaukee Ave., through November 21. Tickets are $34 with discounts for students. Performances are Thursday-Sunday.