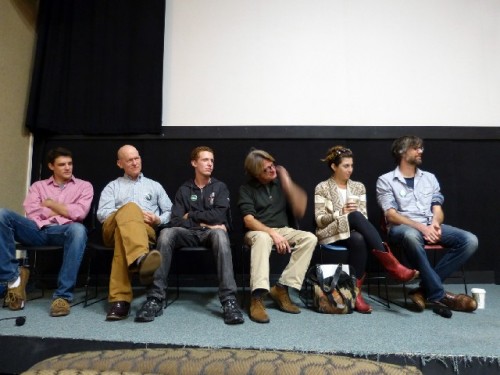 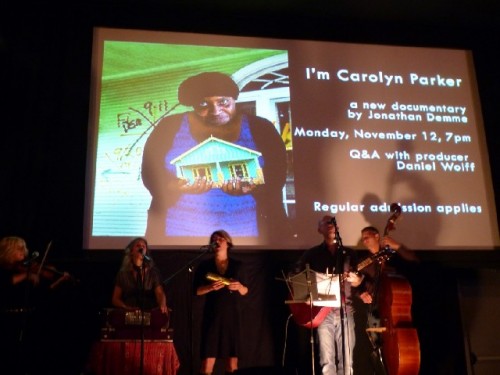 Music entertainment as part of programming. 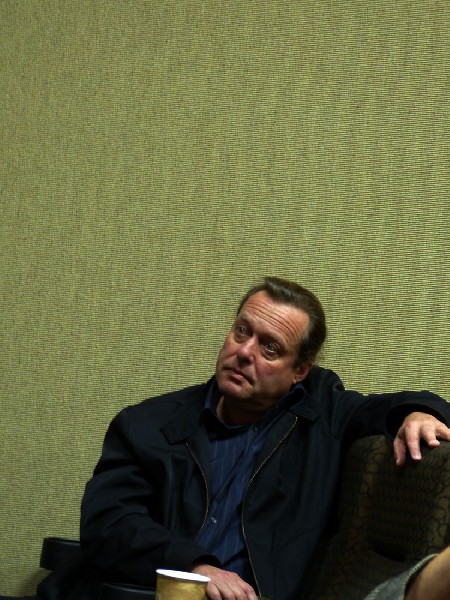 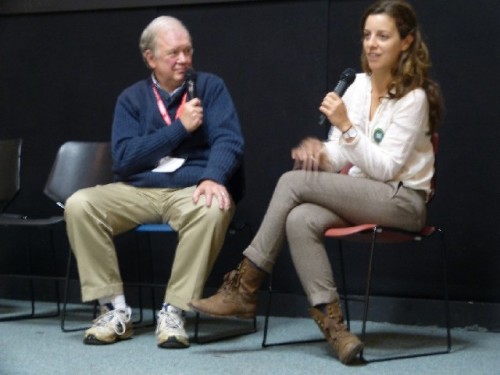 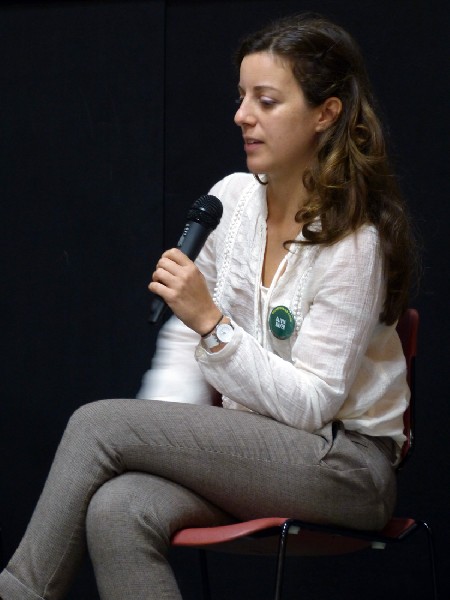 Silver showed Arcadia as a Short Film at WFF. 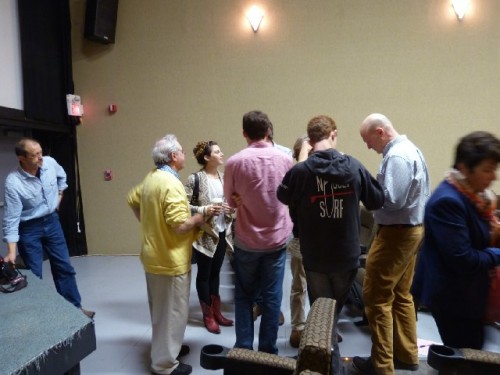 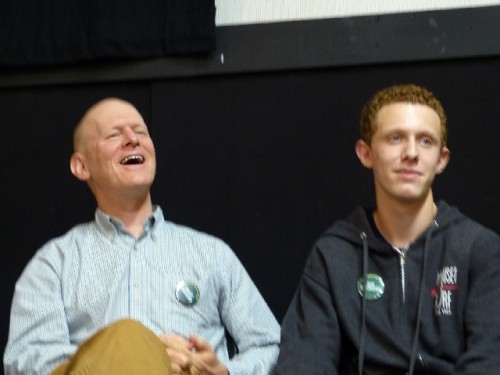 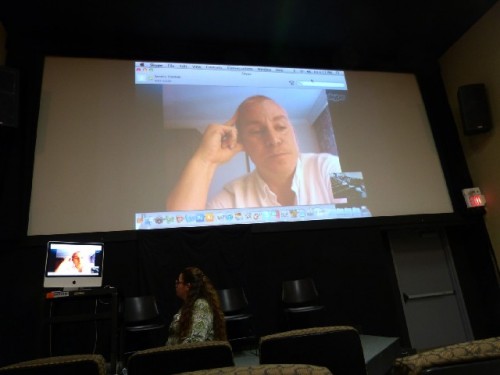 Sandra Thomas skyped in a filmmaker. 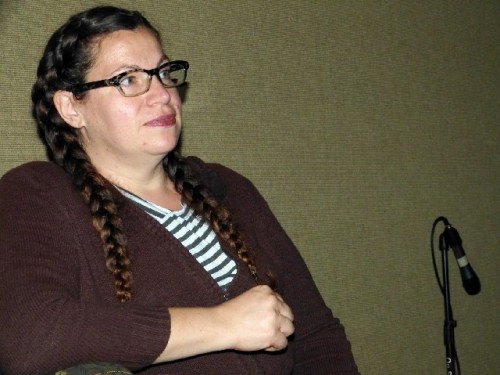 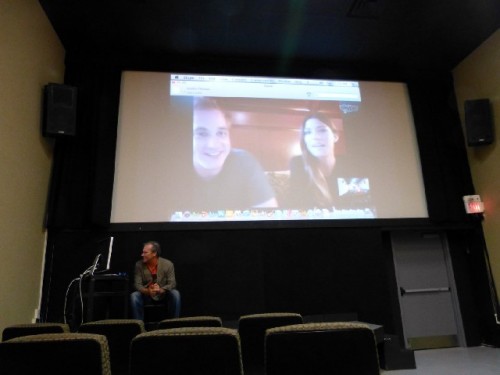 Jeff Kleiser made another skype connection to distant filmmakers. 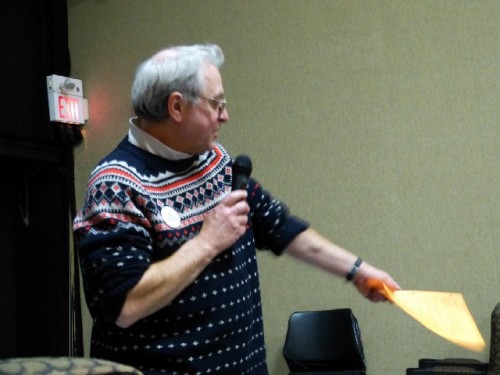 Steve Lawson, founder and director of WFF in action. 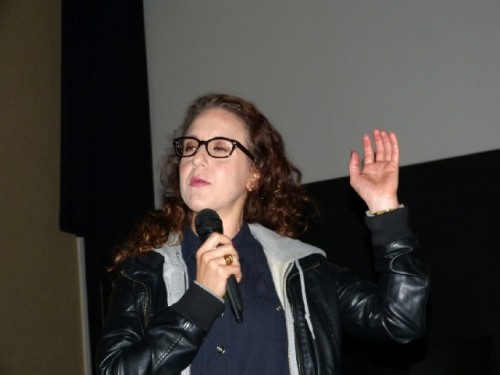 Jenn Harris, star of Gaby, came to discuss the film with the audience. 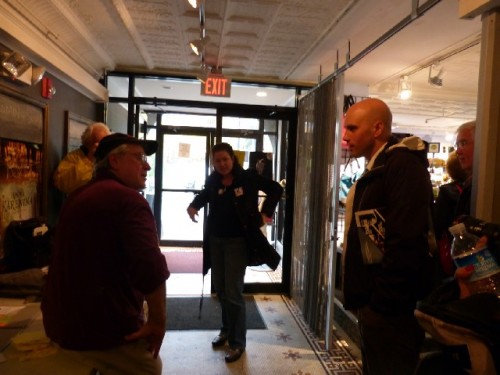 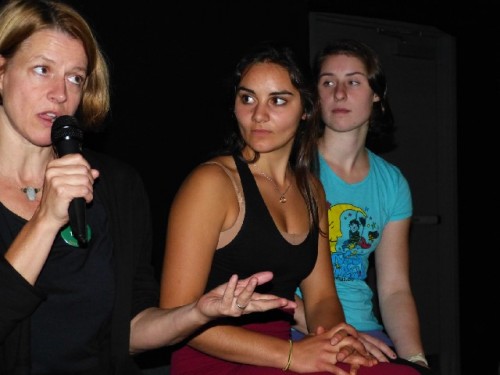 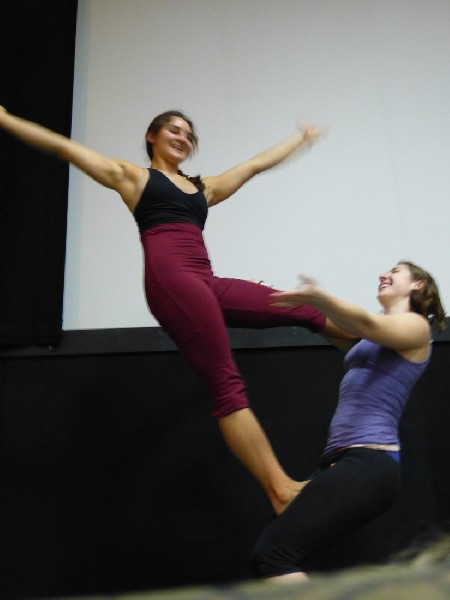 The pros performing and Circus Smirkus is scheduled to return to Williamstown. 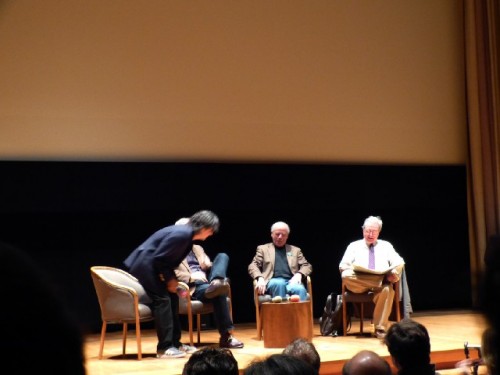 Panel discussion: Novel into Film at the Clark. 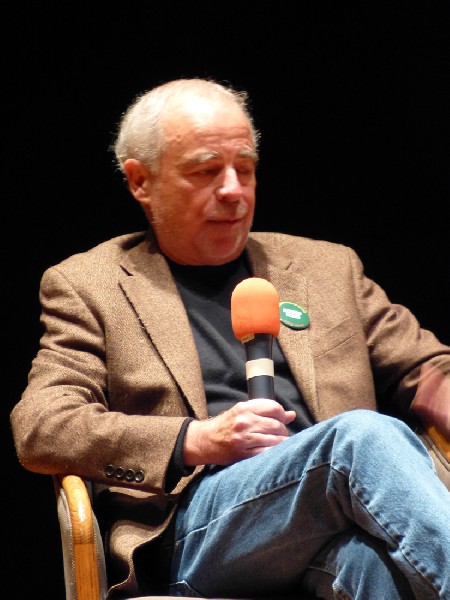 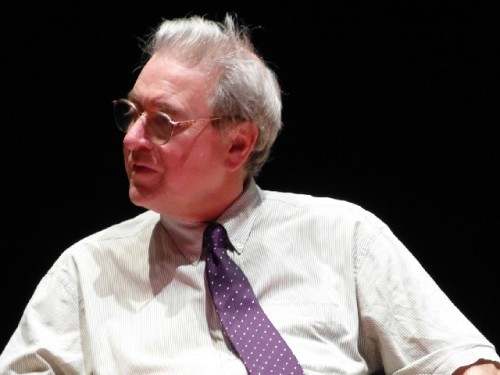 Lawson relaxed at the Novel into Film panel. 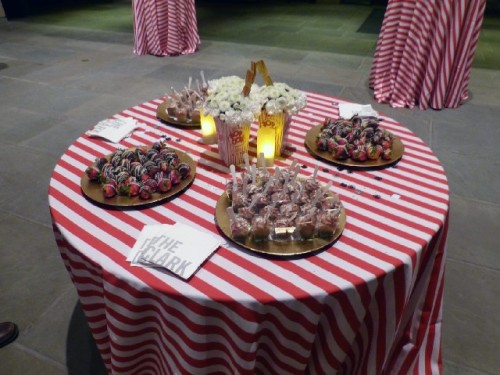 A special popcorn invitation to a movie.

Last year’s Williamstown Film Festival (WFF) was interrupted by an October snow storm, this year the WFF was greeted by balmy weather. ‘You have crazy weather patterns,’ a remark by filmmaker Wolfram Hissen. Since the festival ended we’ve experienced serious work disruptions by various aspects of our lives, including an early flu-season and Sandy.

The Festival started a day before we could attend a first film. It was Hissen’s Dreamscapes about painter, Stephen Hannock, at a sold out screening at Images, Williamstown’s own community movie house. Daily screenings were held at Images, a partner in this long running festival from the very first year in 1998.  The brothers Wolfram and Joerg Daniel Hissen have made documentary films with and for Christo and Jeanne-Claude: Dem deutschen Volke, which chronicles wrapping of the Berliner Reichstag and The Running Fence Revisited among them. The latter Hissen screened last year at WFF#13.

Dreamscapes follows Hannock at work and in life in the US and Europe. During conversations with Hissen, I remarked that the film has a more poetic ambiance than prior documentaries. It conveys the poesy of Hannock's paintings in a beautiful film. Other major roles in this movie are shared by Sting and his wife Trude Styler, who had commissioned an epic painting of the city Newcastle, Sting’s home town. The painting, 'Newcastle upon Tyne,' was first shown there in 2008. We had the good fortune to see the work, nearly finished, before it was shipped to Europe.

Hannock’s large landscapes or cityscapes become illuminated paintings using light, shadows and lighting in the process of years in the making, during which also photos and stories get written, buried or attached as collages into the painting. The landscapes become richer, changed by thoughts, events, memory-illuminations as well.

During the last twenty years, Hannock has made site and purpose specific paintings in twelve restaurants for the entrepreneurs Danny Meyer and Tom Colicchio. The film shows some of the NYC locations and highlights Colicchio, today a celebrity chef, as well. Other sections in the film document Hannock's works that are owned by the Metropolitan Museum of Art in New York City as well as his private life.

Dreamscapes was thoughtfully paired with a short film Pearl, which is based on a poem. Pearl’s premise that a visitor brings news about the death of a family member to the elderly woman, who lives alone, would restrict the film to the visit and only two actors. Then, Pearl begins to freely talk about many other visitors in her life, and we encounter several people, who are taking stock or inventory of Pearl’s home and life. Are they real? Who knows for sure! She, however, appears to appreciate them.  Pearl, a 16 minutes long film, was directed by Richard Waterhouse, who attended the screening.  The film became one of the five runner-up movies of the 2012 Christopher and Dana Reeve Award for Short Films.

In this article we will particularly concentrate on some of the two Shorts Screenings, films that lasted between four to twenty minutes. Steve Larson, the Executive Director of WFF and his viewing committee chose approximately 30 films from a much larger pool of submissions. These shorts impressed me and the audience for various reasons:

Glue, 7 minutes, shows a husband going astray and a bored house wife, suspicious of her husband’s continued overtime work, has glued everything in his path in their apartment until he finds her, glued to the ceiling. He promises to unglue her, rushes around, steps on a stool, kisses her, turns over the stool and becomes glued to her lips. The film provides a sure and surprising account of a couple being glued to the hip or lips, as in this case.  (Director Michal Lavi)

Abuelas (The Lost), 9 minutes, Argentinia’s nightmare of murdered young mothers by the military/dictatorship and their lost babies. The grandmothers are searching and finding their grand children, who were adopted by military families. The audience did not vote highly for the film. I find it important to continue screening documentary films in North America about the Argentinian or Chilean dictatorships, their horrors and abuses. (Director Afarin Eghbal)

Paraiso, 10 minutes – It depicts the life of window washers in the city, high above safe ground, just tethered to a rope! It is a Spanish speaking film with subtitles. The film conveys beautifully philosophical attitudes of these men and their dreams to save enough money and escape their dangerous lives for different jobs, before a fatal accident may happen. And sometimes, they experience a surprising view into ‘rich people’s’ lives, while washing their windows. (Director Nadav Kurtz)

Cadaver, 7 minutes. The animated film is written in rhymes and shows a dead man returning one more time to his wife, much to his regret! He finds her already in the arms of his best friend. The film and drawings convey scary and rough effects. (Director Jonah Ansell)

Other Shorts in the first slot were: Cataplexy; Pluto Declaration; The Hipster & The Cat; The Traveler MacWhirr; The Arm and Voice Over. I gave all films at least three points, five being the best.

The 15 minutes long film: Migraine was paired with Gaby, a delightful comedy. Migraines are a subject I know too much about! The fancy shoes salesman experiences a blinding migraine attack, just as he attempts to register and settle into his hotel room. Barely controlling his pain and vision he offends the concierge and other people along his way. Ice from a hotel bucket freeze the pain. He cannot take pain killers, because he is an addict or did he ingest the pills?

At any rate, he attends AA-meetings, finds a sympathetic group and friends in a new city. The viewer is treated to a marvelously eccentric cast of characters. Finally, the fancy shoes salesman offers presents to all he offended: New beautiful shoes. We will not forget the moments, when the hotel concierge is carefully trying on his new pair behind his desk. What joy! The audience awarded Migraine the second best rating of all short films. (Director Matthew Bonifacio)

Then, the second Shorts screening also included: A Short Film; Dr. Breakfast and The Debutante Hunters. The latter shows the commitment of women hunters in the South, who enjoy the outdoors, the hunt, but not necessarily ‘the kill,’ which occurs rarely. Further: 43,000 Feet; Fling; A Morning Stroll. Again, all films received at least an average score.  Here are notations about the films that I and the general audience much appreciated:

The Man at the Counter, 8 minutes, is also written in poetry form. The beautiful poem provides a life lesson for a young man, who is serving daily a cup of black coffee to an older man. The man walks out every time with several packets of sugar. The young man must find out, confronts the sugar thief and learns that sweet sugars are for his very ill wife.  After that encounter the man does not return to the coffee shop again. We watch the boy looking for his customer day after day. Finally, a news paper item reveals that husband and wife had died within two weeks of each other. (Director Brian McAllister)

Performance Anxiety is an 8 minute portrait of a father and son team. The son wants to play his violin in Harvard Square, Cambridge, Massachusetts, for money. They agree that the 11 year old can keep half the money he makes. Cute kids, posing as street performers, can collect a lot of money so it turns out. The other half will be donated to good causes. Cambridge requires a performance license, they apply, get a license and the team begin a season of play with obstacles as well as making a movie about it. Director Charles Merzbacher and his son enlightened the theatre audience with more stories. In return the film was voted third best Short Film.

Screenshot, 6 minutes, is a Facebook story that shows in hundreds of messages what can go awry online! Nude photos appear on Facebook; a young woman is betrayed by her lover and becomes vilified by her Facebook friends for those photos, which the man uploaded without her consent. Facebook friends be aware! Below the film's trailor. (Director Cathal Burke)

Good Luck Mr. Gorski, 15 minutes, started out as a joke that went around in Aerospace circles. Neil Armstrong uttered: ’Good Luck Mr. Gorski’ during his first moon walk. What could that mean? It turns out that young Neil had overheard a quarreling neighbor couple back home. The wife would not perform a certain ‘love making task’ until there was a man walking on the moon. Well, 40 years later, the quarreling couple heard Armstrong’s ‘Good Luck Wish,’ the wife took her promise seriously, performed, and the couple had fallen in love again.  What a delightful and moving film tale! Producer David Jean Schweitzer flew in from California, entertained the audience, and the film was voted fourth best of the Festival.

The film that received the most audience votes Curfew, was paired with Any Day Now, which received the Tribecca Audience Award for narrative feature, a stunning movie! And Curfew, 19 minutes, was given the 2012 Reeve award.  In short: A young man attempts suicide in his bathtub and is interrupted in the act by his estranged sister, who demands that he take care of her daughter, Sophie, for a few hours out of necessity. Uncle and niece do not know each other, yet it is the beginning of a delightful relationship. Sophie's dance at the bowling alley is unforgettable and so the precocious youngster revives three people’s lives!

Hannock has painted and donated framed palimpsests in past years for recipients of the Christopher and Dana Reeve Award and filmmaker, director Shawn Christensen, received the precious painting this year.

Lawson and Joe Thompson, the director of Mass MoCA in North Adams have collaborated on an evening screening at the MoCA - Hunter Center in the past as well. This year’s feature film was Knuckleball and the filmmakers Ricki Stern, Annie Sundberg and Christine Schomer attended an almost full house.

The Clark Art Institute invited WFF and Pulitzer Prize winner Richard Russo for an evening titled: Novel into Film. Williams College professor Jim Shepard and filmmaker Brad Silberling rounded out the panel with Lawson. The audience was treated to several short cuts from three of Russo’s novels, turned into films: Nobody’s Fool, Empire Falls and Twilight as well as discussions about success and pitfalls as they occur during screen writing and filmmaking.

Again, the panel discussion was enjoyed by a large audience. We only wish that all movies screened at Image Cinema were seen by a full house. All deserved it!